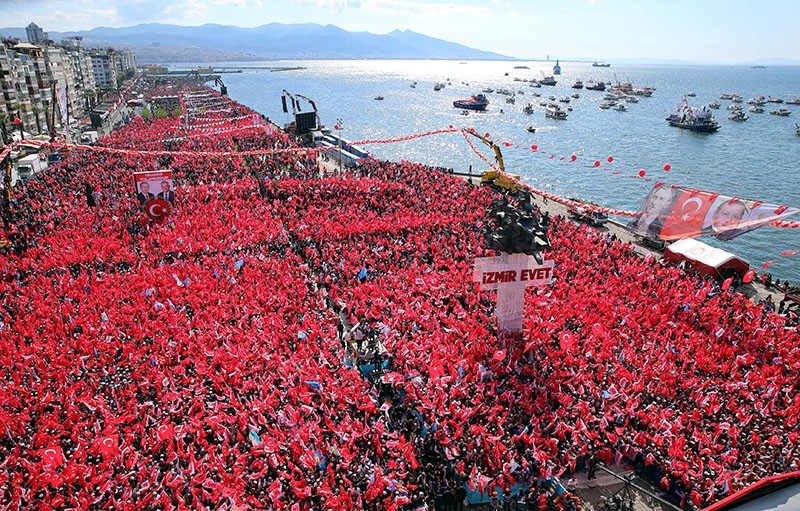 President Recep Tayyip Erdoğan said yesterday that on April 16, Turkey will enter a new phase of strengthened democracy as a result of the "yes"' vote in favor of the constitutional amendment package.

"After April 16, Turkey's democracy will be strengthened. You may work toward convincing people to your opinion however, the result will be the people's choice. Both 'yes' and 'no' voters deserve to be respected by the people," Erdoğan said during a referendum rally in western city of Izmir, responding to the threats raised by some Republican People's Party (CHP) deputies directed at "yes" voters.

Erdoğan criticized CHP Konya deputy Hüsnü Bozkurt for controversial remarks saying that "yes" voters will be thrown into the sea on April 16.

"What an embarrassment this is. What about democracy? What about freedom? Are you going to decide the fate of my vote for me?" the president asked in response.

Bozkurt last week threatened those in favor of the constitutional amendment, saying, "No one should get carried away if the referendum results in a 'yes' win. We will once again hunt you down starting from Samsun, all the way to İzmir [referring to Turkey's War of Independence against European powers]."

In addition, former chairman of the CHP and current Antalya deputy Deniz Baykal, said they will celebrate April 16 as if it were Turkey winning its War of Independence in the case of a "no" vote majority. He further threatened the citizens in support of the constitutional amendment and said "We will drown your entire generation in the sea of İzmir."

Meanwhile, Prime Minister Binali Yıldırım said that those propagating the "no" vote in the referendum are not making any promises for progress, and that they are only trying to maintain the status quo that the prime minister said will result in a political crisis.

"Those who say 'no' are not able to make any promises for Turkey. Those saying 'no' want to have a crisis and want this system that results in military coups to continue. Saying 'yes' means saying 'yes' to change, transformation, and reform," Prime Minister Yıldırım said before Erdoğan took the stage.

Yıldırım also added that the Justice and Development Party (AK Party) does not differentiate between "yes" and "no" voters as they are all equal citizens of the country.

President Erdoğan also criticized CHP Chairman Kemal Kılıçdaroğlu for not taking concrete disciplinary action against deputies within his party for their controversial claims.

In addition, President Erdoğan and Prime Minister Yıldırım highlighted the importance of unity at the grand "yes" campaign rally in Istanbul's Yenikapı square on Saturday.

Similar to the large participation seen in the Izmir rally, thousands of people flocked to Yenikapı Square in Istanbul's Zeytinburnu district to attend the "yes" campaign rally. Over 1 million people reportedly attended the rally on Saturday, where Erdoğan and Yıldırım urged people to vote "yes" in the upcoming referendum.

Stressing how "significant" the referendum is for Turkey's future, Erdoğan said the country's short-lived governments of the past were "signs of instability," noting: "If stability had been ensured, our development would have been twice of what it is now," he said.

On April 16, 55.3 million Turkish people are expected to cast their votes in constitutional amendments that have been on the agenda since Erdoğan's election as president in August 2014.

The changes will abolish the post of prime minister, which the AK Party claims resulted in an ineffective two-headed political system, replacing it with a stronger system, which is expected to produce stability and a more effective governing system in the long term.