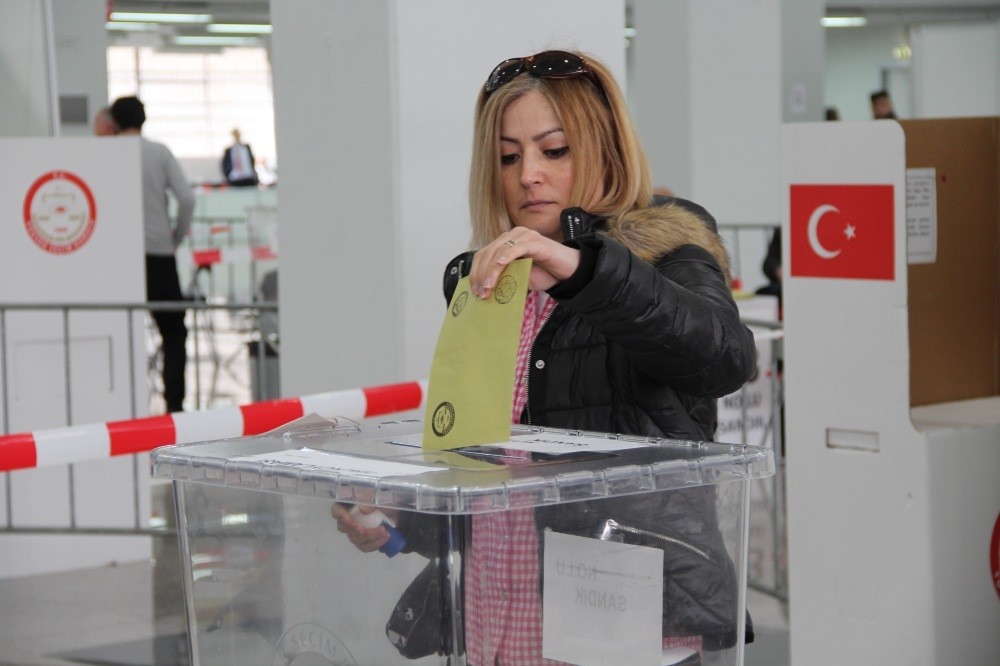 An expat voter casts her vote in the Netherlands, where expat voters flocked to the ballot boxes in Turkish consulates in Amsterdam, Lahey and Deventer.
by Ali Ünal Apr 10, 2017 12:00 am

The undemocratic treatment of some European states against ‘yes' voters and Turkish ministers, coupled with rising anti-Islam tendencies, have led voters to show support in favor of the ‘yes' vote, analysts say, as the participation of expat voters had significantly increased abroad

Amid efforts by some European countries to prevent "yes" votes and interfere in Turkish domestic politics by favoring "no" votes, Turkish citizens living abroad have shown great interest in the referendum for constitutional changes, with as many as 1.5 million Turks casting their votes at designated locations in 57 countries.

Meanwhile, analysts have suggested that the pressure against the "yes" campaign in certain EU states triggered a backlash against the "no" campaign, with many voters voting "yes" to protest against the undemocratic treatment they faced in recent weeks.

Ozan Ceyhun, a former deputy at the European Parliament, speaking to Daily Sabah, said: "Anti-democratic pressures have motivated the Turkish diaspora in Europe and therefore the participation rate has surpassed all of Turkey's previous elections.

In contrast to Europe, which has disregarded democracy, the Turks in Europe have performed their civic duties and once again proved their commitment to democracy. "I also believe that these anti-democratic pressures will have a boosting effect on 'yes' votes.

As Europe resorted to overtly supporting the 'no' campaign, it has unwittingly helped substantially increase the number of 'yes' votes."

As Turkey heads to the home stretch for the April 16 referendum for the 18-article constitutional amendment package to allow the country to switch to a presidential system, Turkish citizens living abroad have casted their votes between March 27 and April 9 with a record turnout.

"They are getting mad, because they watch Turkey becoming stronger. We have double the growth rate of the EU," the president said at a referendum rally in western Turkey's İzmir province.

"European economy is declining. The virus of racism has infected them. This time they have a difficult task. After [April] 16, the EU issue will also be solved. I expect that 'yes' votes will record a major win in Europe," said President Erdoğan while criticizing the growing anti-Islam sentiment in Europe as well as the EU's biased stance against Turkey's accession to the 27-country bloc.

According to sources, as of April 8 more than 1.2 million Turkish citizens casted their votes, and the figure should reach around 1.5 million, more than a 20 percent increase in turnout compared to the November 2015 general election.

Although the main opposition Republican Peoples' Party (CHP) and even members of the PKK terrorist organization enjoyed the liberty to organize rallies in favor of "no" votes across Europe, rallies that favor "yes" votes faced big obstacles. German officials imposed bans on "yes" meetings and the rallies of Turkish ministers on the grounds that they were meddling in the country's internal affairs.

"Throughout the campaign, major European countries openly supported the 'no' bloc and banned conferences and rallies in favor of 'yes' votes. I would like to underline the fact that this attitude was clearly against Europe's fundamental values, such as freedom of expression and right of assembly," said Mustafa Yeneroğlu, AK Party deputy and the chairman of Turkish Parliament's Human Rights Investigation Committee.

"Europe's clear support for the 'no' side increased Turkish people's political awareness and encouraged them to stand united with their motherland. Thus, we have experienced record-breaking turnouts in this referendum. A total of around 1.5 million Turks abroad cast their votes, of which a significant portion was 'yes' votes," he added.

The leader of Germany's Green party urged Turkish citizens in Germany and Turkey to vote "no." Netherlands revoked landing permission for Turkey's Foreign Minister Mevlüt Çavuşoğlu and Family Minister Fatma Betül Sayan Kaya was undiplomatically detained by Dutch police in front of the Turkish consulate before being deported.

Moreover, Dutch police violently used water cannons, horses and even dogs to disperse Turkish protesters in Rotterdam. However, Europe's intervention in Turkish domestic politics was not limited to these tragic examples.

Apart from politicians, European media also tried its best to boost "no" votes. The German newspaper Bild published a controversial article asserting that Mustafa Kemal Atatürk, the founder of the Republic of Turkey, would have voted "no" if he was still alive, and the Swiss newspaper Blick set aside its entire first page to address the Turkish community in Switzerland, urging them to back the "no" campaign.

However, these efforts could not slow down Turkish voters' interest. The Union of European Turkish Democrats (UETD) Deputy Chairperson Asiye Bilgin said that Turks residing in Europe perceive the April 16 referendum as beyond ideology and political parties and view it as a referendum to define Turkey's next 100 years.

"Current crises in Europe, PKK and Daesh terror, the ongoing Syria war and the refugee crisis in the region reveal the importance of a strong and stable Turkey. The future of European Turks is directly related to the future of Turkey. When considering rising racism and xenophobic events in Europe, Turkey existing as a secure and stable country is the greatest assurance for the European Turks." Bilgin said.

"In that respect, the referendum is also perceived as a 'struggle for liberty.'"

Turkish citizens from 54 countries voted in the November 2015 general elections, roughly 39.9 percent of the nearly 3 million Turkish voters who live abroad. The results of last year's national elections abroad included wins for the (Justice and Development Party) AK Party in 23 countries, the CHP in 18 countries and the Nationalist Movement Party (MHP) in one country.

Overall, the AK Party got the highest number of votes abroad in last year's general elections, with 56.3 percent of the votes, followed by the (pro-PKK Peoples' Democratic Party) HDP.

"In this election, there will be about 3.05 million expat voters. When you compare this with voters in Turkey, it equates to nearly 6.5 percent of total voters. As such, the votes will directly affect the referendum," the president of the Commission on Human Rights Investigation in Parliament and the head of the AK Party Overseas Election Coordination Center, Mustafa Yeneroğlu, said earlier, while underlining that Turkish expat voters will play a significant role in referendum results.

Ballot boxes will be sealed when the voting ends and taken to Turkey to be counted. In Turkey, 55.3 million people who are eligible to vote are expected to cast their votes on April 16.