Erdoğan, PM Yıldırım focus on Istanbul on the last of campaigning for referendum 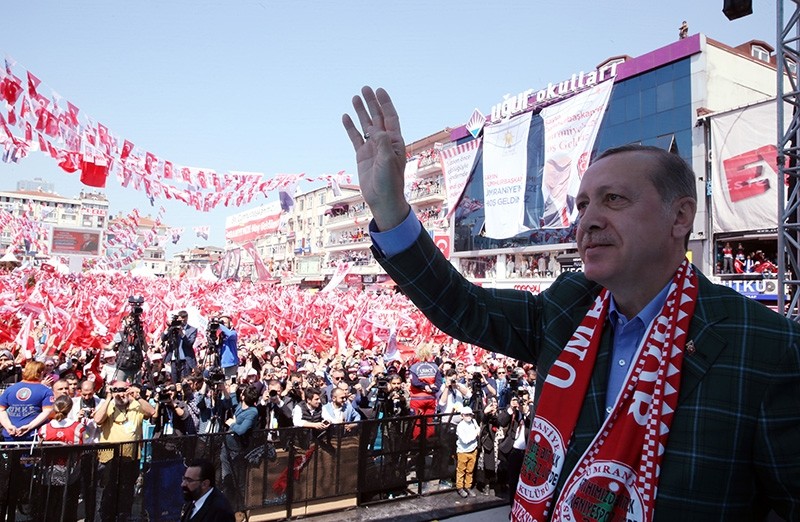 Istanbul witnessed a series of referendum rallies on Saturday as both President Recep Tayyip Erdoğan and Prime Minister Binali Yıldırım met with voters in different districts on the last of campaigning.

Erdoğan addressed Istanbulites in Tuzla, Kartal, Ümraniye and Sarıyer districts, urging the voters to back the proposed changes to the constitution, which include a switch to presidential system.

"Think what will happen if, God willing, the ballot boxes burst with 'yes' votes," Erdoğan said in his opening speech of the day in Istanbul, the first of four rallies on his agenda. "God willing, this nation will have its own feast tomorrow evening."

"Sunday will be a turning point in the fight against terrorist organisations. We will finish what we started on July 15 this April 16," he told a crowd in Istanbul's Tuzla district, decked with Turkish flags and giant pictures of the president.

"Tomorrow is very important, you must absolutely go to the polls," Erdoğan urged the crowd. "Don't forget that the vote is our honour."

"The new constitution will bring stability and trust that is needed for our county to develop and grow," he added, while appealing to the voters of other parties to approve the changes so that "Turkey can leap into the future."

Whereas Yıldırım, who traveled to 51 provinces throughout the campaign, met with supporters in Esenyurt, Avcılar, Küçükçekmece, Başakşehir and Arnavutköy districts.

A tight race between "yes" and "no" votes is being predicted in Istanbul, which is home some one-fifths of Turkey's population.

Erdoğan and Yıldırım held a massive joint rally in Istanbul's Yenikapı Square a week ago on April 8, which was attended by hundreds of thousands of people. Devlet Bahçeli, the chairman of the Nationalist Movement Party (MHP) that also back the constitutional changes, also held a rally in Yenikapı the next day.