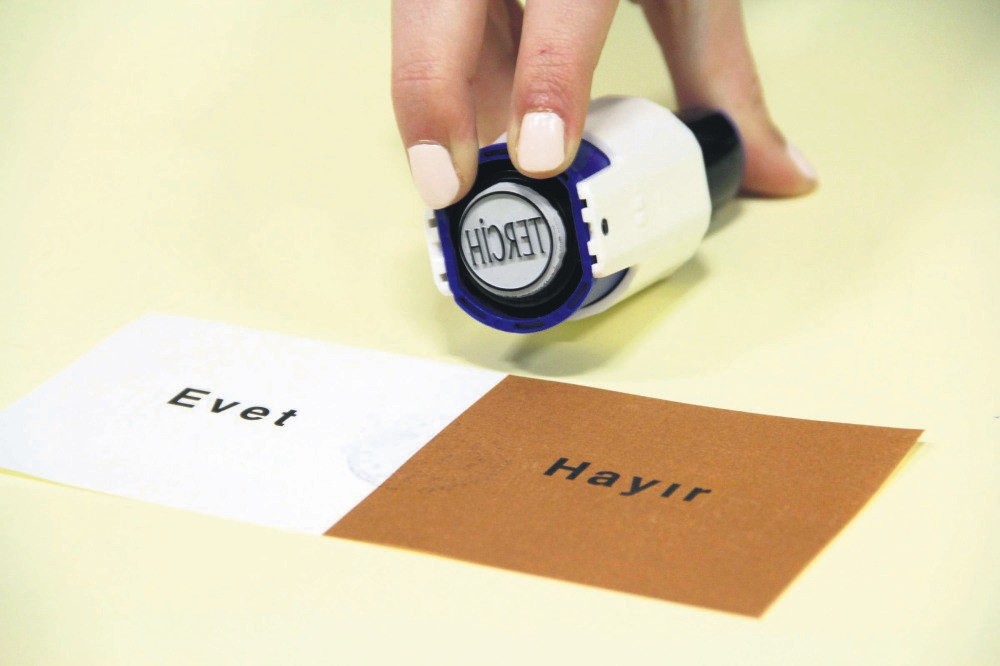 Turkish voters make the final decision on Sunday's referendum over the long-debated constitutional amendments, which will shift the system to an executive presidency, if passed, after a successful, festival-like campaign period by parties in favor of ‘yes' and ‘no' votes

Following a two-month-long constitutional amendment campaign where both "yes" and "no" voters elucidated their positions in a rather festival-like display of democracy, the people now have the last say regarding the Constitution on Sunday afternoon.

The political parties' constitutional amendment campaigns started on Feb. 10 when President Recep Tayyip Erdoğan signed the constitutional amendment package, steering Turkey to a referendum. The political parties have sought the support and favor of citizens through their trouble-free referendum campaigns and via colorful and highly enthusiastic campaign advertising on television channels and streets in Turkey. Prior to the referendum, 339 deputies approved the 18-article amendment package on Jan. 21, which was subsequently ratified by President Erdoğan on Feb 10.

The amendments would give executive power to the president and vice president, while merging the presidency and the prime ministry to establish a more "functional and effective system of governing that is set to clear the way for a separation between the executive, legislative and judicial branches," as politicians described it. The president would also be able to remain affiliated with a political party, while being criminally liable.

Furthermore, the proposed law lowers the age of candidacy for Parliament from 25 to 18 and increases the number of parliamentarians from 550 to 600 in accordance with the growing population. Changes will also be made to the Supreme Board of Judges and Prosecutors (HSYK): The number of HYSK members will decrease from 17 to 15, as military commissions and courts will be abolished.

Other amendments propose that general elections will be held every five years, instead of the current four years, with the presidential election taking place at the same time. The president could appoint presidential aides and ministers, and he also has the right to unseat them. In addition, the Cabinet will be abolished, but there will be ministers.

In the new system, the president would have executive power and authority within the limits of the law, while Parliament would have the power to discuss and change executive decrees and take the country to parliamentary and presidential elections, according to the "yes" campaign. Aside from changing to an executive presidency, other reforms allow the president to maintain a party affiliation. President Erdoğan, for example, has been dwelling on this change, in particular, at rallies.

Meanwhile, there are 55,319 222 eligible voters, with 1,269 282 of the voters 18 years of age. There are to be 167,140 ballot boxes throughout the country with 461 ballots placed in prisons. People can vote from 7 a.m – 4 p.m. on Sunday, April 16, in the provinces of Adıyaman, Ağrı, Artvin, Bingöl, Bitlis, Diyarbakır, Elazığ, Erzincan, Erzurum, Gaziantep, Giresun, Gümüşhane, Hakkari, Kars, Malatya, Kahramanmaraş, Mardin, Muş, Ordu, Rize, Siirt, Sivas, Trabzon, Tunceli, Şanlıurfa, Van, Bayburt, Batman, Şırnak, Ardahan, Iğdır and Kilis. In all other provinces, voting will take place from 8 a.m. – 5 p.m. All referendum campaigning must stop on Saturday at 6 p.m., according to the Supreme Election Board (YSK). Until that time, political parties as well as radio and television channels can conduct their campaigns in both Turkish and other languages.

Minister of Interior Süleyman Soylu announced earlier this week that 251,788 police officers and 128,445 members of the gendarmerie would be on duty. He also said there are to be 51,148 security officers in 26 provinces and an additional 18,675 voluntary security officers. "In addition, we have planned an additional 6,000 Ground Forces personnel in case of necessity." In case of possible electricity cuts, Soylu said the Ministry of Energy and Natural Resources appointed 9,674 patrol officers, including gendarmeries and 8,000 police officers, to critical power distribution units. "Relevant units are to be on duty for 24 hours in case of a possible cyberattack," Soylu asserted. Political party buildings, government institutions and public places will be monitored via security cameras in case of possible threats.