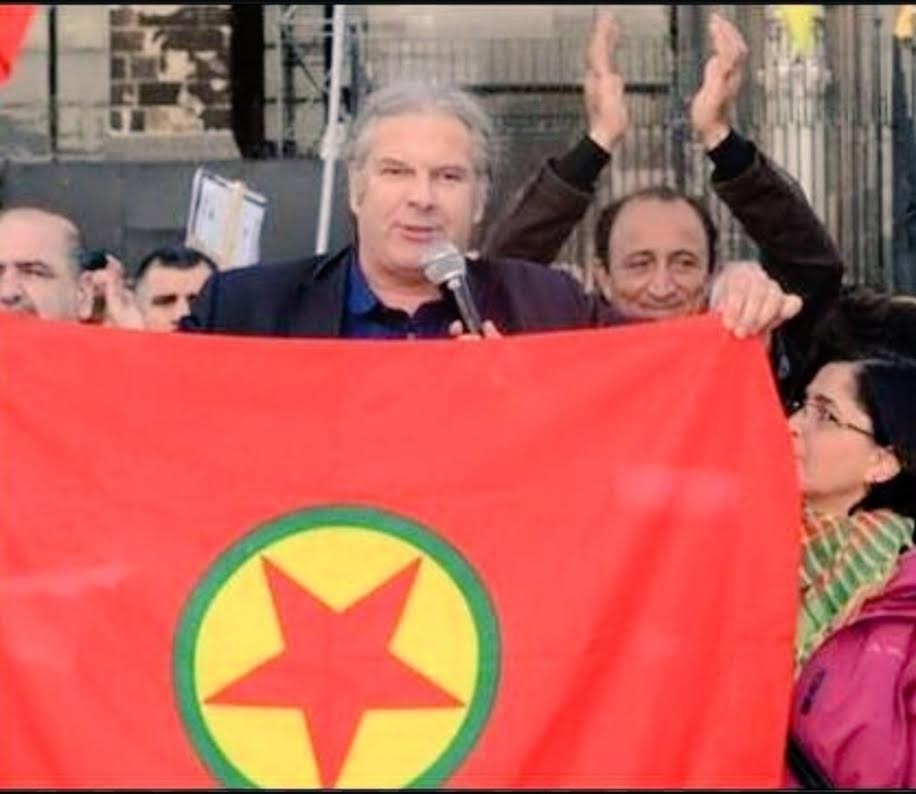 German lawmaker Andrej Hunko seen carrying the PKK flag at a pro-PKK rally in this file photo
by daily sabah Apr 18, 2017 12:00 am

German Left Party (Die Linke) lawmaker Andrej Hunko, who is an observer of the Parliamentary Assembly of the Council of Europe, had previously attended demonstrations held by the PKK terrorist organization. The report released by the Organization for Security and Co-operation in Europe (OSCE) to observe Turkey's constitutional referendum was penned in cooperation by the Council of Europe and OSCE.

The PKK supporter's participation as part of the OSCE & CoE team received criticism from a lawmaker, who urged the Parliamentary Assembly of the Council of Europe (PACE) to apologize to Turkey, while the foreign ministry issued a statement criticizing the report for being biased and prejudiced.

Justice and Development Party (AK Party) lawmaker and Chairman of the Committee on Human Rights Inquiry Mustafa Yeneroğlu urged the OSCE to issue an apology to Turkey for sending a PKK supporter as an observer for the referendum and to toss the report out.

Hunko came to Turkey to observe the referendum as part of PACE's monitoring team in the southeastern Diyarbakır province, even though he is known to be a sympathizer of the PKK group, which is recognized as a terrorist organization by Turkey, the EU and the U.S.

He previously participated in pro-PKK rallies and urged the German parliament to remove the PKK from the terrorist organizations list.

In March, he spoke to a Turkish daily, saying he is in favor of the "No" vote in the referendum. "I hope that people in Turkey will vote 'No' in the referendum" he told BirGün daily, as he criticized the proposed reforms and called President Recep Tayyip Erdoğan a "dictator."

Turkey criticized the OSCE report on the referendum for being "prejudiced" and "unacceptable."

Prime Minister Binali Yıldırım said yesterday that the people have made their choice in free and fair elections and the efforts to overshadow this are "futile."

"The people's will have been reflected in the ballot boxes, and this task has been completed. Everyone, beginning with the main opposition party, needs to respect the decision," said Yıldırım during a Justice and Development Party (AK Party) group meeting in Parliament.

President Recep Tayyip Erdoğan said on Monday evening in Ankara that the "yes" campaign was supported by more than 25 million people. He added, "The change in the constitution, which was accepted with the highest turnout in Turkish history, will benefit our nation."

"The assessment suggesting that the referendum process fell short of international standards is unacceptable," the Foreign Affairs Ministry statement said. Furthermore, the statement added that statements made by OSCE officials before the referendum indicated that they were in the country with prejudice, and disregarded the principles of objectivity and impartiality.

Foreign Minister Mevlüt Çavuşoğlu criticized the German deputy on his official twitter account, saying, "German MP Andrej Hunko posing with the symbol of the PKK terrorist organization is the election observer of PACE. How can one expect objectivity?"

Meanwhile, the German newspaper Bild's political editor, Julian Röpcke, also tweeted on Hunko being sent as an observer, saying, "No idea how anyone could think it's a good idea to send pro-#Kremlin #PKK #YPG #DNR @AndrejHunko as a #TurkeyReferendum @PACE_News observer."

On the Twitter account of another international observer in southeast Turkey, Lorena Lopez de Lacalle, shared numerous tweets from the pro-PKK HDP rallies with party members in the southeast, while also referring to Turkey's pre-dominantly Kurdish province of Diyarbakır as "Diyarbakır, Kurdistan."

Supporters of the PKK, which is officially classified as a terrorist group by Germany and the EU, are allowed to distribute propaganda in Germany, including universities, without fear of restrictions or penalty. The PKK has continued to spread throughout European countries since the early 1990s. In 2002, the European Commission officially classified the PKK as a terrorist organization. Germany outlawed the PKK in 1993 but the group is still active in the country, with more than 14,000 followers. The PKK is also recognized as a terror group by the United States. However, the PKK still enjoys great freedom under the protection of the EU. Ankara has repeatedly warned the EU of the PKK's threat, but the EU continues to allow their activities. Thousands have lost their lives in PKK attacks.

FETÖ has also been reported to be well established in Germany. The terror group, led by U.S.-based Fetullah Gülen, sought to topple the Turkish government and seize power on July 15 through a failed military coup.

A recent report revealed by the Political, Economic and Social Research Foundation (SETA), an Istanbul-based think tank, said FETÖ has been using Germany, the host of the largest Turkish population abroad, as its main functioning center and German authorities have embraced the structures of the group with open arms.

Between 2006 and 2016, Turkey demanded the extradition of a total of 136 PKK terrorists from Germany. The German government agreed to hand over only three of them to the Turkish authorities, the Justice Ministry announced