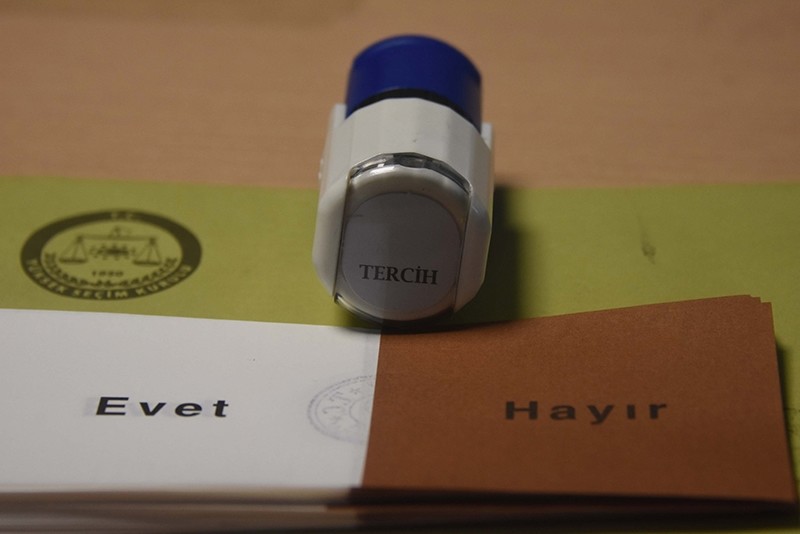 Even though opposition parties signed petititons urging Turkey's Supreme Election Board (YSK) to annul the results of the referendum, official reports signed by their representatives indicate that they unanimously accepted unstamped ballots as valid on the April 16 referendum. Previous rulings by YSK also show that unstamped ballots have previously been accepted as valid after inquiries confirmed the authenticity of the ballots.

An official report signed by ballot box officials in Istanbul's Ümraniye district on April 16, 2017 shows that CHP and Peoples' Democratic Party (HDP) members, Hasan Çelik and Olcay Emir respectively, accepted that the ballots were not stamped but they were indeed authentic.

The report indicates that 48 ballots in ballot-box numbered 3017 were unstamped.

"We have unanimously agreed on the validity of the [unstamped] ballots as there is no uncertainty regarding the voters' will," the report read, indicating that although the ballots were not stamped, they were indeed valid and represented the decision of the voters.

The YSK on Wednesday rejected appeals by main opposition Republican People's Party (CHP), the Peoples' Democratic Party (HDP) and the Patriotic Party (Vatan Partisi) to cancel the April 16 referendum over the debate on unstamped ballots, and a look at previous election decisions shows that this was not the first time. The board had previously accepted unstamped ballots as valid, upon necessary inquiry and investigation confirming the authenticity of ballots. Opposition parties, including the CHP had even appealed to the board in previous elections to count unstamped ballots as valid.

The debate on the constitutional referendum started in the early hours of the announcement of the results, when it was discovered that some of the ballots were not stamped. The YSK immediately launched an investigation, and concluded that the ballots were valid as they were cast on special papers produced exclusively for the board. Furthermore, the board noted that election officials were responsible for stamping the ballots, and such mistakes have occurred in the past elections, therefore declaring the ballots invalid would ultimately punish the voters.

YSK's precedents also show that the board has declared unstamped ballots valid after inquiries confirmed the authenticity of ballots. For instance, in the 1984 local elections, the County Election Council in the town of Akçaalan in Kütahya province declared all votes without stamps were invalid, but the Social Democracy Party submitted a petition to deem the ballots valid. Upon investigating the request, the YSK said that there was no doubt about the authenticity of the unstamped ballots and that it was the Ballot Box Committee's mistake, ruling that the unstamped ballots are indeed valid.

In the 1994 local elections, ballot box committees in Ankara failed to stamp ballots and the County Election Council (CEC) declared that all votes cast with unstamped ballots were invalid, upon objection by the True Path Party. Two applicants then appealed the results to the YSK, which then announced that the aforementioned ballots were valid, in a decision saying that the purpose of Law No. 298 and Circular No. 138 is to prevent election fraud, but that the lack of stamps was the ballot box officials' fault and that an investigation has shown that the aforementioned ballots were indeed authentic. Also in 1994, a similar decision was made for the Salkım town in Nizip, Gaziantep.

In the 2004 local elections, a total of 145 ballots unstamped by the ballot box committee were also declared invalid in southern Mersin province and the opposition Nationalist Movement Party (MHP) submitted a petition to annul election results. However, the YSK ruled that the aforementioned ballots were valid and ordered a recount for the purpose of declaring the winner.