Will Kılıçdaroğlu's march bring him candidacy in 2019 elections? 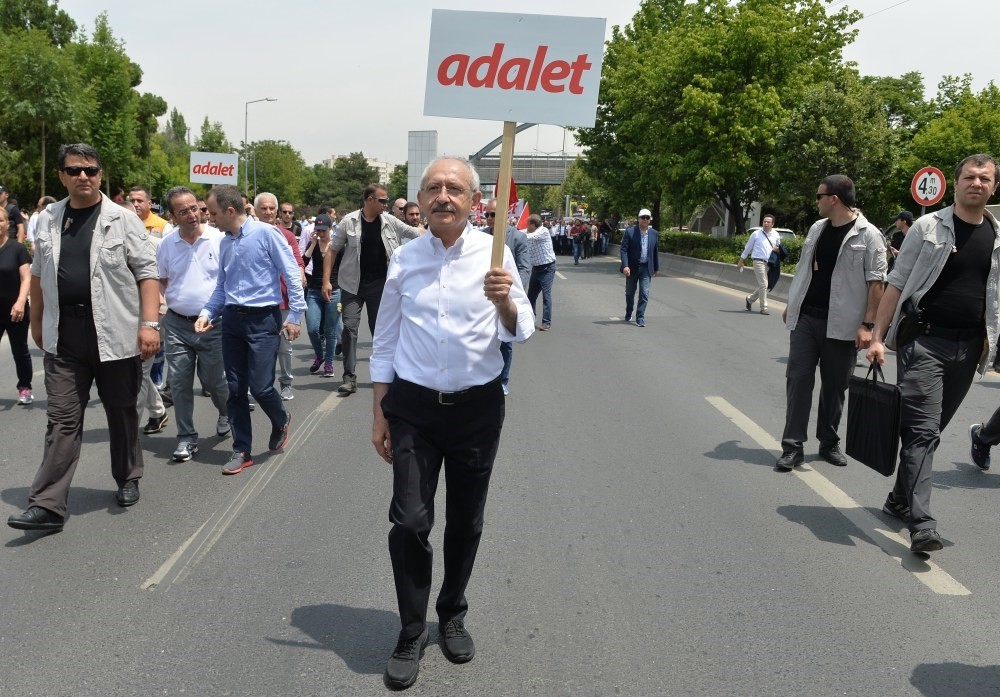 The CHP leader embarks on a 450-kilometer-long march from Ankara to Istanbul, called the 'march for justice', to express opposition to the arrest of CHP Deputy Enis Berberou011flu.
by Mehmet Çelik Jun 17, 2017 12:00 am

Main opposition Republican People's Party leader Kılıçdaroğlu continued the second day of his march from Ankara to Istanbul as a response to the arrest of CHP deputy Enis Berberoğlu. Analysts suggest that if Kılıçdaroğlu completes the 450-km-long journey, it may give him the confidence to become a candidate in the 2019 presidential elections

On Friday, Republican People's Party (CHP) Chairman Kemal Kılıçdaroğlu continued the second day of his 450-kilometer-long journey to Istanbul from capital Ankara after CHP lawmaker Enis Berberoğlu was sentenced on Wednesday over spying charges. Analysts have said that if Kılıçdaroğlu was able to complete the march, it would give him confidence in the party and opposition, which could lead him to become a candidate in the 2019 presidential elections in Turkey. Mahmut Övür, a columnist at Sabah daily, said Kılıçdaroğlu's march is an attempt to release intra-party tensions coming from opposition voices.

"We should wait and see if he finishes the march to Istanbul. However, this is an attempt to release some pressure emerging from intra-party dissident voices." Övür added that while the CHP could not find the courage to become a candidate in the previous presidential elections, his candidacy in 2019 would be beneficial for Turkish politics in general.

The decision to hold the march was taken by the CHP leader following the ruling by Istanbul's 14th Supreme Penal Court to sentence CHP Istanbul Deputy Berberoğlu to 25 years in jail for leaking secret documents to the press with the alleged purpose of political and military espionage in the National Intelligence Organization (MİT) trucks case. The 68-year-old CHP leader is expected to complete his march in Maltepe Prison in Istanbul where Berberoğlu will serve his time. So far, the CHP leader has passed the Ankara provincial borders.

Speaking to Daily Sabah, Şahin Mengü, a former CHP deputy and a renowned figure within the party who has been critical of Kılıçdaroğlu, said it is only natural for Kılıçdaroğlu to be a candidate in the 2019 presidential elections.

"What is more natural than this? Each party comes up with a candidate, and if Mr. Kemal becomes candidate, the party would unite to support him despite some opposition voices."

The government and opposition Nationalist Movement Party (MHP) leader Devlet Bahçeli have criticized the move by the CHP leader, saying a solution should be sought through Parliament and legal processes.

"Justice cannot be sought on the street. Turkey is a state of law," Prime Minister Binali Yıldırım said on Friday in Ankara, calling for respect for judicial decisions.

"There are so many ways to claim your rights. The judicial remedy process is yet to be completed." Yıldırım added that the CHP was among the supporting parties in Parliament for the motion calling for lifting deputies' immunity. In May last year, Parliament voted to strip lawmakers facing trial of their parliamentary immunity.

Foundation for Political, Economic and Social Research (SETAV) Director of Domestic Politics Nebi Miş said the planning for Kılıçdaroğlu's march is not only a result of a decision by the CHP, but was also discussed with other opposition parties that the CHP leader visited recently, including the Homeland Party (VP), the Democrat Party (DP) and the conservative Felicity Party (SP). "In addition, we see that, and we should mention that the rhetoric used during the march is also similar to FETÖ's rhetoric," he added.

Kılıçdaroğlu has repeatedly faced intra-party opposition for his repeated failures in all elections since his chairmanship and not being a strong figure against President Erdoğan and the government.

"When you look at the political figures in the party, Kılıçdaroğlu has always been seen as a weak chairman. He has been overshadowed by other charismatic figures such as former chairman and current Antalya Deputy Deniz Baykal. As a result of his march to Istanbul and gained self-confidence, if he finishes, he could be a candidate in the 2019 presidential elections. This was a risky move; if he is not able to finish, he would lose the chairmanship post as well," Daily Sabah Editor-in-Chief Serdar Karagöz said.

Karagöz added that if the CHP leader successfully completes the march, it would make him a strong figure in the party and that could lead to his candidacy in 2019. However, if he fails to complete the march, it could make him lose his post as party chairman.

"In the previous presidential election, the CHP came up with a conservative candidate more suitable to Turkey's sociological formation. In reality too, it does not seem possible for an ultra-secular, Kemalist candidate to win the 2019 elections. For this reason, the current CHP does not have the self-confidence to come up with a candidate."

Karagöz added that as a result of the march, the CHP could gain some self-confidence and come up with a candidate against President Recep Tayyip Erdoğan, as a candidate from within the party.

The CHP's Berberoğlu is the first deputy to be imprisoned from the party. About a dozen lawmakers from the Peoples' Democratic Party (HDP) are currently jailed, mostly awaiting trial over alleged links to the PKK terror group.

Miş added, "There is still a lot of time until the 2019 elections, so the recent march will help ease the intra-party pressure on Kılıçdaroğlu, however, in the long term, the discussion on Kılıçdaroğlu's place in the party and his candidacy among the opposition will re-emerge again."

Prime Minister Yıldırım also called out the CHP leader as being irresponsible. "Seeking a solution out on the road, calling [people] to the street is irresponsible. … It is not befitting for the main opposition party to complain about our country to the world on the street. If they want a solution, Parliament is the place to find a solution," Yıldırım said.