Erdoğan fights complacency within AK Party ahead of 2019 elections 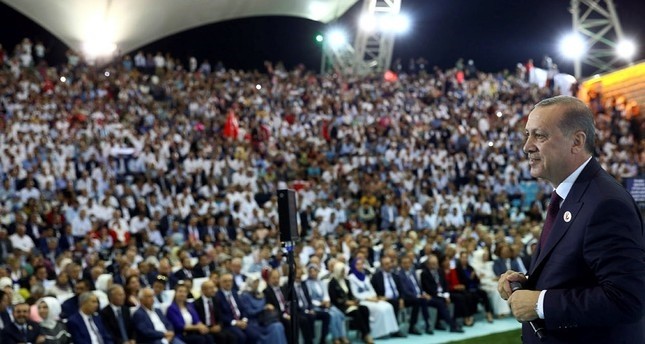 AK Party celebrated its 16th anniversary with a modest event in Ankara with more than 6,000 people participating in the event.
by Yunus Paksoy Aug 16, 2017 12:00 am

Celebrating the AK Party's 16th anniversary in Ankara with a modest event, party chairman President Erdoğan, reiterated his call to party members to put Turkey and the party's interests first and work harder ahead of the 2019 elections

"Nothing will ever be the same in Turkey from today onward," the leader of the recently founded party said on Aug. 14, 2001. The Turkish economy was crumbling at the time and politics had been long devoid of stability. Yet, the party was only slightly more than a year away from recording one of the most astonishing political triumphs in recent Turkish history. Addressing the nation in Ankara's historically symbolic district of Sincan exactly 16 years later, on a hot summer night, the chairman of that party, President Recep Tayyip Erdoğan, laid the groundwork for a sixth successive election victory in 2019.

The number of invitations for the Justice and Development Party's (AK Party) 16th anniversary celebrations exceeded 6,000. Dozens of party veterans were also welcome. As they paraded through the crowd, ancient memories were revived. The likes of former Prime Minister Ahmet Davutoğlu and former deputy prime ministers Bülent Arınç, Ali Babacan as well as Mehmet Ali Şahin, were all present at the ceremony as the party stoked the flames of a march toward the 2019 elections.

The crowd was packed shoulder-to-shoulder in the stands. The audience erupted in excitement as the well-known jingle for President Erdoğan, called Dombra, was played at full volume. Thousands of people chanted his name as Erdoğan sang along.

However, the president does not take people's love for him for granted. Well aware of the need to exceed the 50 percent threshold in the 2019 elections following the constitutional changes in April, Erdoğan has no intention of letting go of the grip.

Minutes before Erdoğan's speech, Prime Minister Binali Yıldırım spoke of 11 million AK Party members. Echoing the statistic, the president made a historic appeal to his fellow voters. "Are you ready to double this in March 2019 and November 2019," he said, referring to the local elections and presidential elections that year.

Complacency within the party seems like President Erdoğan's most formidable foe. Though Turkish citizens have two long years before heading to the ballot boxes, he has already been traveling from district to district to address precious voters.

"We must get 50 percent plus one vote for the victory. Are we ready for this? … Are you in to go from door to door? Are we ready for this?" Erdoğan asked last week in the northern province of Giresun. He questioned his fellow party members' readiness and eagerness to exert more effort than ever to come through.

Deputies, mayors and party members from 81 provinces were all ears as the president bashed some of them for their arrogance. His message was clear: "Our path is clear if we are able to swallow our pride." He had another message: "What the AK Party brought to Turkey is of course very significant. However, no one should count himself responsible."

In his struggle against complacency and arrogance within the party, Erdoğan has even called on those who do not have enough willingness to work for the 2019 elections to step aside. "The party has undergone a lot of changes over the last 16 years, but this time we need a more radical change," he argued on Monday night.

The president concluded his speech as the clock nearly hit 10:30 p.m. Thousands of jubilant AK party supporters walked back home with the soothing thought in mind that Erdoğan is and will be in charge. That being said, he recognizes that many actors and elements must change if he is to be re-elected in 2019 with overwhelming support.