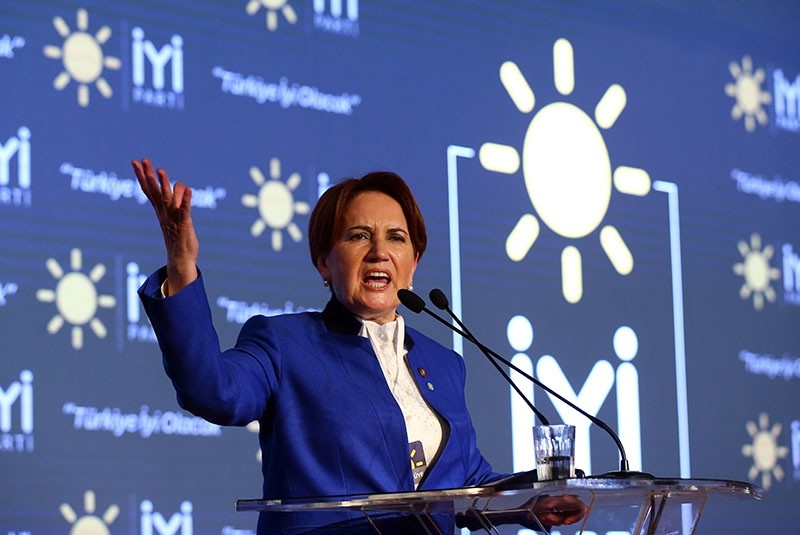 The long-debated new party that is comprised of former Nationalist Movement Party (MHP) dissidents and other centrist and center-right figures was officially launched Wednesday under the name, "İyi Party" (Good Party).

The party will be led by Meral Akşener, who was a prominent name among MHP dissidents who have heavily criticized the policies of the MHP's 20-year chairman, Devlet Bahçeli, after the general elections on June 7 and Nov. 1, 2015.

Akşener filed a petition for the establishment of the party earlier in the day with the Ministry of the Interior and later joined other founding members and supporters at an establishment meeting in Ankara. In a speech, Akşener also hinted at her long rumored nomination for the presidential elections in 2019.

The party's logo features a sun with eight rays over a blue background, bearing a slight resemblance to the ruling Justice and Development Party's (AK Party) blue-orange logo featuring a lightbulb with seven arrows. The party's slogan is, "Turkey will be better [than before]." When written in capital letters, the party's name also resembles to the symbol of the Kayı tribe of Oghuz Turks (one bow and two arrows - IYI), which Ottoman Empire's founder Osman I descended from. The symbol have gained popularity in recent years, mainly due to a popular TV show called "Diriliş Ertuğrul" (Resurrection: Ertuğrul) based on the life Osman I's father, Ertuğrul Ghazi.

Akşener entered politics from the center-right True Path Party (DYP) as a deputy from northwestern Kocaeli province in 1995 and briefly served as Turkey's interior minister between November 1996 and June 1997 in the coalition government with the conservative Welfare Party (RP), which was forced by the military to disband during the Feb. 28 post-modern coup.

She again entered parliament as an Istanbul deputy in the 1999 elections but failed to be elected in 2002 when the number of DYP votes did not pass the 10-percent national threshold by a thin margin.

A well-known figure who appeals to the larger conservative voter base, Akşener was initially a part of the RP dissident movement that later formed the AK Party, which included President Recep Tayyip Erdoğan and former President Abdullah Gül. She later parted ways with the group in 2001 and joined the MHP, serving as an Istanbul lawmaker and deputy parliament speaker between 2007 and 2015.

The founding members include former ministers Ahat Andican and Ayfer Yılmaz from the center-right Motherland Party (ANAP), Aydin Tümen and Burhan Suat Çağlayan from the center-left Democratic Left Party (DSP) and Abdülkadir Akcan from the MHP.

Two former AK Party deputies, Ersönmez Yarbay and Mukadder Başeğmez, and Durmuş Yılmaz, the former governor of the Central Bank of the Republic of Turkey (CBRT), who ran from the MHP in the 2015 elections, are also among the party's founders.

In the past, Akşener has been attacked for allegedly having close ties with the Gülenist Terror Group (FETÖ). In December 2015, Bahçeli claimed that FETÖ was using one of the party's candidates as a "political tool." Akşener's lawyer, Nuri Polat, was among 30 suspects arrested earlier in April for his alleged links to the group.