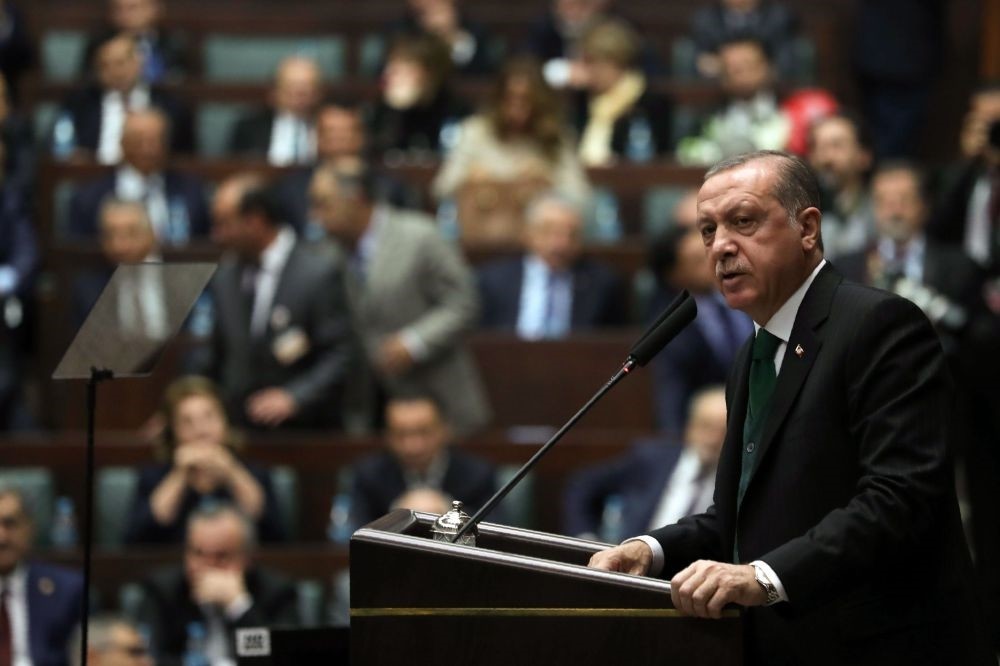 Stressing that the constitutional changes approved in the April 16 referendum will be put into practice with the 2019 elections, Erdou011fan said that his party has already knuckled down to work to rebuild the country's administrative structure.
by daily sabah
Nov 08, 2017 12:00 am

President Erdoğan described the upcoming 2019 elections as more crucial than the Nov. 3 elections, that brought the AK Party to power alone in 2002, and urged all party members to exert afforts to achieve the same success

The Justice and Development Party (AK Party) has already started working toward winning the 2019 elections, which according to party Chairman President Recep Tayyip Erdoğan will be as crucial as the Nov. 3, 2002 elections. Speaking at his party's parliamentary group meeting, President Erdoğan said the upcoming elections "will be as crucial a turning point for the party and the country as the Nov. 3 elections were." "Our party, established on Aug. 14, 2001, finished first in the [2002] elections with 34 percent of the vote and came to power alone. We had a 63 percent majority in Parliament," Erdoğan said, adding that it was the highest percentage since the 1980s.

The president said a new test lies ahead for the AK Party, noting that nothing will ever be the same as the pre-2002 era. Stressing that the constitutional changes approved in the April 16 referendum will be put into practice with the 2019 elections, Erdoğan said his party has already buckled down to work on rebuilding the country's administrative structure.

"The AK Party, which has proved its abilities in service and investment, is obliged to achieve the same success in changing the administrative system of our country," he said.

Erdoğan has long been calling for his fellow party members to wake up before it was too late for the 2019 elections.

In a landmark speech last summer, President Erdoğan said there was "metal fatigue" within the AK Party and rejuvenation was needed.

The president even urged some "fatigued" party members, mayors and local district heads to do the necessary thing and step down. Recently, the public has seen several mayors, including former Ankara Mayor Melih Gökçek, resign to contribute to the rejuvenation process within the party.

The AK Party will kick off its provincial congress at the end of November and is hoping to finish up by March 2018.

The party's cabinet was also reshuffled since Erdoğan's return as chairman on May 21.

In line with his well-known term of "metal fatigue," he said in July that "our fellow friends in successful branches will, of course, continue to perform their duties, but I guess that you can also agree that comprehensive changes are needed in our local administrations."

STATE TO BE CLEANSED OF GÜLENİSTS

Underlining that recent regional and global developments point to a radical restructuring process for the future, Erdoğan said the state mechanism will be cleansed of the Gülenist Terror Group (FETÖ) members.

"We will take everything into consideration and carry out our work. We will plan our next steps according to these," he said.

"It is obvious how they have infiltrated the institutions of the whole state. Now we are in a period of cleansing and recovery. We will continue to do so until the very end in line with what the law requires. Most significantly, we will cleanse the state mechanism of them," he assured.

The president asserted that Turkey has been put in a tough spot by terrorist groups, such as FETÖ, the PKK and Daesh.

FETÖ is accused of masterminding the July 15 coup attempt last year that killed around 250 people and injured hundreds. The terrorist group, which has posed as a religious charity for decades, moved to seize power in two other coup attempts in 2013.

A string of investigations revealed that Gülenists have been involved in a wide array of crimes, from money laundering to orchestrating sham trials to imprisoning critics and conspiring against anyone opposing the clout of FETÖ in Turkey.

Thousands of suspects in the police, military, judiciary and public sector have been dismissed, suspended, detained or arrested for their links to the terrorist group.

As for the counterterrorism efforts, Erdoğan said Turkey's anti-terror operations against the PKK will continue at full speed. "We are heading into winter. There is no such thing [as stopping the operations]," Erdoğan said. "The operation is ongoing. We will not stop. We will push them. Nobody should feel offended."

His remarks came several days after seven soldiers and two village guards were killed fighting PKK terrorists in the southeastern province of Hakkari. Meanwhile, the Interior Ministry announced Tuesday that at least 46 PKK terrorists were killed in military operations in eastern Turkey. Erdoğan said Turkish military commanders are organizing the troops stationed along Turkey's southeastern borders. He said the PKK is a tool being used by foreign powers to disrupt the peace in the region, while Daesh is a bloody terrorist organization with no ties to Islam.