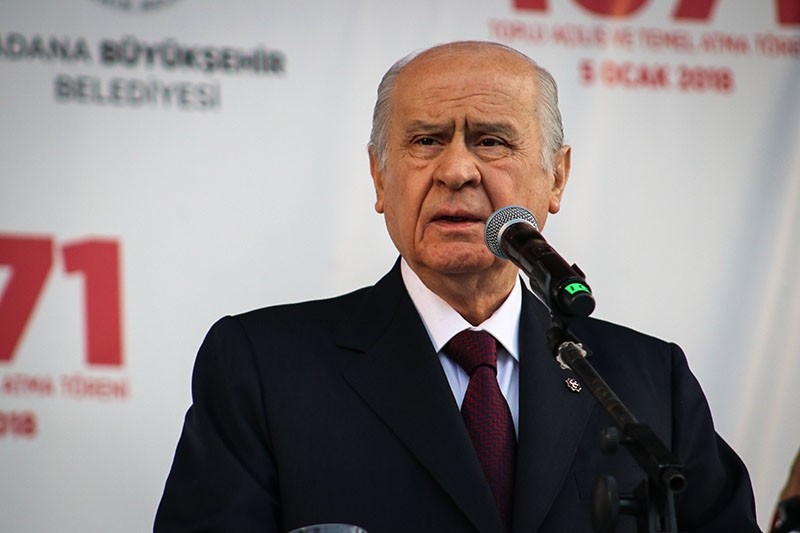 Turkey's nationalist opposition MHP Chairman Bahçeli said Monday that the party would not nominate any candidate for president, instead it will act in the spirit of Yenikapı, referring to a mass anti-coup rally in Istanbul's Yenikapi district held in 2016, and back President Erdoğan in the 2019 election

"The MHP is loyal to the spirit that was initiated on Aug. 7, 2016," he added, referring to the rally that took place in the Yenikapı district of Istanbul on Aug. 7 with the participation of all political leaders, except for those from the Peoples' Democratic Party (HDP), and which is considered a symbol of political consensus following the July 15, 2016 failed coup. "The MHP will act in accordance with the Yenikapı spirit and will make a decision to support Recep Tayyip Erdoğan," Bahçeli said. The MHP had pledged support to the ruling Justice and Development Party (AK Party) in its fight against terrorist organizations following the July 15 failed coup organized by Gülenist Terror Group (FETÖ) members who had assumed places in the military and other state institutions over the past 40 years. Meanwhile, AK Party Parliamentary Group Deputy Chairman Bülent Turan said Bahçeli's remarks were received positively.

"Mr. Bahçeli has taken a step on the issue. Our party will make the necessary statement," Bülent Turan said yesterday speaking to reporters in Ankara. Turan also said forming alliances is the right of political parties, criticizing Republican People's Party (CHP) leadership who complained about the AK Party and the MHP getting closer. "When the CHP gets together with the HDP [Peoples' Democratic Party], you say what a good alliance, but when the MHP gets together with the AK Party, you say, 'What kind of business is this?' Alliance is a right of every party," he added.

Last year, a joint effort of the AK Party and MHP evolved into an alliance to amend the Constitution, and the two parties campaigned for the April 16 constitutional amendment package that switched the country's governmental system into an executive presidential system, which will take effect for the upcoming November 2019 presidential election.

Speaking after the Cabinet meeting, Deputy Prime Minister and Government Spokesperson Bekir Bozdağ also said yesterday that the MHP leader's decision is "pleasing" and welcomed by the AK Party.

The MHP was formed in 1969 by retired Colonel Alparslan Türkeş, who had become the leader of the far-right Republican Villagers Nation Party (CKMP) in 1965. The party mainly followed a Pan-Turkist and ultranationalist political agenda throughout the latter half of the 20th century, but later moderated its views under the leadership of Bahçeli, who took over after Türkeş's death in 1997. The MHP received as much as 18 percent of the vote in the 1999 parliamentary election but slipped below the threshold with 9.5 percent in 2002. It has exceeded 10 percent in elections since and took 11.9 percent in the November 2015 vote.

Referring to the alliance between the AK Party and MHP throughout this process, Bahçeli stressed that the alliance would continue in the upcoming local and general elections in 2019.

The current political party law and election law prohibits existing political parties from entering elections together while keeping their political institutional identity separate. Therefore, legal amendments are necessary to form any kind of alliance between political parties. Responding to questions as to whether there are meetings with AK Party officials on this issue, the MHP chairman said that no formal meetings had taken place yet.

Responding to speculation that the MHP had started discussions about a political alliance after they realized that the party could struggle to surpass the 10 percent electoral threshold to enter Parliament, Bahçeli said that the MHP will have no problem passing the threshold. "They claim one political party [the Good Party] that was established about 15 days ago will pass the election threshold and the MHP will not. These comments are baseless and unfair. The MHP will not have a problem with the threshold even if they decide to increase it to 12 percent," he asserted.

The İYİ Party (Good Party), which mostly consists of former MHP dissidents, was founded in October 2017. Party Chairwoman Meral Akşener was a prominent figure among MHP dissidents who heavily criticized the policies of the MHP's chairman of 20 years, Bahçeli, after the general elections on June 7 and Nov. 1, 2015. The intra-party debate ended when the dissidents were dismissed from the party.

According to a poll by the Optimar Research Company last October, the party did not have enough support and would not be able to pass the electoral threshold. According to a survey of 1,547 participants in 26 provinces, the Good Party's vote share was 6.4 percent. In response to the question: "Do you think that Turkey needs a new political party?" 57.8 percent of participants said that there is no need for a new party.

Bahçeli said that the "instruments of FETÖ" would not be allowed in his party, hinting at Akşener's alleged links to the Gülenist Terror Group (FETÖ). The Good Party has been defining itself as a centrist party and has accelerated its efforts to promote its agenda for the 2019 elections.

Akşener also announced that she will run in the 2019 presidential election. In line with Bahçeli's remarks, polls indicate that the Good Party will likely have a challenge passing the 10 percent threshold in the next election.