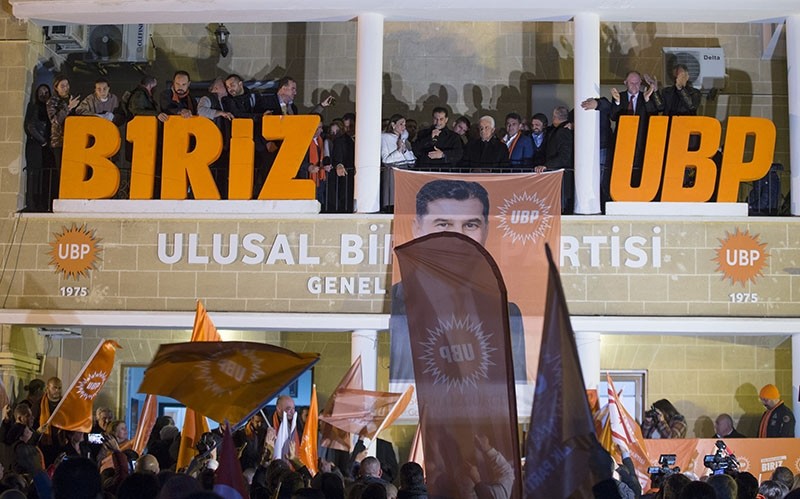 Supporters of the ruling National Unity Party (UBP) celebrate the election results in front of the party headquarters, in Nicosia, Jan. 08, 2017. (AA Photo)
by Compiled from Wire Services Jan 08, 2018 12:00 am

No party has bagged enough votes to emerge as the ruling party in snap parliamentary elections in Turkish Republic of Northern Cyprus (TRNC), which may lead to a coalition government, according to unofficial results Monday.

More than 190,500 people were registered to vote in the TRNC, which was established in 1983 in the wake of Turkey's 1974 military intervention to the island in response to a Greece-backed coup.

The vote comes ahead of presidential polls later this month in the Greek Cypriot Administration, internationally recognized as Republic of Cyprus, with peace efforts on hold until both sets of elections are over.

Six of the eight parties running in the elections surpassed the 5 percent threshold needed for representation in the parliament.

After the announcement of the unofficial results, the UBP party members and supporters gathered in front of the general headquarters of the party and celebrated the results.

"It seems that UBP has come out with success from the box. Our society showed their trust in UBP once again. I feel more responsibility from now on," Prime Minister and Chairman of National Unity Party (UBP) Hüseyin Özgürgün said referring to the poll results that seem in favor of his party.

"Our aim is to serve our people. Of course the names and numbers are not totally decided," he also added.

Özgürgün thanked the Turkish Cypriots for their support.

Serdar Denktaş, the head of the Democrat Party (DP), made a press statement in the party's headquarters after the unofficial results. He congratulated the UBP and said: "I think we don't deserve this result and we will continue our fight."

The election system has some problems, the rule should be reviewed, and the election was held with an unpredictable system of elections, he added.

Votes were cast at 719 polling stations across the country, in the 14th election since 1976, when the TRNC was the Turkish Federated State of Northern Cyprus.

The election in the northern third of Cyprus comes six months after efforts to reunify the island collapsed at a United Nations-hosted peace summit in Switzerland over several sticking points including the withdrawal of Turkey's 45,000 troops.

The election, originally planned for July, was brought forward after tensions in the ruling coalition of the UBP and its junior partner DP, as the opposition pressed for snap polls.

Analysts say a coalition government is the most likely outcome because no one party is likely to win an absolute majority in the 50-seat parliament.

"Every election, like every new year and every new day is a new beginning," President Mustafa Akıncı told reporters after voting.

"I hope and wish that this will be a good beginning for our community."

"Depending on the results, as the president, I will be doing whatever my responsibilities dictate me to do. So we will see what the results will be and we'll take our actions accordingly," he added.

Observers say that the Cyprus problem has not played a central role in the campaign, which focused on bread-and-butter issues like the TRNC's economy, which is still hugely dependent on Turkish assistance.

But a pro-solution government could give Akıncı a better hand to play in any future talks with Greek Cypriots, while a more hardline administration would deal a blow to his authority.

The personal life of UBP leader Özgürgün came under the spotlight during the campaign, after he announced in December that he was getting divorced following reports he had an affair with a well-known Turkish Cypriot actress.

On January 28, the Greek Cypriot Administration is set to hold a presidential election in which conservative incumbent Nicos Anastasiades is the frontrunner.

Anastasiades has campaigned on a pro-peace ticket, vowing to attempt to revive talks with Akıncı, despite the souring of their relationship after two years of tough and ultimately fruitless negotiations.