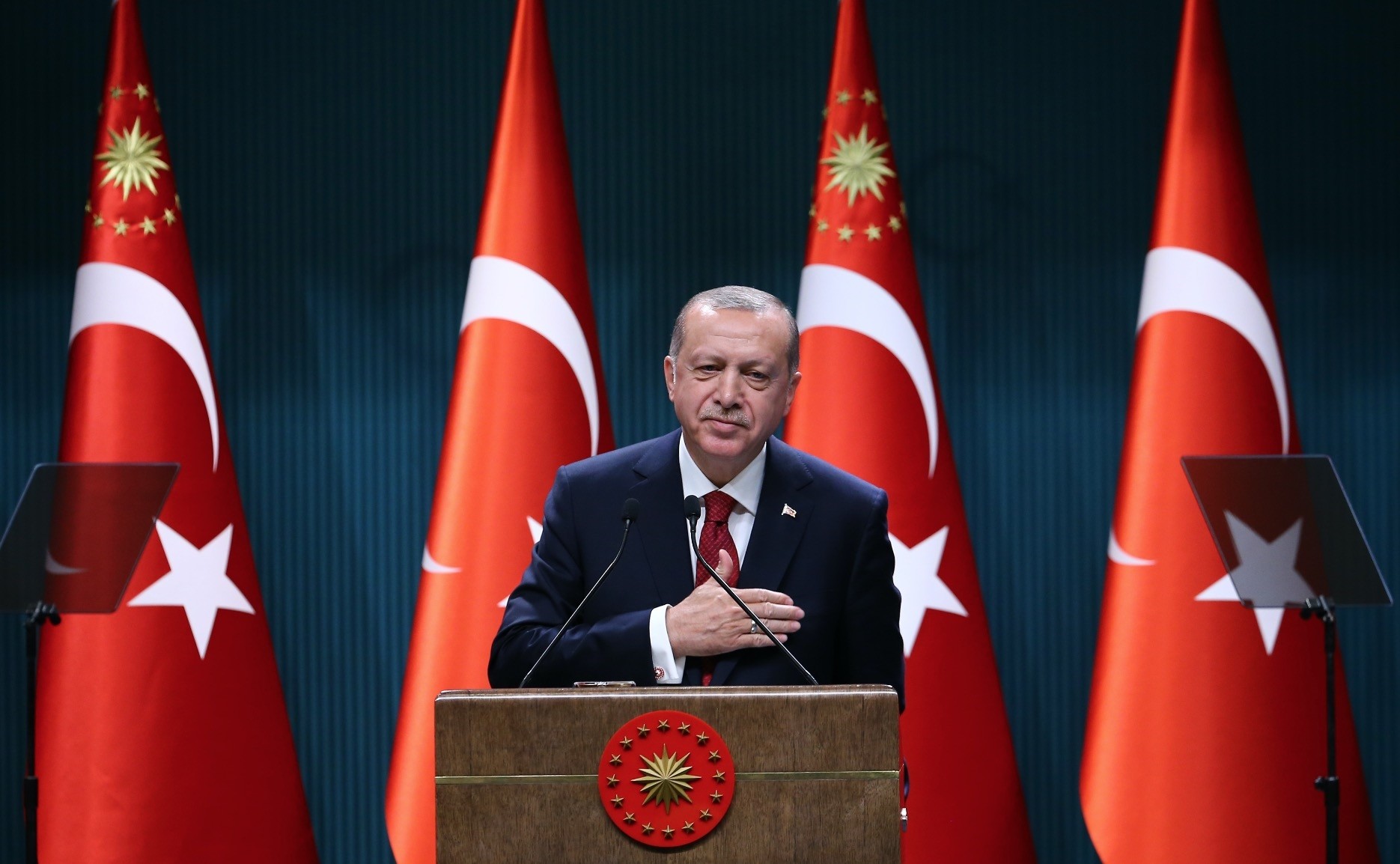 Presidential and general elections were scheduled to be held on Nov. 2019, but the government has decided to change a date following the recommendation from MHP Chairman Bahceli.
by Daily Sabah Apr 19, 2018 12:00 am

After the call for snap elections from MHP Chairman Bahçeli on Tuesday, President Recep Tayyip Erdoğan yesterday announced early presidential and parliamentary elections will be held on June 24

Turkey will hold early general and presidential elections on June 24 instead of the previously declared date of Nov. 3, 2019, the Justice and Development Party (AK Party) chairman, President Recep Tayyip Erdoğan, announced yesterday. Addressing a press conference at the Presidential Complex in Ankara, President Erdoğan said following his meeting with Nationalist Movement Party (MHP) Chairman Devlet Bahçeli that Turkey needs to get rid of all uncertainties looming over the country and that the two parties agreed to hold early general and presidential elections on June 24.

"Turkey is still governed by the system that we can call the old one. Even though it seems as if there is no serious problem, we can be confronted with the diseases of the old system," Erdoğan said. He cited further reasons for early elections and said: "Both the cross-border operations that we carry out in Syria and the historic events originating from Syria and Iraq taking place in our region made it compulsory for Turkey to overcome these uncertainties." Bahçeli suddenly proposed early elections while speaking at the MHP parliamentary group meeting on Tuesday. Bahçeli said: "It should be known that the MHP opts for early elections after the adjustment laws are enacted.

"The presidential governing system is continuously being criticized and defamed with attempts to harm it before it is adopted. At this point, it is not possible or reasonable for Turkey to endure this until the elections on Nov. 3, 2019."

Erdoğan and Bahçeli met yesterday at the Presidential Complex at 1:30 p.m. local time for half an hour. Touching on the alliance between the AK Party and the MHP, Erdoğan said that the July 2016 coup attempt was a milestone for Turkish politics as it was in other areas. He said that the Aug. 7, 2016 Yenikapı Rally sent a clear message to all politicians and that the path to the April 16 referendum was paved by this. He further said that the constitutional changes were made possible thanks to Bahçeli.

He said that there is a very urgent need for the country to make decisions for the future more determinedly: "We discussed it at our executive boards. As a result, we came to an agreement on the issue that we should approach the offer of snap elections positively."

As the AK Party, MHP and other parties prepare to head to the early elections in around 65 days with the most recent decision, the two parties already have an election alliance for the presidential and parliamentary elections. The MHP and AK Party formed what they call the People's Alliance, as Bahçeli previously said the MHP will support Erdoğan in the presidential election. The two parties will also be under the same umbrella for the general elections.

The presidential election and general elections will be held on the same day. All political parties planning to create alliances will have to notify the Supreme Election Council (YSK) at least seven days in advance after the electoral schedule starts. It reportedly takes the YSK 60 days to fully prepare for elections.

"We are immediately launching the legal process regarding the matter, and without a doubt, Turkey's Supreme Electoral Council will also start preparations for the elections as soon as possible," Erdoğan said.

Prime Minister Binali Yıldırım yesterday said the move to early elections would begin "immediately." "The [election] process will start immediately. It should be submitted as a motion to the parliament. It will be ratified by the commission, and later will be discussed at the plenary session," Yıldırım told reporters at the Parliament in Ankara.

After President Erdoğan's announcement, AK Party officials also said yesterday that the bill on planned snap elections would be submitted to Parliament in the evening.

Bahçeli's surprise offer on Tuesday quickly prompted mixed reactions from the AK Party, MHP and main opposition Republican People's Party (CHP). While AK Party authorities referenced yesterday's meeting, the CHP said that it is ready at any time for elections.

The first reaction from the CHP to the suggestion of early elections came from party spokesman Bülent Tezcan, who said that the CHP is ready and that the CHP had previously stated that it is ready for elections. He added that "Turkey is at an impasse," and that the will of the people would break it.

So far, surveys carried out by the A&G Research Company and Andy-Ar found that current support for President Erdoğan's re-election stands at around 55 percent.

It has been slightly more than a year since the April 16 constitutional referendum, which paved the way for the change from the current parliamentary system to a new presidential system. The proposed 18-article constitutional change was approved in the vote, although the country would be run by the new system starting with the 2019 elections. Following the decision, the duty fell on political parties to make the necessary legislative changes in line with the new system. The new system aims at minimizing the sluggishness of state institutions and bureaucratic channels.