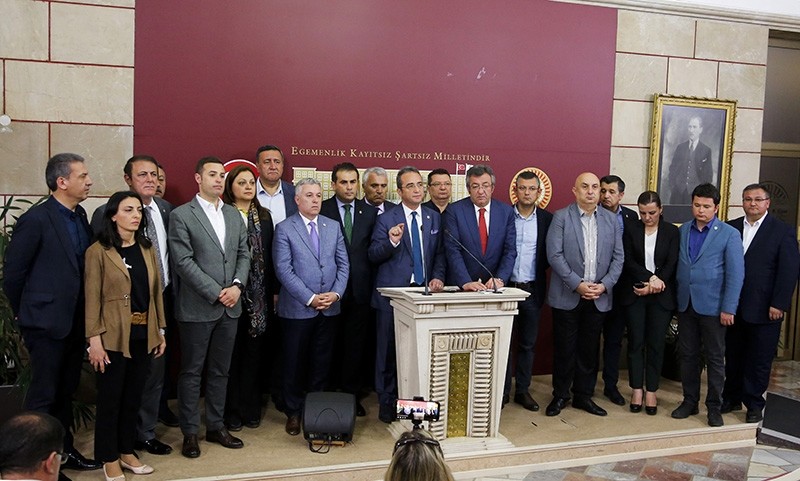 The Supreme Election Board (YSK) has announced Sunday that Good Party (IYI Party) will be eligible to take part in the June 24 elections along with 9 other parties after 15 deputies from the main opposition Republican People's Party (CHP) resigned to join IYI Party.

The CHP deputies joined IYI Party to allow the latter to form a group in the parliament to prevent a possible veto, reports said Sunday.

The reports came after a meeting between the two parties for cooperation in a number issues ahead of the presidential and parliamentary elections rescheduled for June 24 by the ruling Justice and Development Party (AK Party) and the Nationalist Movement Party (MHP), which formed an electoral alliance named "People's Alliance."

The electoral law states that in order to run in the parliamentary elections, a party is required to hold its first congress at least six months ahead of the elections and needs to have established provincial branches in at least half of the country's 81 provinces, or have a group in Parliament.

A party needs to have at least 20 deputies to form a group in the Grand National Assembly of Turkey (TGNA). IYI Party is currently represented with five deputies in the parliament, with four former MHP deputies and one former CHP deputy.

At a press conference in the parliament, CHP Deputy Group Chairman Engin Altay said that the decision is merely a formality to overcome a possible veto by the YSK, although a recent document provided by the Prosecutor's Office of the Supreme Court of Appeals - the depository of political party documents - to the YSK reportedly lists IYI Party among the 10 parties eligible to be placed on the ballot on June 24.

The YSK still not announcing the IYI Party despite the positive view is a political move, not legal, Altay claimed. "Our friends acted as a shield to democracy," he said, adding that their move will prevent further politization of the judiciary.

"Our friends will not go down in history as deputies who left their party. They will go down as heroes who saved the democracy following their responsibility to their party," CHP Deputy Chairman and Spokesperson Bülent Tezcan said.

However, the move also sparked debate inside the CHP with the intra-party opposition criticizing the move. Istanbul deputy Ilhan Cihaner, a former renowned public prosecutor and currently one of the leading figures of the left-wing intra party opposition, tweeted Sunday asking 20 deputies allocated for other minor left wing parties, namely the Freedom and Solidarity Party (ÖDP), the Communist Party of Turkey (TKP) and the Democratic Left Party (DSP) to allow them to participate in the elections.

Cihaner also cited the CHP's by-laws in another tweet, which cites the CHP is a democratic left political party embracing the ideals of the Enlightenment, labor struggles and the principles of freedom, equality and solidarity of the social democratic movement. The IYI Party, which mostly consists of former MHP dissidents, is located at the center-right of Turkey's political spectrum.

Meanwhile, the AK Party officials also slammed the move. "No reasonable CHP voter would accept this movie, these immoral collaborations would be condemned in the conscience of the people," AK Party Deputy Group Chairman Bülent Turan said.

The CHP has 116 members in the 550-seat parliament after the departures.

The debate on whether IYI Party will be eligible to be on the ballot on June 24 stems from the party's recent foundation date and rescheduling of the elections for an earlier than expected date.

Before founding IYI Party in October 2017 along with other prominent MHP dissidents, Party Chairman Meral Akşener was a prominent figure who heavily criticized the policies of the MHP's chairman of 20 years, Bahçeli, after the general elections on June 7 and Nov. 1, 2015. The intra-party debate ended when the dissidents were dismissed from the party after a heated process ended in courts. It has not participated in any elections so far, and its performance in the upcoming elections is highly speculated.

"We have completed our first ordinary congress on Dec. 10. Our 68 provincial and related district branches have been established accordingly. If you count from that date, the IYI Party is ready to participate in the elections as of June 10. I urge everyone to watch their step on this issue. IYI Party is the readiest party to participate in the elections," Akşener previously said.

IYI Party Spokesperson and Secretary-General Aytun Çıray said Saturday that the list provided to the party by the YSK showed that IYI Party, which has only been in existence for a few months, is among the 10 parties that are allowed to participate in the parliamentary elections.