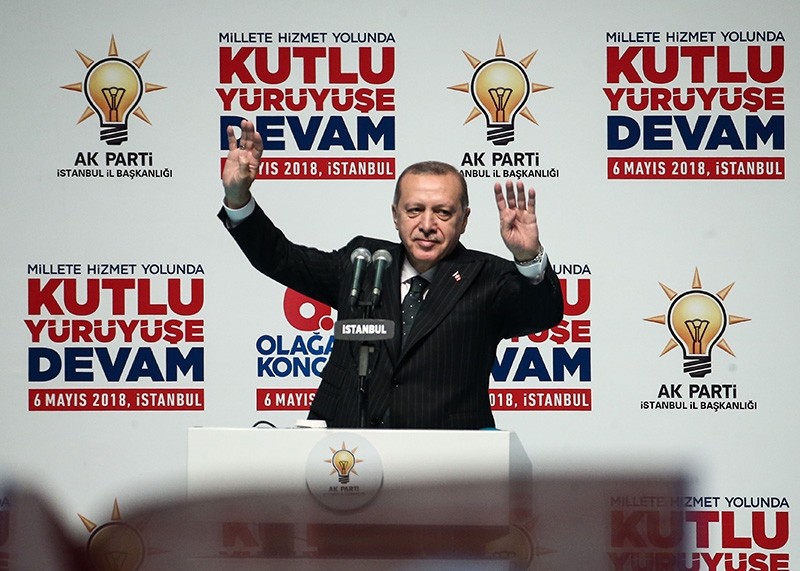 The ruling Justice and Development (AK) Party unveiled its manifesto on Sunday in a mass meeting in Istanbul attended by President Recep Tayyip Erdoğan.

Erdoğan said the June 24 election will be a milestone for Turkey's future. He said his party will continue to struggle to make Turkey an important global power and a leading force.

The President said that Turkey's national income will increase and the gap between income groups will narrow rapidly, and combating corruption, poverty and bans will continue to be among the countries most important goals after the election.

He said Turkey's projects in the domestic automobile and defense industries would be quickly implemented if he is elected.

"As Turkey, our goal is to have 100 percent indigenously-made land, air, sea defense systems," Erdoğan said.

Regarding Turkey's EU membership, Erdoğan said that Turkey will continue its goal of joining the 28-nation-bloc.

"We have never given up on our goal of full membership to the EU although lately we did not see the same determination and desire from our counterparts," he said.

"Independence, national interest, national security and conscientious stance, the principles of our foreign policy, will remain unchanged. We will not patronize other countries, just as we do not accept being patronized," the President said, stressing that his party is determined to continue diplomacy at an equal level with its counterparts.

Erdoğan also mentioned his determination to clear Turkey's borders of all terror groups. "We will launch new operations similar to Operation Euphrates Shield and Operation Olive Branch within our new term to eradicate all terrorists from Turkey's borders," he said.

Erdoğan has served as president since 2014 -- Turkey's first president elected in a popular vote. Before that, he served as prime minister, from 2003 to 2014.

Should he win the June 24 election, Erdoğan would be Turkey's first leader under the presidential system, doing away with the prime minister's post, among other changes.

The president also said at least 4,415 terrorists have been "neutralized" since the launch of Operation Olive Branch in Syria.