Erdoğan says youth will lead way in next term 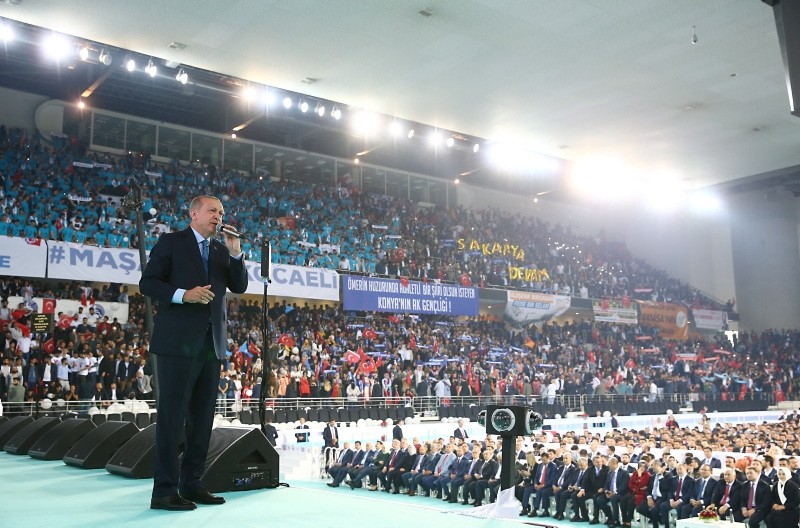 President Recep Tayyip Erdoğan said Friday that the upcoming June 24 presidential and parliamentary elections will be elections determined by young voters, stressing his strong belief and trust in young voters and politicians in the country.

Speaking at the congress of the ruling Justice and Development Party's (AK Party) Ankara youth branches, Erdoğan said, "There is no other political party in Turkey that trusts young people and relies on them as much as we do."

"Inspired by youth, we have announced our objectives for 2023. We have entrusted our visions for 2053 and 2071 to young people," he added.

The ruling AK Party has long been stressing that young people need to be more active in politics and play a pivotal role in shaping future policies.

Previously, Erdoğan had highlighted the significance of dynamism in politics and launched a rejuvenation process in his party, lamenting sluggishness that he had termed "metal fatigue." Party sources said 52 percent of the AK Party's local administrations have changed in line with the needs of the party.

In line with emphasis on youth, the referendum held on April 16, 2017, which paved the way for constitutional amendments, lowered the minimum age of eligibility for Parliament from 25 to 18, which is expected to increase active participation of young people in politics.

"We said the age for eligibility to be elected and elect should be 18. We lowered the age to 18 as we have trust in young people," Erdoğan added.

As young people aged 18 will be able apply for candidacy for the first time, it is believed that interest in the elections among young voters will rise, as well.

In addition, there are also 1.5 million new, young voters who will be participating in the elections for the first time on June 24.

As a country that already has a huge young population, with 16 percent of its overall population consisting of young people between the ages of 15-24, which is the biggest percentage among the European countries, Turkey's political future is expected to be highly affected by the young voters' preferences.

Referring to the AK Party's manifesto announced last week, Erdoğan stated that there were special remarks addressing youth. Erdoğan added, "Young people will not be ordered around; we will work alongside you." He also called on them to join efforts to implement the new presidential governing system. Turkey will shift to a presidential governing system from the parliamentary one with the elections in June.

Underlining the successes of historical figures at very young ages, Erdoğan told young supporters that they could achieve success at a young age, as well.

The president also highlighted that the AK Party has been ruling the country for 16 years and managed to bring about many changes in the lives of people by upholding many democratic rights and liberties. He said that Turkey has grown 3 1/2 times larger over that span and added that there are major differences between before the AK Party came into power and the current situation of the country.

Erdoğan, Turkey's first popularly elected president, has served in the post since 2014. Before that, he served as prime minister from 2003 to 2014. If he wins the June 24 election, Erdoğan would be Turkey's first leader under the presidential system, doing away with the prime minister's post, among other changes.

Prior to founding the AK Party in 2001, Erdoğan was mayor of Istanbul, the home of nearly one-fifth of Turkeys' population, from 1994 to 1998.

Speaking before Erdoğan, Prime Minister Binali Yıldırım addressed the crowd of around 25,000 supporters. "You are not only illuminating our beautiful country, but the entire region," Yıldırm told the young AK Party members.