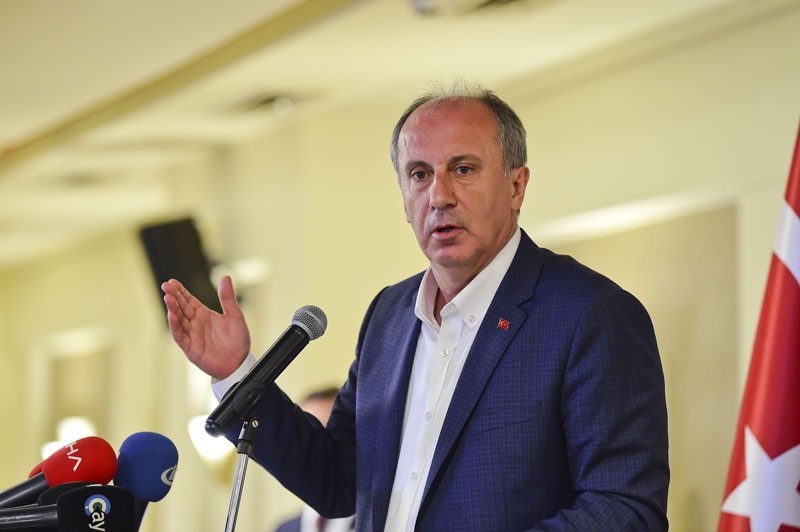 CHP presidential candidate Muharrem Ince speaks at an event in the Black Sea Region's Trabzon province, May 11. (DHA Photo)
by Daily Sabah May 12, 2018 12:00 am

The main opposition Republican People's Party's (CHP) Presidential candidate Muharrem İnce said Friday that he would support the Good Party's (İP) candidate Meral Akşener, if she accepts him as the vice president, in case she is qualified to race in the second round of the presidential elections on June 24.

"If she makes me her vice president [if elected], I would accept it. I wouldn't mind," he told reporters in the Black Sea Region province of Trabzon, while adding that he would even campaign for her to win since the main concern of his is the sake of the country rather than having a position for him.If none of the six presidential candidates pass the 50 percent threshold in the first round of elections on June 24, then a second round will be held on July 8, which would then be competed between the top two candidates from the first round.

On May 4, the center-left secularist CHP announced İnce, who is a CHP deputy of Yalova province, as its candidate for the presidential race against President Recep Tayyip Erdoğan after many days of waiting. A strong rival against current CHP chair Kılıçdaroğlu from within the party, İnce comes from a moderate conservative background. The 53-year-old deputy is also portrayed as a populist and a pragmatic figure.The CHP Chairman Kemal Kılıçdaroğlu said İnce is pursuing a successful campaign as a presidential campaign so far."I find [the performance of İnce] pretty good. He is following a successful path, I hope he continues this way," he said during a televised interview on CNN TURK late Thursday.While the ruling Justice and Development Party (AK Party) and the Nationalist Movement Party (MHP) solidified their cooperation for the June 24 elections, CHP leader Kılıçdaroğlu had looked for a presidential candidate for a long time as he made it clear that he would not become a candidate. Despite meetings with the far-right İP and the Islamist-conservative Felicity Party (SP), an agreement to nominate a joint candidate to run against People's Alliance's candidate, Erdoğan, was not reached and the İP and SP announced their party leaders as presidential candidates.