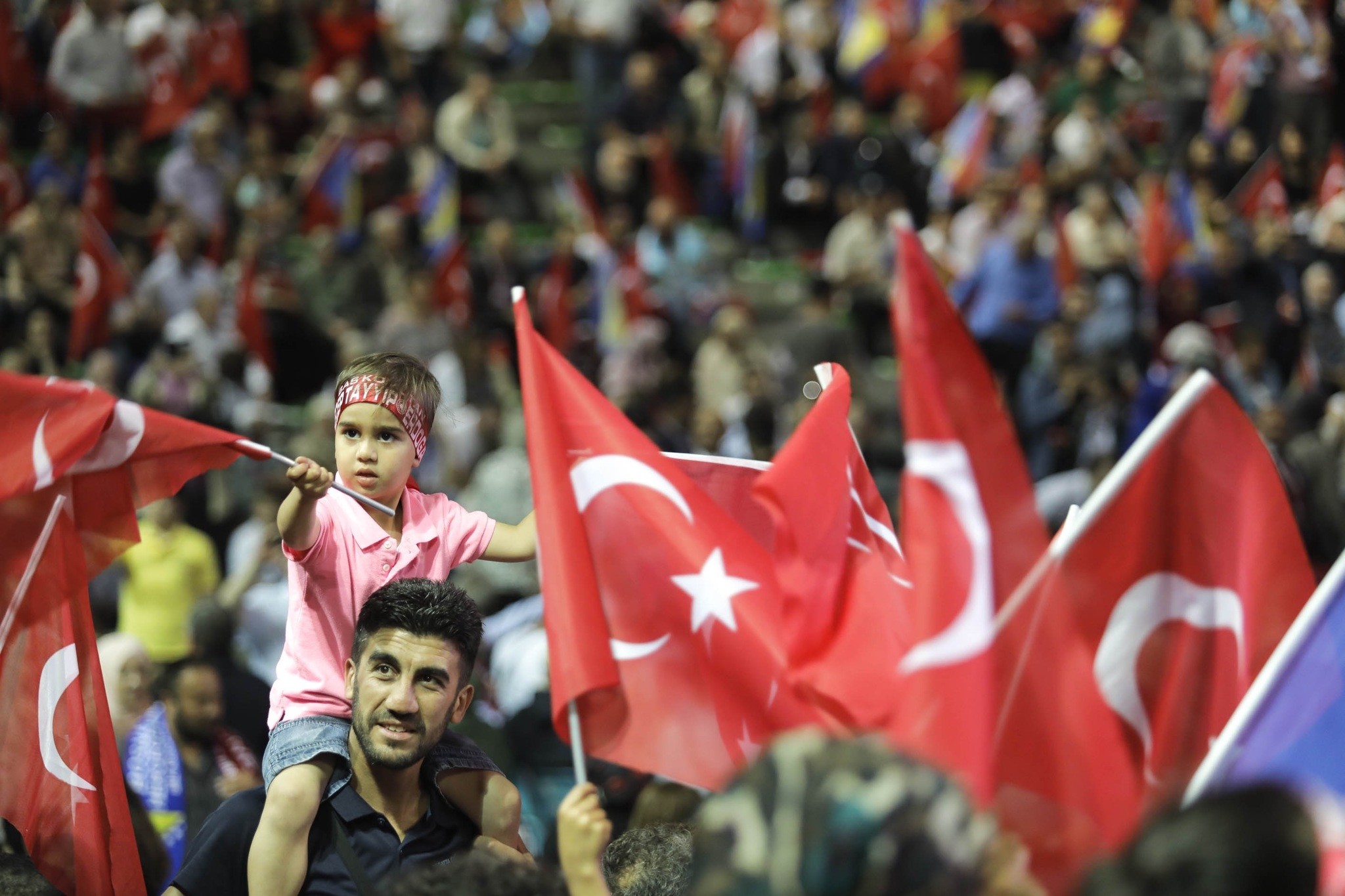 Approximately 20 thousand Turks, who live in Europe, gathered in Sarajevo, the capital of Bosnia-Herzegovina, to meet with President Recep Tayyip Erdou011fan yesterday.
by daily sabah
May 21, 2018 12:00 am

Circumventing the bans imposed by various European governments, including Germany and Austria, the ruling Justice and Development Party (AK Party) held an election rally in Sarajevo, the capital of Bosnia-Herzegovina, with President Recep Tayyip Erdoğan calling on thousands of European Turks who attended to preserve their national values. Erdoğan, who also met with local officials, addressed around 20,000 Turkish people from all across the continent, at the historical Zetra Olympic Hall. The rally is part of the AK Party's efforts to reach more than three million Turkish voters living in the continent before the June 24 presidential and parliamentary elections.

Erdoğan is the presidential candidate for the AK Party. Since 2014, Turkish citizens abroad have been able to vote in elections at special voting booths, becoming a significant force in local elections. Addressing the audience at the event, he urged the Turkish community to raise generations who achieve a proper education and learn the language of their host country, but who also preserve their values and remember their Turkish identity. Speaking to Daily Sabah, Yaşar Oktay, North Germany Representative of the Union of European Turkish Democrats (UETD) underlined the significance of the event as the union has seven candidates who will run for election to represent the Turkish diaspora in Europe.

Oktay added that despite approximately 20,000 people came together, more had attempted to come but faced difficulties at Crotia's Dubrovnik border gate while entering Sarajevo.

The UETD said some 10,000 people are expected in the rally from Germany, which has the largest Turkish diaspora population, with approximately 1.4 million Turks eligible to vote in June's elections for parliament and the presidency. The total number of Turkish voters throughout Europe is more than 3 million.

Oktay underscored that the AK Party has been having difficulties carrying out election campaigns in Europe, particularly in Germany, saying there is no chance to organize such events in the country. "There is a big hypocrisy between the German government's attitude toward the AK Party and other parties in their election campaigns. Especially the Peoples' Democratic Party (HDP), which can use all resources and easily find locations but we can't even use marriage halls owned by Turkish citizens," he said.

Before the rally, Erdoğan held a one-on-one meeting and inter-delegation talks with Bakir Izetbegovic, the Bosniak member of the tripartite Presidency of Bosnia and Herzegovina.

In a press conference held after the meeting, Erdoğan said that Turkey will continue to provide all kinds of support for the maintenance of Bosnia and Herzegovina's stability, peace and welfare.

He also spoke of an alleged assassination plot targeting him in Bosnia, which will not stop him from moving forward. The Turkish National Intelligence Agency (MİT) reportedly conveyed intelligence about a possible assassination attempt to target the president during his visit in Bosnia. The President added that mutual efforts will help to get rid of the presence of the Gülenist Terror Group (FETÖ) in Bosnia.

The early election in Turkey is set to accelerate its transition to the new presidential system.

The event in Bosnia and Herzegovina was the only rally Erdoğan is scheduled to conduct in Europe ahead of the vote. Supporters arrived from across Europe, including Austria, Belgium, Scandinavia, the Netherlands, Switzerland, Italy and Hungary.

Many European governments, including Germany, had previously barred Erdoğan from staging political events on their territory. In April, Austria and the Netherlands also said they would ban any campaigning by Turkish politicians on their soil for the June elections.

Izetbegovic said last week that "We will show that he (Erdoğan) has friends and that there are those who are proud of him."

Turkey has excellent relations with Bosnia and Turkish companies have played a major role in the country's reconstruction following its 1990s interethnic war.

Half of Bosnia's 3.5 million citizens are Muslims, a third are Serbs, while Croats make some 15 percent of the population.

Erdoğan also adressed students at the International University of Sarajevo, where an honorary doctorate will be awarded to the president.