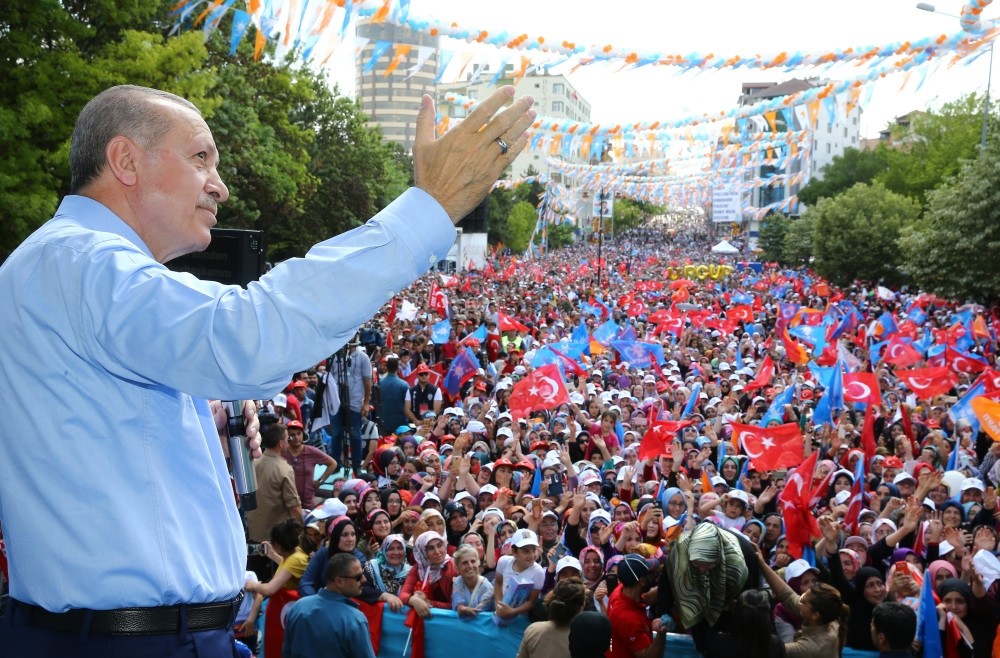 Speaking during his rally in Nevu015fehir, President Erdou011fan criticized the opposition for being clueless on the improvements in the country.
by Daily Sabah Jun 09, 2018 12:00 am

President Erdoğan continues his rallies for the upcoming election, stating that People's Alliance will remain strong despite the oppositions' aim to harm

President Recep Tayyip Erdoğan said on Friday that those who want to create trouble in the People's Alliance will not succeed.

Speaking to people during a rally in the central province of Nevşehir, President Erdoğan said that some people aim to create trouble among the voter base of the People's Alliance, which was formed between the ruling Justice and Development Party (AK Party) and Nationalist Movement Party (MHP) for the upcoming election, but they will not let them to reach their goals.

"The ones who are the so-called 'Nation Alliance' will learn their lesson on June 24," Erdoğan said, referring to the opposition parties', mainly the Republican People's Party (CHP), Good Party (İP) and Felicity Party (SP), alliance attempts against the People's Alliance.

The idea of forming a political alliance between AK Party and MHP for the presidential elections emerged after MHP Chairman Devlet Bahçeli announced that his party will not name a candidate for the 2019 presidential elections and will support the re-election of President Recep Tayyip Erdoğan. The right-wing Great Union Party (BBP) also later announced that it would join the AK Party's and MHP's center-right election bloc the People's Alliance, and support Erdoğan as their joint candidate.

"No one can return Turkey back to the old days of the past that are full of crisis," the president said. "Yet," he added, "the opposition still mentions returning to the former [parliamentary] system following June 24." Expressing that this was an attempt to overlook the will of the people who voted for a system change in last years' April 16 referendum. Erdoğan also emphasized that there were many discussions continuing behind closed doors to take away the nation's will.

Turkish voters narrowly endorsed an executive presidency in the April 16 referendum with 51.4 percent of the votes in favor of it. The "yes" campaign was backed by the AK Party and the MHP while the CHP had campaigned for a "no" vote.

The president also criticized opposition parties and presidential candidates for being clueless on the improvements in the country.

"They [the opposition] say that they will provide free health service for the ones who are younger than 18. Are you sleeping? When I was the prime minister, we had already provided health insurance for ones under 18," said Erdoğan, stating that the opposition does not even do its homework before talking to the people.

The AK Party has always said that it will build, while others say they will destroy, Erdoğan further said.

The president also said that in 16 years there has been TL 7.2 billion ($1.6 billion) worth of investments in Nevşehir, while ensuring that there will be more in the next period.

President Erdoğan kicked off his election campaign on April 28 from the CHP'S stronghold in the western province of İzmir. At the end of the election process, Erdoğan is expected to have visited around 50 provinces and more than 20 districts, meeting with voters across the country.