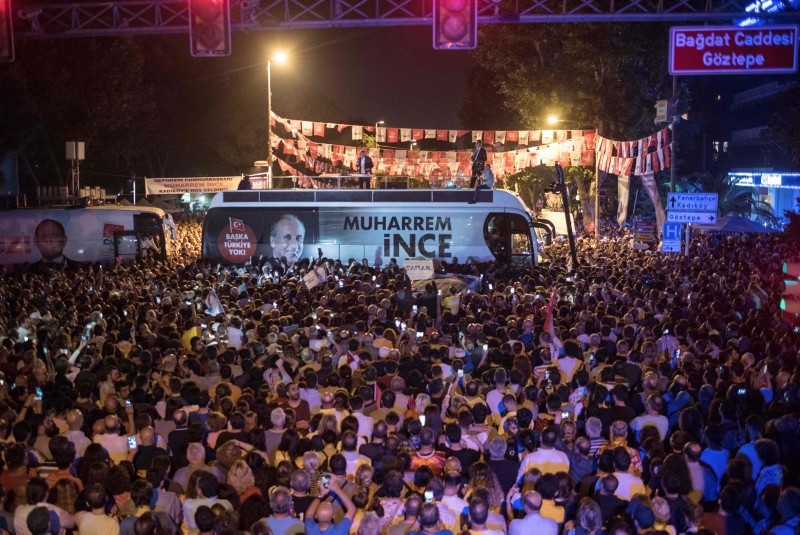 Presidential candidate of Turkey's main opposition Republican People's Party (CHP) Muharrem Ince speaks to supporters on top of a bus during an election campaign rally in Istanbul on June 9, 2018. (AFP Photo)
by Daily Sabah Jun 09, 2018 12:00 am

A rare nighttime election event attracted tens of thousands of people in Istanbul's upscale Bağdat Avenue early Saturday as the main opposition Republican People's Party's (CHP) presidential candidate Muharrem Ince was in the spot for a march and rally ahead of the June 24 presidential elections.

Held in Istanbul's Asian district of Kadıköy, which traditionally votes for the center-left and secularist CHP by a landslide, the rally managed to attract various profiles, from those waiting for the pre-dawn meal before fasting in Islam's holy month of Ramadan, known as the sahoor, to those attending the rally as an alternative to cap the Friday night entertainment.

Fan groups from Istanbul giants Fenerbahçe, Galatasaray and Beşiktaş also attended the rally and flared torches during the 2.5-kilometer march, prompting an entertaining reaction from Ince, who complained that he barely ate during 35 days of campaigning but instead inhaled torch smoke in rallies. He said that the rally in Kadıköy was his 76th election meeting in the last 35 days.

Answering to President Recep Tayyip Erdoğan's call on him to quit politics if he loses the elections earlier on Friday, Ince said that he will quit on the condition that Erdoğan joins him in a televised debate before the elections. Before being nominated by the CHP administration to run as the party's presidential candidate, Ince, a deputy from the northwestern province of Yalova, unsuccessfully ran twice against CHP Chairman Kemal Kılıçdaroğlu in party congresses in 2014 and 2018.

Ince vowed to decrease the income gap between the rich and the poor, emphasizing that the highest pension in Turkey is nine times higher than the lowest pension, while this difference is only two times in Finland.

A former physics teacher, Ince said that he will reform the education system to reverse Turkey's brain drain. "Everywhere in the world the poor are unhappy but the rich are happy. It is different in Turkey, both the rich and the poor are unhappy. This is because the rich do not see assurances regarding their future. And the brightest kids in Turkey are going abroad," he said.

Ince said that three language courses would be offered in classes, one being Turkish as the official language, one being mother tongues, primarily aimed at the country's Kurdish minority, and an additional foreign language. He also promised to remove compulsory religion classes, and introduce comprehensive elective religion classes instead.

Ince said that the final rally of his campaign will be held in Istanbul on June 23, adding that he expects two million people in the mass meeting.