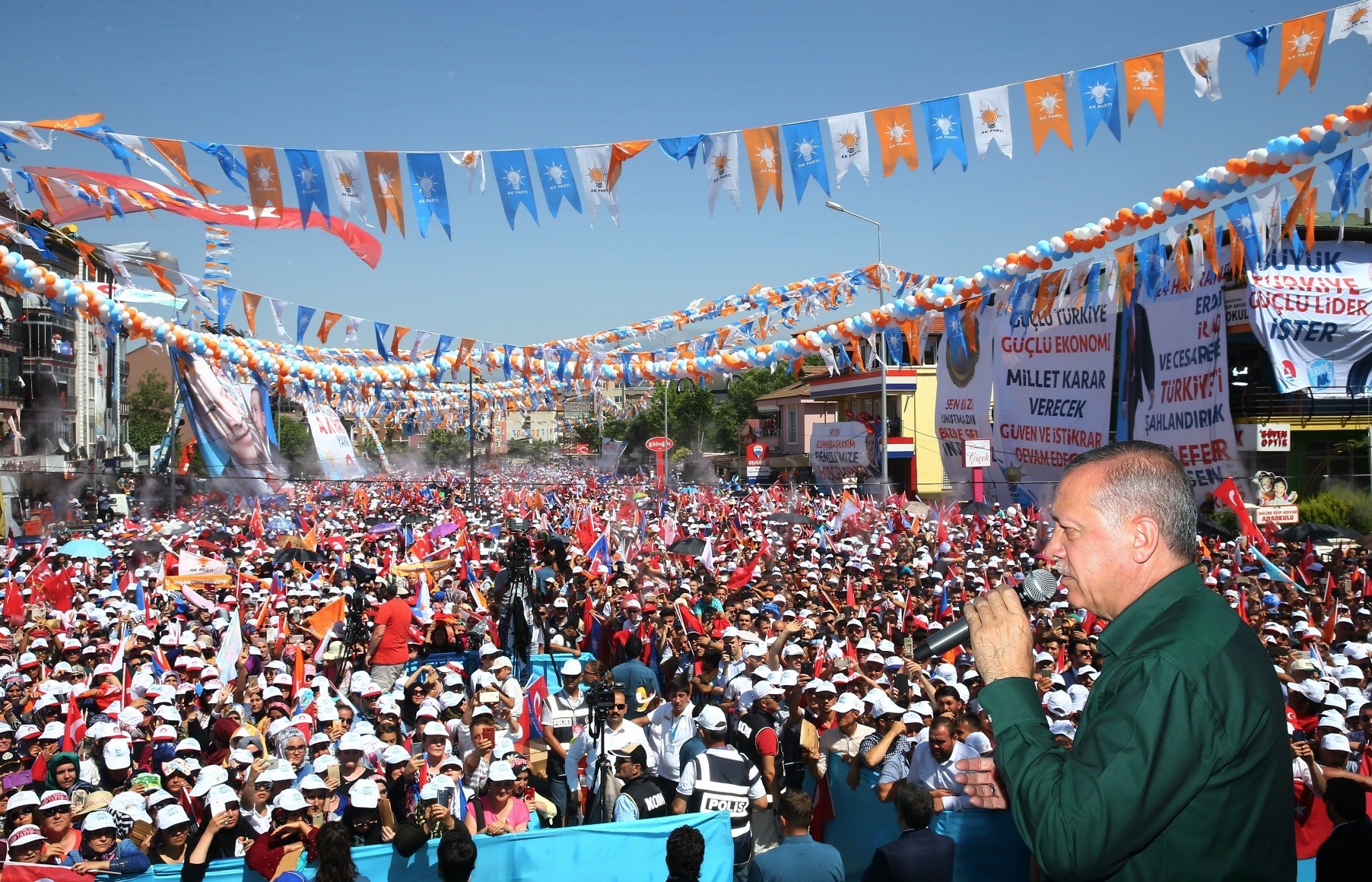 AK Party governments in the past 16 years have been acclaimed for the substantial megaprojects that would carry Turkey's development and economy to the next level , Erdoğan says

During the past 16 years, Justice and Development Party (AK Party) governments have been builders of projects and investments that would set up a positive future and development for the country, President Recep Tayyip Erdoğan said yesterday in an election rally in the western Denizli province. "In the past 16 years, the AK Party has brought only and only service to the people," the president said. He added that Turkey was not being pushed into political chaos and coalition governments, and said, "no compromises were made in investments and projects."

The CHP candidate İnce and other CHP officials have vowed to cancel some giant investment projects in the country, if they come out as winners on June 24. CHP Vice Chair Gülizar Biçer Karaca said recently the party would cancel the Akkuyu and Sinop nuclear power plant projects within the framework of international liabilities for environmental purposes if the party takes power. Turkey has had hopes of building nuclear power plants since 1955 but could not do so until 2010 when an agreement for the first nuclear power plant was signed with Russia.

İnce previously said he sees Turkey's indigenous car project as a waste of time and will not continue the project. He also stressed that if elected, he will not embark on the Kanal Istanbul project, which aims to create a safe alternative waterway linking the Black Sea to the Marmara Sea and the Mediterranean Sea. The estimated cost of the project is TL 65 billion ($15 billion).

Turkey will hold snap parliamentary and presidential elections on June 24, with six candidates running for president. In the past elections since 2002, AK Party has been able to form a single-party majority government, with the exception of the June 2015 elections. In the political history of Turkey, governments had not lasted for more than a year-and-a-half, causing political instability in the country.

The incumbent president also criticized the CHP's presidential hopeful, saying he does not understand the projects the AK Party proposes, referring to the major city park projects and "reading-houses" [library-like places where you can read books, knows as Kıraathane in Turkish], which citizens would be able to use 24/7 and would offer free beverages and snacks.

İnce had said these places would be used by the unemployed, and instead he vowed to open factories.

Erdoğan also asked if İnce would resign from his party if he did not win in the presidential elections.

The president played a clip of İnce slamming Kılıçdaroğlu for not resigning from the party chairmanship after repeatedly losing in elections.

"Well Mr. Muharrem, will you resign if you don't come out as the winner?" Erdoğan asked.

İnce, who is a CHP lawmaker from northwestern Yalova province, previously voiced criticism over the party policies pursued by Kılıçdaroğlu and ran twice for chairmanship against him. However, he failed to win both times.

President Erdoğan said İnce was proposed as a candidate by the party as a means to get rid of his intraparty rivalry.

As İnce is a presidential candidate, he is not able to run to be a lawmaker, which ultimately means he will be out of Parliament.

Erdoğan also criticized the CHP candidate for not having a tangible policy in the election declaration when it comes to fighting terrorism.

"Have you heard of anything on the fight against terror from Mr. Muharrem or Mr. Kılıçdaroğlu [CHP Chairman Kemal Kılıçdaroğlu]?" Erdoğan asked, and continued by criticizing İnce for visiting pro-PKK Peoples' Democratic Party's (HDP) imprisoned former co-Chair Selahattin Demirtaş.

Erdoğan has accused Demirtaş of inciting the October 2014 events in Diyarbakır, which resulted in the deaths of more than 50 people. In October 2014, Demirtaş made a call for people to take to the streets to protest the government's policy on Syria's Kobane. The call instigated riots by armed gangs who supported the PKK. They terrorized the streets and killed 53 locals, who they saw as opponents to their ideology.

Pundits have also criticized the CHP for not having substantial counterterrorism policies in the party's election declaration, during a time when Turkey has been fighting several terrorist groups, including the PKK and the Gülenist Terror Group (FETÖ), simultaneously.