CHP’s İnce, if elected, will work with war criminal Assad 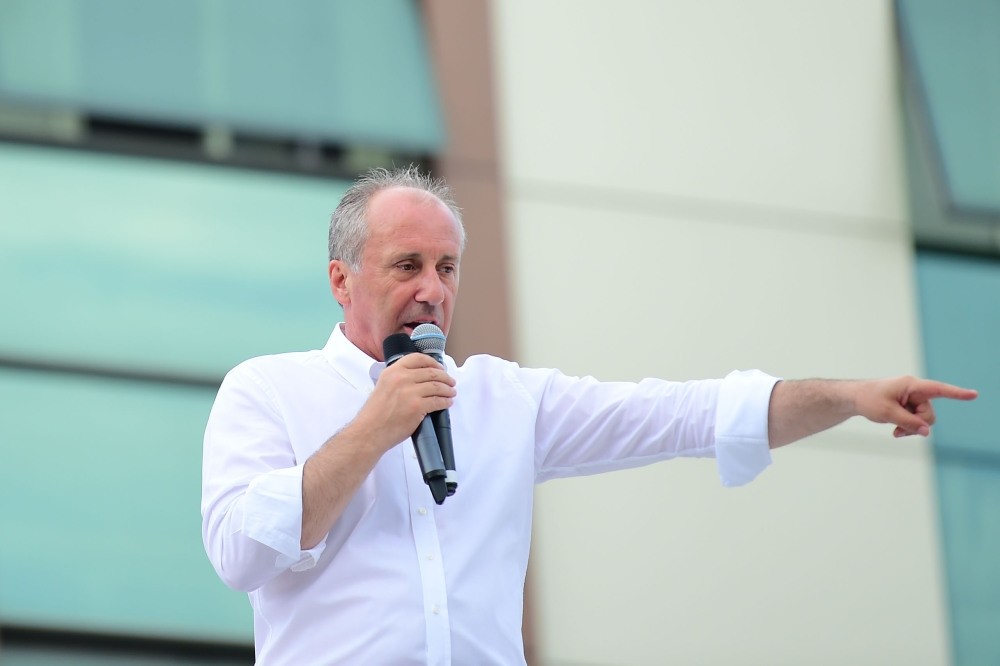 Kemal Kılıçdaroğlu, the leader of the main opposition CHP, signaled for closer relations with the countries in the region, including the Assad regime, if their candidate Muharrem İnce becomes president. He also blamed Washington and Moscow for the upheaval in the Middle East

Main opposition Republican People's Party (CHP) leader Kemal Kılıçdaroğlu said that their presidential candidate Muharrem İnce will visit Middle Eastern countries, including Syria's Bashar Assad regime, to bring peace to the region if he wins the elections on June 24. Speaking at a meeting of the Union of Chambers of Merchants and Craftsmen in eastern Malatya province, Kılıçdaroğlu said that they are determinant to establish a "Middle East Peace and Cooperation Organization" with Turkey, Iraq, Syria and Iran, adding that this is only way to stop bloodshed in the region.

After civil war erupted in Syria in 2011, the Assad regime has not been considered a legal representative of the Syrian people by many countries including the U.S., U.K, EU and several regional powers. They have frequently reiterated that Assad has no place in Syria's future and called for a transition period that leads to a democratic election to form a new government in the war-torn country. Assad is blamed for the death of hundreds of thousands of Syrians since the beginning of the civil war.

The CHP previously expressed necessity of talks with Assad several times. In February, in his address at the CHP's parliamentary group meeting, Kılıçdaroğlu called on the government to establish contact with the Assad regime to resolve the conflict in Syria.

Also, while announcing the 230-page election declaration in May, Kılıçdaroğlu said, "After stability is ensured in Syria and non-state actors are disarmed, we will support a political solution where the Syrian people will be able to make decisions on their own."

While the CHP calls for establishing contact and talks with Assad, the government has been against it, saying that Assad needs to be removed and replaced by a democratically elected government.

In response to Kılıçdaroğlu's call over the issue, President Recep Tayyip Erdoğan said in February that Turkey will not contact or sit at the table with Assad.

"What will we talk about with a murderer who has killed one million of his citizens," the president said.

During his speech in Malatya, Kılıçdaroğlu also blamed the U.S. and Russia for inciting violence in the Middle East by providing weapons to warring sides.

In February, Kılıçdaroğlu called the government to get rid of "the yoke of the U.S. and Russia," saying that the two powers were the main source of weapons in Syria and urged the government to pursue dialogue with its neighbors instead of imperial powers.

The CHP's presidential candidate also embraced an anti-U.S. rhetoric in his election campaign. In May, İnce vowed to shut down the U.S.' Incirlik Air Base by Christmas unless the U.S. extradites the leader of the Gülenist Terror Group (FETÖ), Fetullah Gülen, who is accused by Ankara of perpetrating the July 15, 2016 coup attempt.

"If you [the United States] don't hand him back, we will shut down Incirlik and send back U.S. soldiers on Dec. 24 and they can celebrate Christmas with their families," İnce said.

The Syrian civil war erupted in 2011 when the Assad regime harshly responded to protesters who had poured into the streets to demand more rights and freedom. The protests initially emerged following the Arab Spring demonstrations that resulted in strongmen in Egypt, Tunisia and Libya stepping down.

The cruelty against protesters triggered a rebellion in significant parts of the country, turning into a brutal civil war before long. So far an estimated 500,000 people have been killed in the war. Around six million people have been displaced internally and another five million were driven abroad as refugees.

With the backing of Russia and Iran, the Assad regime recently recovered swathes of territories and now controls the majority of Syria. Yet, regime forces still have tracts of land that remain outside of their authority at the borders with Iraq, Jordan and Turkey, three of its five neighboring countries.