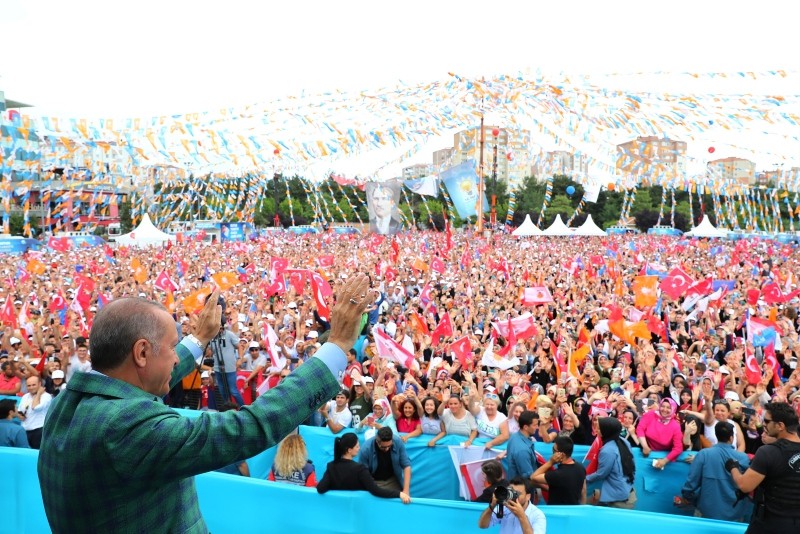 On Friday, Erdoğan's program began at noon in the Asian side of the city. After rallies in Kartal, Maltepe, Ataşehir and Üsküdar districts, Erdoğan crossed to the European side and held major gatherings in Sarıyer, Gaziosmanpaşa and Beyoğlu districts.

The president had a tighter schedule on Saturday as election bans were to start at 6:00 p.m. local time. His tour began in the western Esenyurt district on the European side at noon and continued in the neighboring Beylikdüzü district, which are home to some 850,000 and 315,000 people, respectively. He then held rallies in Avcılar and Küçükçekmece districts, finishing his marathon in Eyüp district shortly before the election bans started.

In each rally, which last shorter than his usual rallies due to tight schedule, Erdoğan was greeted by tens of thousands of people.

Istanbul, where Erdoğan served as mayor between 1994 and 1998 and rose to nationwide prominence, is home to to one-sixth of Turkey's population and one-fifth of the voters.

Voters will be able to cast their ballots after they show their ID cards or any other official identification document. It is forbidden to enter the voting booth with cameras and mobile phones.

Eight political parties are participating in the parliamentary elections that include the Justice and Development Party (AK Party) and the Nationalist Movement Party (MHP), forming the People's Alliance; the Republican People's Party (CHP), the Good Party (IP), and the Saadet Party (SP), forming the Nation Alliance; and the Peoples' Democratic Party (HDP), the Free Cause (Hüda-Par) Party, and the Patriotic Party (VP).