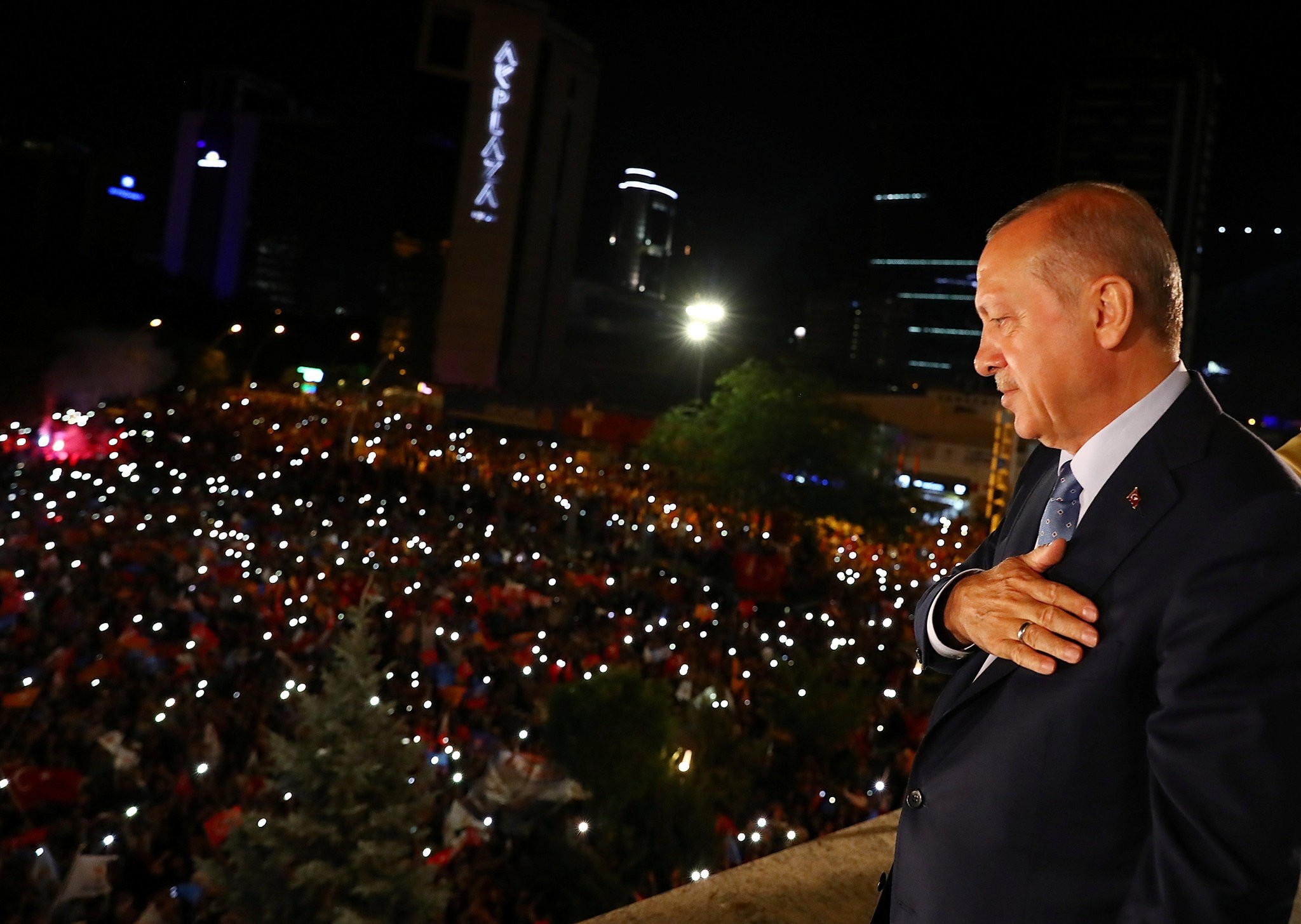 Russian President Putin called Erdoğan on Monday to congratulate him on his election victory. The two leaders discussed strengthening bilateral ties, particularly regarding cooperation over Syria.

Earlier Monday, Putin said the result of the vote pointed to the Turkish leader's "great political authority" and mass support, according to a statement by the Kremlin.

Putin "stressed that the results of the vote fully speak of Erdoğan's great political authority (and) mass support of the course conducted under his leadership to solve Turkey's pressing social and economic tasks (and) strengthen the country's position on the international arena," the Kremlin said.

The European Union said Monday it hopes Turkey will remain committed partner on major issues of common interest such as migration, security, regional stability and the fight against terrorism.

Azerbaijani President Aliyev was the first head of state to call his Turkish counterpart late Sunday after the results.

In a phone call, Aliyev said Turkey has grown under Erdoğan's leadership, adding that Turkey's economy has scored great successes and Ankara has cemented its position internationally.

During the conversation, the leaders also expressed their belief in the progress of the brotherly relations between Turkey and Azerbaijan in all areas.

The statement also said Aliyev invited Erdoğan to an official visit to Azerbaijan, an offer which the Turkish president accepted.

Meanwhile Palestinian President Mahmoud Abbas said "I wish Turkey more success, progress, and stability," congratulating Erdoğan "the success of the Turkish democratic process and his victory in the presidential elections."

Erdoğan, according to the agency, stressed Turkey's "continued support" for the Palestinian people and "their just cause and their right to freedom and stability."

Hungarian Prime Minister Victor Orban became the first EU leader to call Erdoğan to congratulate him on his election success.

"Serbia places great importance on its true friendship with Turkey and is committed to fostering good, solid relations. We will continue to be a reliable partner to Turkey and its leadership, which is ready to protect and defend values and principles in more challenging times," Vucic said in a written statement.

"You have made a new victory on the road to the progress and prosperity of Turkey and the great Turkish nation, and I am confident that your determination will remain a trademark of your leadership in facing future challenges," Vucic said in a telephone conversation with Erdoğan, according to the statement.

Pakistani President Mamnoon Hussain "extended heartfelt felicitations to President Recep Tayyip Erdoğan of Turkey on his victory in the elections".

Hussain underscored that the large turnout and the peaceful conduct of the parliamentary and presidential elections was a testimony to the strength and vibrancy of Turkey's democratic values and institutions.

"Congratulations to President @RT_Erdogan on his successful presidential election. The government & people of Somalia congratulate the people of Turkey on their historic presidential and parliamentary elections. Turkey a valuable partner of Somalia," he wrote.

"My sincere congratulations to President Erdoğan and the AK Party and to the Turkish people for their winning in the presidential and parliamentary elections," tweeted Ezzat al-Rishq, a senior leader of the Hamas movement.

Germany vowed on Monday to move forward in working constructively with the new government of Turkey, Chancellor Angela Merkel's spokesman said Monday, adding that they have taken note of the preliminary results, which showed that Erdoğan won an absolute majority in the presidential election.

"We are looking forward to continuing a constructive, beneficial working relationship between German and Turkish governments," Steffen Seibert said at a news conference in Berlin

He also noted that Merkel would congratulate Erdoğan at an appropriate time.

"This morning, the foreign minister told me this news, and I would like to congratulate Erdoğan on his re-election as Turkey's president," he told Anadolu Agency in Jakarta.

He hoped that bilateral ties between the two countries will improve, especially in the economic and investment sectors.

According to him, Indonesia and Turkey-as two countries with the largest Muslim population in the world-have many similarities.

He asked the Minister of Foreign Affairs Retno Marsudi to arrange a time, so he can personally congratulate Erdoğan in a phone call.

"I asked the foreign minister to arrange phone calls between us," he added.

With almost 97 percent of votes counted in Turkey's presidential elections, incumbent President Recep Tayyip Erdoğan is set to emerge as the winner with a 52.5 percent lead.