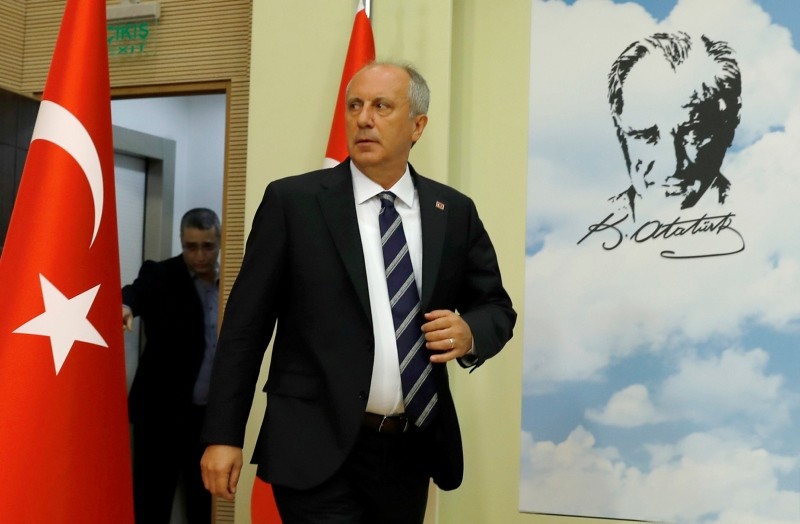 Addressing a press conference in Ankara, the CHP presidential candidate delivered a concession speech in the race against President Recep Tayyip Erdoğan in the early June 24 elections. "I accept the results of the election. If you are not able to congratulate your opponent in a race then do not enter that race. You can prepare again [for the next]. There is a gap of 10 million [votes]," Ince said.

On Sunday night, only a couple of hours into the vote count, CHP Spokesperson Bülent Tezcan and other party figures made statements in regards to the credibility of the vote counts. The party claimed that the elections would definitely be settled in the second round according to the vote tally in their hands.

However, at the end of the night, the CHP admitted that the vote tally they had perfectly matched that of the Supreme Election Council (YSK). That being said, some people still argued that Ince received threats and was even kidnaped so that he could not deliver a statement.

Brushing off such claims, Ince spoke out in fury. "Let me start with this fake news circulating on social media. These are the words of a couple schizophrenics. There are no such things. Let's end this," he said.

While accepting defeat against Erdoğan, Ince vowed to further pursue a career in politics as he praised himself with his 30.6 percent vote share. "Would the Ince who passed the 30 percent threshold after 41 years disappear from politics? Or would he continue?" he asked, referring to the CHP's failure in the last 41 years to get more than 30 percent of the vote in any election.

Now that Ince is no longer a deputy in the CHP, he said: "I will not discuss intra-party issues with you. Ask all you want I will not answer." Even though Ince has refrained from answering questions regarding his future in the CHP, it seems very likely that Ince will be running for the chairmanship position.

Later in the day, Ince also called President Erdoğan, his main rival in the elections, to congratulate him on his victory. The candidate of the Felicity Party (SP) and Ince's ally in the Nation Alliance Temel Karamollaoğlu also made a call to Erdoğan, wishing him success in his duty.

With nearly 100 percent of the ballots counted, Ince received 30.6 percent of the votes in the presidential election Sunday, while the CHP gained the support of only 22.6 percent of the voters in the parliamentary polls. In terms of number of votes, nearly 4 million more people voted for Ince than for CHP deputies — 15.3 million to 11.32 million. These figures also damage the security of CHP Chairman Kemal Kılıçdaroğlu's seat as party chairman.

Previously, Ince, who served in Parliament as a CHP deputy from 2002 to 2018, ran twice against Kılıçdaroğlu. At the party's 36th general congress in February, Kılıçdaroğlu, who has led the party since 2010, was the front-runner for party chairmanship in the congress. A total of 790 delegates voted for Kılıçdaroğlu, while the other candidate, Ince, received 447 votes.

Before the congress in February, in the 2014 congress, 740 delegates had voted for Kılıçdaroğlu, while Ince received the backing of 415 delegates.