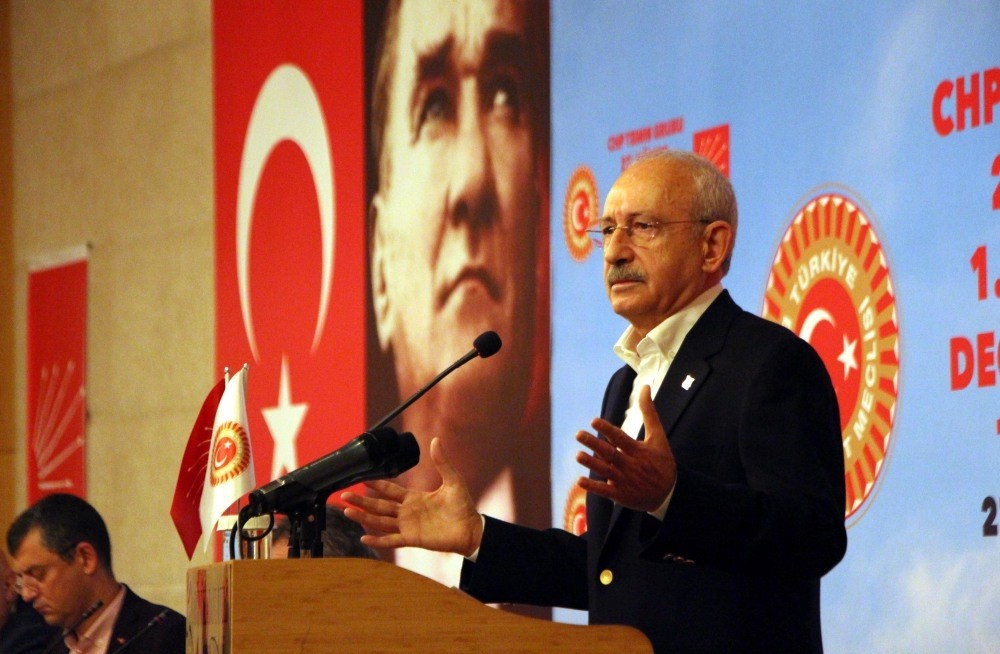 With the local elections next year, the CHP has decided to change its current ‘elitist' rhetoric in order to attract more center-right voters, who constitute the majority of the ruling AK Party's voter base

The main opposition Republican People's Party (CHP) has urged its grassroots to embrace a rhetoric that would to connect better with center-right voters, who constitute the majority of the ruling Justice and Development Party's (AK Party) voter base, to attract their support in the upcoming local elections scheduled for March 2019. According to an article published in Hürriyet daily yesterday, the CHP leadership prepared a report and presented it to its deputies during their workshop camp in Abant, in western Turkey's Bolu, last week. The report suggested that the party would refrain from what it termed as "intellectual, academic and elitist rhetoric" and urged its members to "speak with the mouths of the center-right majority," to appeal to mainstream voters.

"It is not possible to win elections without cutting down AK Party votes. Therefore, all decisions should be presented with arguments that carry a potential to cause a decrease in AK Party votes. Our aim is to surpass 30 percent in the next elections," read the report titled "Strategies of 2019 Local Elections-Methods, Goals, Priorities and Suggestions."

The CHP has been criticized by pundits for being elitist as well as embracing a pedantic rhetoric and thus failing to appeal to regular voters. The party has been traditionally successful in high-income districts and provinces and its sporadic strongholds but has failed to earn majorities in the suburbs and central, eastern and southern provinces. The party frequently nominates candidates from right-wing grassroots to gain broader support, a move that is often criticized by the CHP's original voter base, causing dilemmas for the party's administration.

One example of this strategy, Ekmeleddin İhsanoğlu, who had previously served as the head of the Organisation of Islamic Cooperation (OIC), was nominated as the presidential candidate by an alliance spearheaded by the CHP in the 2014 presidential elections against President Recep Tayyip Erdoğan. İhsanoğlu lost the election to Erdoğan and has continued his political life in the right-wing Nationalist Movement Party (MHP). Before the June 24 presidential elections, İhsanoğlu announced that he would vote for Erdoğan, which caused an uproar among CHP voters and officials, who had criticized İhsanoğlu's candidacy in 2014.

The report also drew attention to the significance of possible alliances in the local elections, particularly pointing to the conservative Felicity Party (SP). "The alliance with the SP did not bear fruit in the percentage of the party's vote; however, it changed the CHP's image in the eyes of conservative voters," the report said.

The CHP formed the Nation Alliance with the SP, the far-right Good Party (İP) and the center-right Democratic Party (DP) for the June 24 elections. The alliance received 33.9 percent of the vote, suffering a defeat against the AK Party and MHP's People's Alliance, which received 53.7 percent.

strongholds criticize leadershipMeanwhile, another CHP mayor announced yesterday that he will not run again in the March 2019 local elections, criticizing the party administration. Altınok Öz, the mayor of Istanbul's Kartal district, located in the province's Anatolian side, said that he does not intend to run again in the upcoming local elections and criticized CHP Chairman Kemal Kılıçdaroğlu's selection of candidates for the deputy post.

"Our chairman has a habit: If you put a box of tomatoes in front of him, he will always find the rotten one and make him party deputy chairman," he said in an event for the Atatürkist Thought Association (ADD).

CHP stronghold western İzmir province's Metropolitan Municipality Mayor Aziz Kocaoğlu also announced on Monday that he will not run for another term in the local elections scheduled for 2019 while voicing veiled criticism of the Kılıçdaroğlu administration amid an ongoing leadership debate spurred on by the general elections in June.The gap between the votes for the party's presidential candidate, Muharrem İnce, and the CHP in the June 24 elections sparked debates within the party as some party members and supporters called on Kılıçdaroğlu, whom they see as responsible for the repeated election failures, to step down. İnce lost the presidential election but was 8 percentage points ahead of the party itself in the parliamentary polls.

Internal CHP opposition groups collected signatures but failed to reach the quorum for an extraordinary congress.