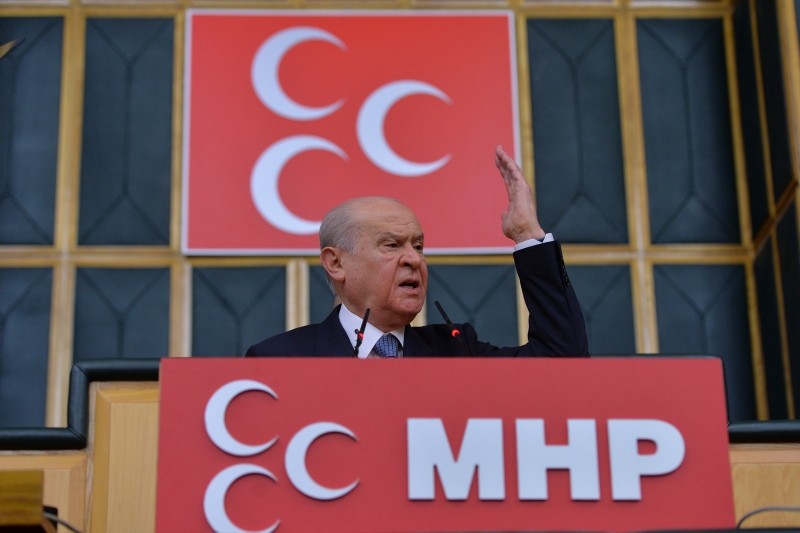 There will be no alliance between the ruling Justice and Development Party (AK Party) and the Nationalist Movement Party (MHP) in the upcoming local elections, the leaders of the two parties announced Tuesday, although the People's Alliance that was initially formed for the June 24 elections will still continue in Parliament.

MHP Chairman Devlet Bahçeli said Tuesday that the party no longer seeks an alliance with the Justice and Development Party AK Party in the upcoming local elections following a heated debate between the two parties over a proposed amnesty bill and a high court decision on the "Student Oath" practice in elementary schools.

"We no longer have the expectation, search or intent for an alliance for the March 31, 2019, local elections as a party at this stage. It won't be possible to reach anywhere with forced meetings," Bahçeli told the MHP's parliamentary group in Ankara, referring to meetings conducted between AK Party and MHP officials over a possible alliance in the upcoming municipal elections.

There's no need to linger, cheat the public, test patience and play with hopes," Bahçeli added. However, Bahçeli later clarified his words by saying that the People's Alliance still exists, but there will be no alliance in the local elections.

The MHP will participate in the elections in every electoral district of Turkey with its own candidates, Bahçeli added, saying that this decision is based on meetings with deputies, Central Executive Board (MYK) members and provincial chairpersons.

The lira was badly hit by Bahçeli's comments, losing some three percent in value before partially recovering after President Recep Tayyip Erdoğan's address before the AK Party parliamentary group.

"We see that MHP made a different choice for itself, we respect that. The only thing that we can say is since they say they will go their own way in the local elections, we say that everyone should go their own way," he said.

However, Erdoğan added that they see the People's Alliance as the one of the most remarkable gains of the last few years and would like to make it last.

"We have never done anything to harm the alliance," Erdoğan said, adding that the cooperation with the MHP has benefited both parties a great deal.

Erdoğan also expressed that in the current presidential system, making alliances does not necessarily mean agreeing on everything. "The AK Party and MHP are different parties," Erdoğan said, implying that they can have their own differences on certain topics. He counted the amnesty bill, the Student Oath debate and early retirement proposals as the contentious issues between the two parties.

The two parties joined forces in the "People's Alliance" for the June 24 presidential and parliamentary elections, pushing forward an election system reform that paved the way for electoral alliances beforehand. While the MHP urged its voters to support Erdoğan on the presidential ballot, the two parties put forward separate candidates for the parliament. The MHP also backed the switch to the presidential system proposed by Erdoğan and the AK Party, which was accepted in a referendum on April 16, 2017, with 51.4 percent of the votes.

The MHP leader's announcement came after Bahçeli, MHP officials and AK Party officials were involved in a bitter debate on MHP's amnesty proposal. In a bill submitted to the parliament last month, the MHP proposed a one-off conditional five-year sentence reduction for certain types of crimes committed before May 19, 2018. Erdoğan and the AK Party repeatedly rejected the idea while no opposition party backed the move. The main opposition Republican People's Party (CHP) criticized the scope of the bill and said MHP's move was politically motivated and aimed to release several organized crime figures associated with the party.

"The state has no right to grant amnesty toward the crimes against individuals," Erdoğan said Sunday in a conference related to the issue.

"Will we (be) notoriously referred (to) as a government that forgave drug-related crimes?" he said.

Bahçeli responded to Erdoğan's remarks on his Twitter account on Monday, saying: "(The bill) is currently awaiting consideration at the Justice Commission. If the deputies of the Justice and Development Party do not approve our proposal, then they won't accept it; but if they do, they will give their approval. The issue is this simple."

On Tuesday, Bahçeli said reducing MHP's proposal to drug users was unjust, and the MHP did not make this proposal just to open room in prisons.

Erdoğan, on the other hand, said the AK Party does not support the amnesty bill because it would go against the public's conscience. "I believe [Bahçeli's] statements on social media are the results of a misunderstanding," Erdoğan said, adding that although they would defend their policies till the end, they would never disrespect Turkey's citizens.

The two parties are also at odds in the "Student Oath" debate, which was recently reignited by Friday's decision of the Council of State, the highest administrative court in Turkey, annulling the Ministry of Education's directive canceling the oath from being recited in schools.

The oath, introduced during the single-party era in 1933, is a nationalist-themed text that was recited by students in elementary and secondary schools every morning, followed by a flag-raising ceremony and recitation of the national anthem. The practice, criticized by many for being militaristic and authoritarian, was discontinued in 2013. However, the issue also received criticism from nationalists and left-leaning neo-nationalists as a step eroding the Turkish identity and the reforms of the republic's founder, Mustafa Kemal Atatürk.