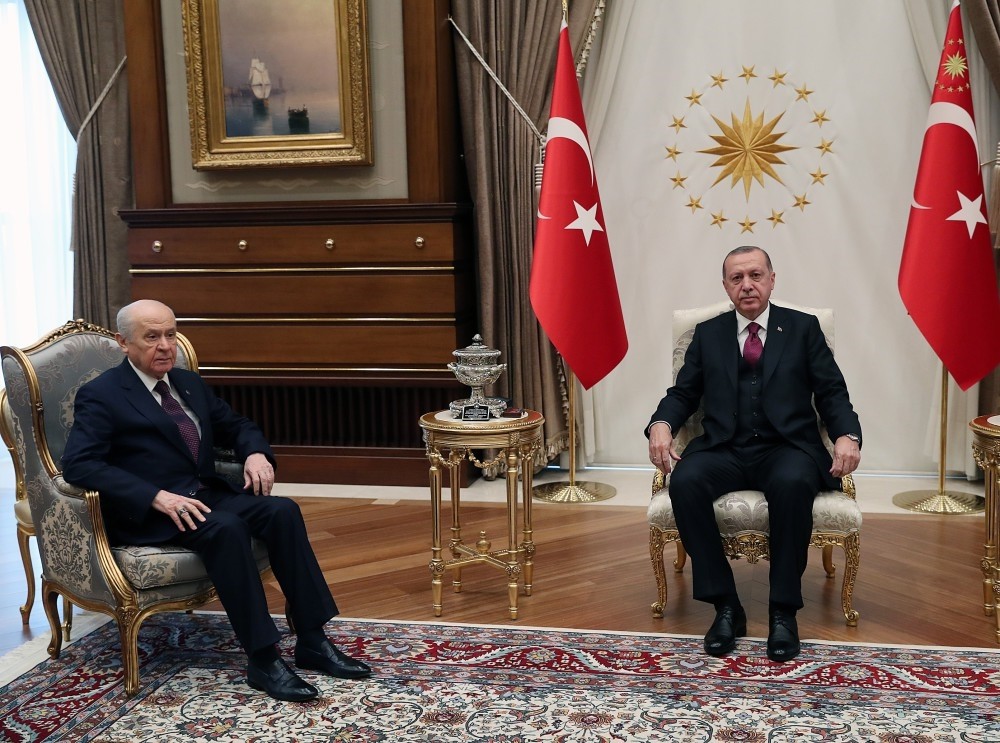 President Recep Tayyip Erdoğan, who is the ruling Justice and Development Party's (AK Party) chairman, and Nationalist Movement Party (MHP) Chairman Devlet Bahçeli met yesterday to discuss a possible alliance in the upcoming local elections. The two leaders met in the early afternoon at the presidential residence in the capital Ankara. The meeting lasted for 55 minutes. Yet, neither side made any statements following the meeting. However, on Tuesday, Erdoğan said that the local elections would top the agenda of the meeting, stressing that this is the expectation of the voter bases of the two parties.

Both leaders have repeatedly and strongly voiced their support for continuing the People's Alliance in Parliament that was formed for the June 24 elections but announced that they will not seek a full alliance in the local elections.

Previously, Bahçeli announced that the MHP will participate in the local elections in every electoral district with its own candidates. He said that this decision was based on meetings with deputies, Central Executive Board (MYK) members and provincial chairpersons.

The two parties joined forces in the form of the People's Alliance for the June 24 presidential and parliamentary elections, pushing forward an election system reform that paved the way for electoral alliances beforehand.

Since the initial forming of the alliance, both Erdoğan and Bahçeli have been stressing that the People's Alliance was not simply formed to win elections and that its spirit must be protected in the face of threats posed against Turkey's national security.

Speaking on the issue, AK Party Deputy Chairman Numan Kurtuılmuş said yesterday that that there is still lots of time for the election process to start but still the technical opportunities of a possible alliance are the topic of discussion for both parties.

"It was easy to make alliance in the general elections. It is known that it is harder to come up with an alliance in local elections," Kurtulmuş said.

Regarding the party's preparations for the elections, Kurtulmuş said the party has already determined its candidates for most of the provinces, including Istanbul and Ankara.

President Erdoğan is expected to announce all the candidates' names on Nov.24.

However, for some provinces the candidates have already been reported to the media. For instance, in the southern province of Antalya, the incumbent mayor of the province Menderes Türel is expected to be the candidate of AK Party, as party's provincial head announced on Tuesday.

The results of an intraparty tendency survey for the elections were submitted to President Erdoğan after AK Party delegates completed voting Sunday.

Meanwhile, a senior lawmaker of Turkey's main opposition party said yesterday that they will announce their candidates for the local elections slated for March 2019 by the end of December.

"By the end of December, all candidates for the CHP mayorship will most probably be announced," he said.

The CHP and the right-wing Good Party (İP) are expected to continue their alliance in the upcoming March 2019 local elections by appealing directly to their voter bases.

"Talks with the İP are still continuing. Our aim in these talks is to take steps in every area in Turkey to make the country breathe a sigh of relief," Veli Ağbaba, the CHP's deputy chairman, said on Saturday in a press briefing.

CHP incumbent Chairman Kemal Kılıçdaroğlu and İP Chairwoman Meral Akşener met last week, while delegations of the two parties also held a technical meeting on Friday, hinting at the continuation of the Nation Alliance, the bloc that was formed for the June 24 parliamentary and presidential elections.