MHP: People's Alliance must receive more than 52 percent in local polls for sake of democracy 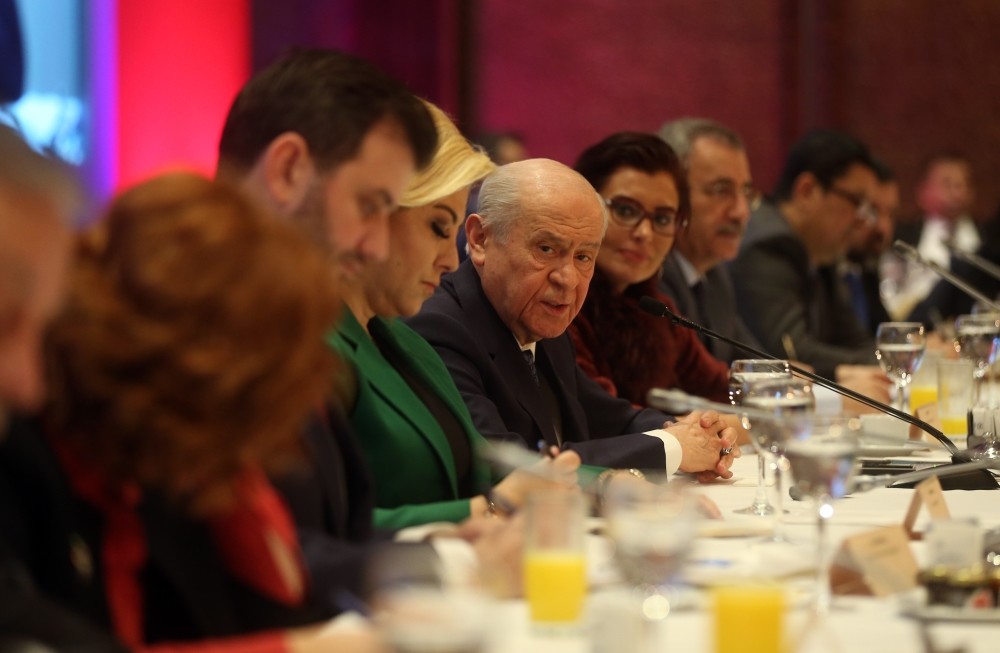 The victory of People's Alliance in the upcoming municipal elections would be beneficial for democracy in Turkey, MHP leader Devlet Bahçeli said yesterday

Opposition Nationalist Movement Party (MHP) Chairman Devlet Bahçeli said yesterday that the People's Alliance formed with the ruling Justice and Development Party (AK Party) should garner more than 52 percent of the votes in the upcoming local elections to continue steps in the democratization process.

"The People's Alliance should not be below 52 percent," Bahçeli told a meeting with reporters in Ankara where he explained his party's strategy in local polls and responded to questions of representatives from various media outlets.

"Then we would have taken a step toward democratization and normalization in Turkey as well as stability in permanency in the presidential governing system," he added.

Stressing that the People's Alliance have been continuing on a strong basis, Bahçeli said that in 30 metropolitan areas the two parties have reached an understanding in principle. He underlined that efforts are continuing in districts and are should be completed in a few days.

Bahçeli said that in the municipalities of Adana, Mersin and Manisa, the MHP would nominate candidates. Considering the People's Alliance, the AK Party will not nominate a candidate in southern Osmaniye province "despite its stronger position," which is the MHP leader's hometown, Bahçeli added.

Winning the election, the MHP's candidate in Osmaniye, Kadir Kara, received 47.34 percent of the votes in the 2014 local elections. The MHP chairman previously announced that his party would not nominate candidates in Ankara, Istanbul and İzmir provinces and instead support candidates of the AK Party.

Former Environment and Urban Planning Minister Mehmet Özhaseki, who now serves as deputy from central Kayseri province and is the AK Party vice chairman in charge of local administrations, was nominated for the capital Ankara.

The AK Party's candidate for western Izmir province, a stronghold of the Republican People's Party (CHP), is former Economy Minister and Denizli Deputy Nihat Zeybekci, who held the ministry post from December 2013 to November 2015 and from May 2016 to July 2018.

While the name of Parliament Speaker Binali Yıldırım should be announced for Istanbul mayor, the AK Party has yet to announce its candidate for the province. President and AK Party Chairman Recep Tayyip Erdoğan said on Tuesday the candidate for İstanbul might be announced on Dec. 29.

In relation to resent debates about the possible candidacy of Yıldırım, Bahçeli said that Yıldırım does not need to resign now if he is nominated as a candidate since debates over the new Parliament speaker would cast a shadow on his candidacy.