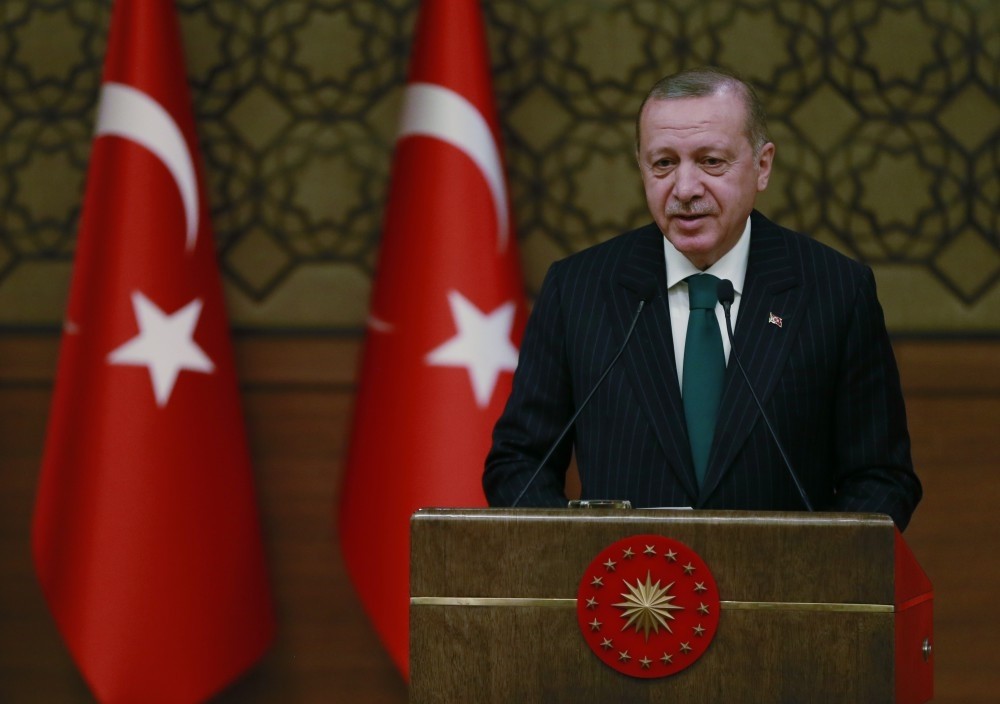 President Recep Tayyip Erdou011fan delivers a speech during a symposium on local authorities under the new presidential government system at the Beu015ftepe Presidential Complex in Ankara, yesterday.
by Daily Sabah Jan 10, 2019 12:00 am

The rulIng Justice and Development Party (AK Party) continues to take measures to integrate green policies into the election campaign with President Recep Tayyip Erdoğan announcing yesterday that for the campaigns for the March 31 local polls, the party will use string bags made from natural materials instead of plastic ones.

"The land cannot dissolve this [plastic] for 500 to 750 years and up to 1,000 years. Thus, we have initiated a war against these kinds of plastic materials," said Erdoğan, speaking at a symposium on local authorities under the new presidential system.

"I've told my friends to use string bags, cloth bags in our election campaign. From now on, we [as the AK Party] will never us plastic bags, our work on this matter continues," Erdoğan said.

An era ended in Turkey on Jan. 1 when the government banned free plastic bags in stores and it seems it will take some t

ime for the Turkish public to get used to this. Looking to avoid paying the mandatory TL 0.25 ($0.05) for one bag, shoppers have either opted to carrying the purchased goods with their bare hands or get creative, like a man who was recorded tucking the goods he bought from a store in his rolled-up coat.

Talking about the benefits of using bags with natural materials, Erdoğan pointed to the fact that they can be reused as long as they are cleaned properly, preventing waste at a remarkable level. "These [natural materials] are the friends of our soils," the president emphasized.

Stating that hemp was the main material of the natural bags, Erdoğan said that due to previous incorrect agricultural policies in the country; hemp could no longer be produced in Turkey and had to be imported from abroad.

"However, now, hopefully our agricultural ministry can initiate new work on this matter and we will take the necessary steps to reproduce it," Erdoğan said.

A United Nations report says an estimated 5 trillion plastic bags are used worldwide every year, and they mainly contribute to maritime pollution as some 8 million tons of plastic, including bags, are dumped into the ocean every year, killing marine life and entering the human food chain. Ac

cording to the Turkish Ministry of Environment, there has been a 70 percent reduction in the use of plastic bags on the first day of the ban on free bags.

Previously in December, the president initiated green policies for the party. He underlined that in order to prevent visual pollution that occur during campaigns, the party will only be allowed to display flags at programs and election coordination centers. AK Party election buses will not tour, except for on specific times set beforehand. He underscored that social media and other mediums will take the place of traditional campaigning methods.

Speaking of the zero-waste project, which was firstly initiated by first lady Emine Erdoğan, the president said that the local municipalities should be very insistent and determined over the project.

The campaign that aims to boost recycling, helped Turkey shed its former image of a country turning a blind eye to the problem of pollution.

The campaign has received nationwide support as it raised public awareness on proper sorting of waste and use of waste as compost in agriculture.

In recent years, Turkey has started to prioritize waste management, over concerns of rising environmental damage, with municipalities responsible for garbage collection upgrading their waste management systems. The country also managed to recycle more than half of the plastic bottles in the market in 2017. According to official figures, out of the 236,000 tons of plastic bottles sold in 2017, 140,000 tons were recycled. In the first quarter this year, 17,500 tons of plastic bottles were recycled to be used again.

Horizontal agriculture to be

Regarding irregular urbanization in the country, Erdoğan said that he has been insisting on promoting horizontal architecture for quite some time.

"We cannot say what's done is done. There are people who are trying to turn seas, forests into bricks through vertical architecture. They do not care about nature," he said, underlining that if they have to destroy a building to protect nature, they'll do without considering whose building it is.

"City means civilization. Some would regard civilization as if it is only consisting of physical structures a

nd cultural climate. However, the essence of civilization is belief and morality," the president said.

Since it came to power in 2002, the AK Party has been known for its green policies aimed at increasing environmental sensitivity. According to an AK Party report that explains the activities and performance of the government in the past decade, between 1992 and 2002, the government oversaw afforestation work on some 743,000 hectares of land. This number increased six-fold between 2003 and 2017. During the last decade of the AK Party-led government, 4.9 million hectares were used for forestation. The same report revealed that some 1.5 million hectares of new forests were also planted in Turkey.