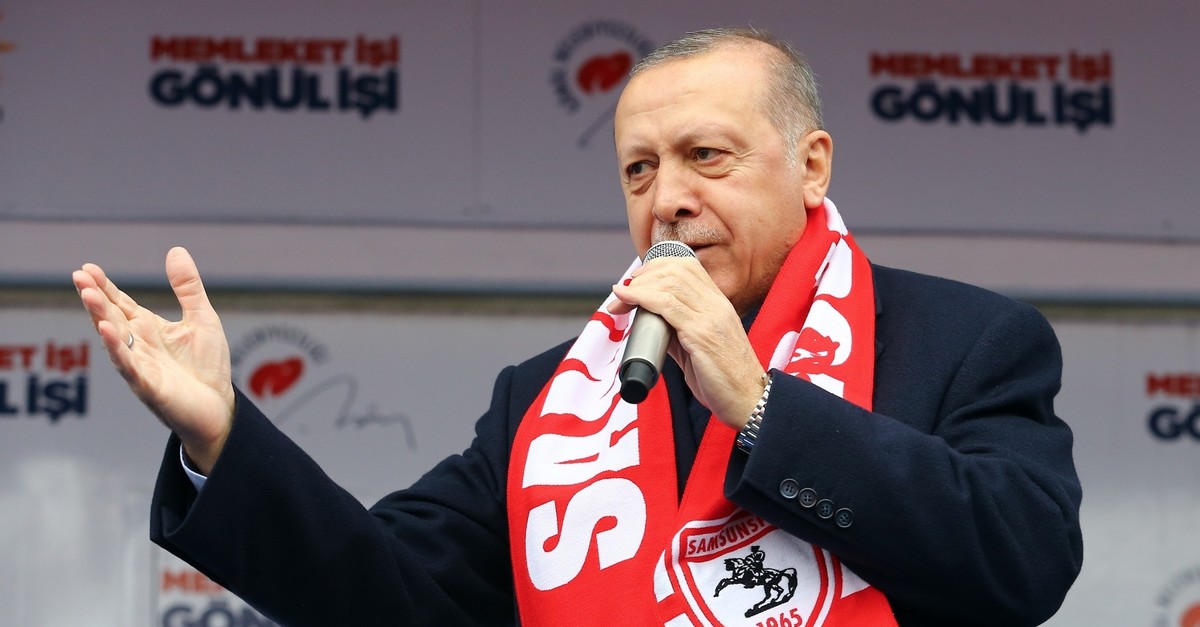 As part of his busy election campaign schedule, President Recep Tayyip Erdoğan, the ruling Justice and Development Party's (AK Party) chairman, addressed thousands of followers yesterday in northern Ordu province, where he accused the opposition alliance of receiving support from terrorist groups. "As in every election, those leaning their backs on terrorist groups and some shadowy forces are awaiting impatiently for the election results. If they get the results that they are wishing for, they will fall on our country like a nightmare," Erdoğan said. Of course, he was referring to the alleged cooperation of the Nation Alliance, formed by the main opposition Republican People's Party (CHP) and the opposition far-right Good Party (İP), and the pro-PKK Peoples' Democratic Party (HDP) for the upcoming March 31 municipal elections.

Speaking about CHP Chairman Kemal Kılıçdaroğlu and the PKK terrorist group, whose headquarters are located in the Qandil mountains in northern Iraq, Erdoğan said, "Mr. Kemal, you are siding with Qandil. You are hand-in-hand [with the terrorists] and your arms are linked together with the support of Qandil."

During his election campaign rallies, Erdoğan has been frequently criticizing the Nation Alliance of having an informal alliance with the HDP, and also at times accusing the alliance of receiving support from the followers of the Gülenist Terror Group (FETÖ).

During his rally in Ordu, Erdoğan once again showed clips of HDP officials' openly supporting the PKK terrorist group, an instrument he has resorted to show the links between the HDP and the terrorist group.

The president pointed to an HDP official's remarks about supporting their own party's candidates in "Kurdistan," during a joint event with CHP's mayoral candidate in Istanbul's Şişli district. "Is there a region in Turkey called Kurdistan?" Erdoğan asked, "No, there is not."

"If you really want a Kurdistan, there is one in northern Iraq, good bye to you. There is no such region in Turkey," the president said and added that "the people will teach the best lesson" to them on March 31.

The HDP announced previously that it would not nominate mayoral candidates in seven major municipalities, including Istanbul, İzmir and Ankara. The decision raised questions about a possible secret alliance between the CHP and the HDP; both parties have denied such claims.

The government has long accused the HDP of close links with the PKK. The HDP is known for its support of autonomy in regions where large Kurdish populations live. Some of its members have also been charged or accused of having links to the PKK terrorist organization. Its former co-leader, Selahattin Demirtaş, was arrested in November 2016 over terrorist propaganda. Many of its members have often voiced overt support for the PKK.

Ahead of the June 24 presidential and parliamentary elections last year, the AK Party and the Nationalist Movement Party (MHP) formed the People's Alliance, which is continuing for the March 31 elections. The alliance received a majority in Parliament, while their presidential candidate, Erdoğan, also won the election with 52.6 percent of the vote.

So far, Erdoğan and MHP Chairman Devlet Bahçeli have carried out separate election campaigns, with the president holding more than two dozen of rallies across the country.

The AK Party's mayoral candidate for the western CHP-stronghold İzmir province, Nihat Zeybekci, said yesterday that the two leaders will hold a joint rally on March 17 in İzmir province.

The road to March 31 has not been smooth for the Nation Alliance's main actors so far. The ideological distance between the CHP and İP, the disagreements over candidates within the parties have caused resignations and turmoil in both parties of the alliance.

With only 26 days left until the municipal elections, in İzmir's Buca district, CHP's Youth Branch head Can İrat and the board of directors resigned from their posts in response to the party caucus which did not submit Suat Nezir's name as the district mayoral candidate.

Issuing a press statement, the youth branch stated that Nezir was victimized on the last day, leading to dissatisfaction of the people of Buca and the members of the CHP's youth branch.

With the amendment of the decision, the party continues to get serious reactions while Nezir's dignity and reputation was destroyed, the youth branch added. "What is being done is political snatching. Who will guarantee that this operation against Suat Nezir will not happen to us in the future? We have no lesson to take from those who do not make a sound against those who corrupt politics. However, they must learn from the dynamic spirit and clean politics of youth," the statement read.

In İzmir, the party's second row candidate for the municipal council list in Seferihisar district, Akın İldeniz withdrew his candidacy. According to local sources, Yelda Celiloğlu, who was nominated as an election candidate in Seferihisar, yet later waived her candidacy, was brought in to fill the vacancy after the resignation of İldeniz.

Despite major controversy and discomfort among the party's members, CHP Chairman Kemal Kılıçdaroğlu expressed support in mid-February for the current candidate lists for the upcoming local elections.

Although he had claimed to re-evaluate the candidate lists to ease the tension within the party, Kılıçdaroğlu backed the list by stating that he would not let anyone "touch" the candidates and that there would be no change in the lists.

Another resignation, on the other hand, came as the CHP's Tunceli provincial head Yılmaz Çelik resigned from his post. In a written statement, Çelik noted that he decided to submit his resignation due to the endless intraparty brawls.

Previously, due to the growing mistrust in the CHP over disputable nominations in certain provinces and districts continuing protests and in-house conflicts occurred. Protesters wearing bright red vests decided to march from Istanbul to Turkey's capital Ankara on Jan. 8 in a bid to protest the party administration's reckless stance toward the reaction of CHP's Istanbul Maltepe District Organization over the announcement of Ali Kılıç as the candidate for Istanbul's Maltepe Municipality.

Also, before the due date for candidate list submission to Turkey's Supreme Election Board (YSK), 12 party assembly members of the CHP called for an extraordinary meeting to reevaluate mayoral candidates; however, the request was not accepted on the grounds that the chief clerk was not present.

Despite growing discomfort in the party, the CHP started its rally program last week, including visits to 20 provinces. Kılıçdaroğlu opened his party's Ankara's Elmadağ Election Coordination Center yesterday and held a public demonstration.