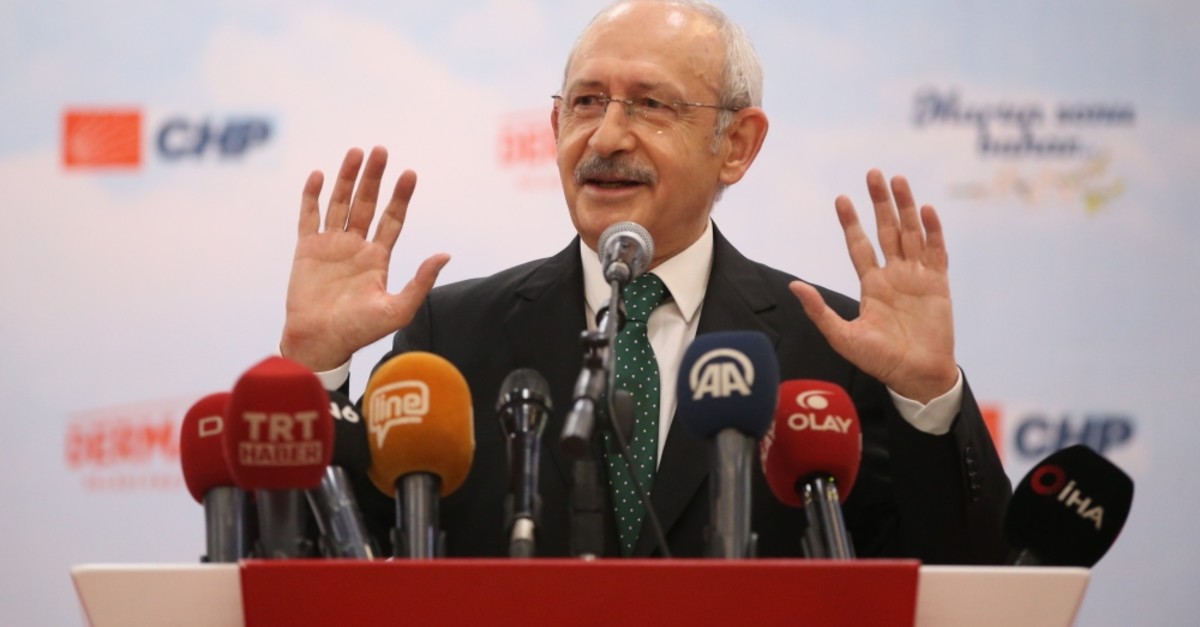 CHP leader Kemal Kılıçdaroğlu, who has lost every election he has participated in so far, says his main intraparty rival, Muharrem İnce, was not nominated as Istanbul's mayoral candidate because he does not have a ‘success story'

The chairman of the main opposition Republican People's Party (CHP) Kemal Kılıçdaroğlu, who has lost more than 10 elections so far since he became the party's leader, avoided self-criticism once again and looked for others to put the blame on for future failures. "As I previously stated, the Istanbul mayoral candidate should have a success story. There is no success story behind Muharrem İnce but Ekrem İmamoğlu has one," Kılıçdaroğlu said on Monday on a TV program when he was asked about why İnce was not nominated as a mayoral candidate despite İnce's desire to run.

Ekrem İmamoğlu is the CHP's candidate for Istanbul metropolitan municipality.

Muharrem İnce, the last presidential candidate of the party and the leading dissident figure within the party, had been voicing his intention to run for mayor for Istanbul with the condition that he is nominated through a primary election. Yet, Kılıçdaroğlu was hesitant to nominate İnce, reportedly fearing that if İnce wins in Istanbul, he may rerun for the party chairmanship position and force him to step down.

Kılıçdaroğlu previously tried to silence İnce by not including his name in candidate surveys for Istanbul mayor despite overwhelming demand from the party organization. Instead, he insisted on Istanbul's Beylikdüzü mayor, İmamoğlu, who is regarded as an unpopular figure compared to İnce. Despite losing the presidential elections against President Recep Tayyip Erdoğan, İnce was 8 percentage points ahead of his party's votes in the parliamentary elections.

The gap between the votes for İnce and the CHP sparked debates within the party as some party members and supporters called on Kılıçdaroğlu, whom they see as responsible for repeated election failures, to step down.

The party administration and Kılıçdaroğlu were also criticized for nominating figures closer to their line at the expense of popular and experienced candidates with independent stances or ties to the intraparty opposition. This, along with concessions to the far-right Good Party (İP) for their cooperation and its secret cooperation with the pro-PKK Peoples' Democratic Party (HDP), led to numerous protests of party organizations and mass resignations on a local scale, while many prominent party members also left their positions.

Most recently, Suat Yüksel, the CHP's mayoral candidate in southeastern Turkey's Hakkari province, resigned on Monday from his party and his post for candidacy to join the ranks of the ruling Justice and Development Party (AK Party).

Yüksel stated he decided to resign due to his discomfort over CHP's cooperation with the HDP, adding that he came to the conclusion that the only party that could ensure peace and welfare for the nation was the AK Party.

Meanwhile, Belgin Koç, the head of the HDP provincial party organization in Muğla, announced the party organization's withdrawal from Muğla province along with their district candidates "for the purposes of strategy."

The CHP has refrained from officially including the HDP, which has been condemned for its close ties with the PKK, in its electoral alliance with the İP amid fears of a possible backlash from its secular-nationalist voter base.

The HDP is known for its support of autonomy in regions where large Kurdish populations live. Also, some of its members have been charged for or accused of having links to the terrorist organization PKK that has been fighting the Turkish state for more than 30 years and left more than 40,000 dead. Its former co-leader, Selahattin Demirtaş, was arrested in November 2016 over terrorist propaganda.