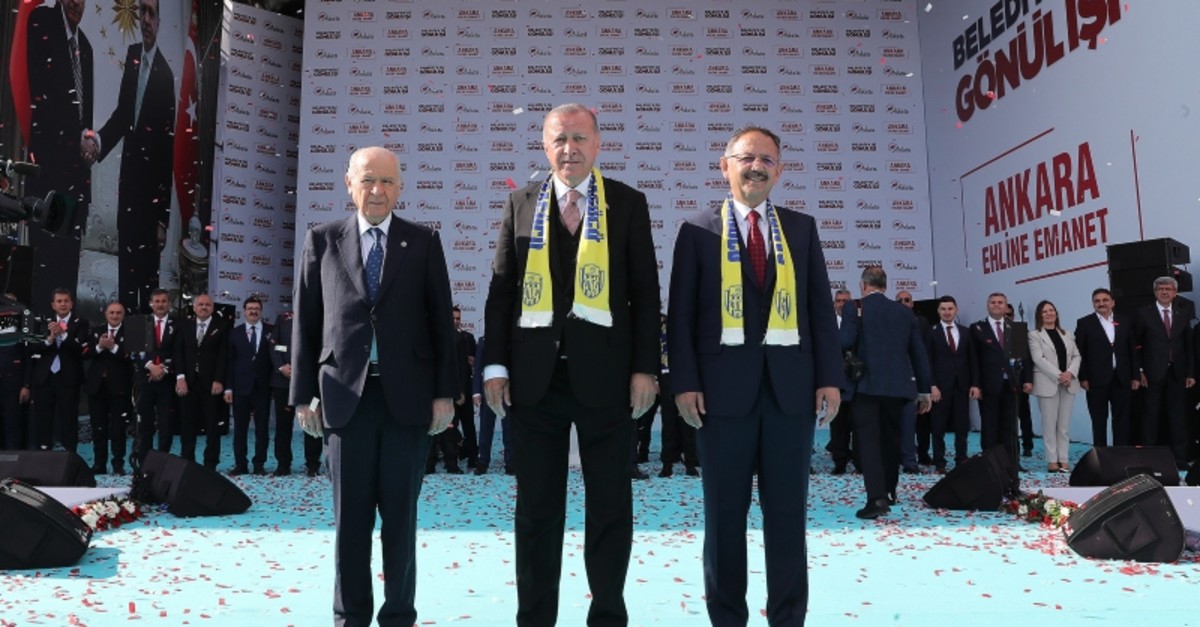 Nearly half a million people attended Saturday the second joint rally of the People's Alliance formed by the ruling Justice and Development Party (AK Party) and the Nationalist Movement Party (MHP) in Ankara as President Recep Tayyip Erdoğan and MHP Chairman Devlet Bahçeli reiterated their unity and assertiveness in the capital for the March 31 local elections.

"The attendance figures and the cheers of the crowd show that Ankara is ready for the elections," Erdoğan said, asking all People's Alliance supporters to strive to convince all voters in the eight days ahead of the elections. He said that neither the AK Party nor MHP or People's Alliance supporters should lead to a loss of votes and should encourage others to go to the polls.

Erdoğan also reiterated his criticism for the Nation Alliance formed by the main opposition center-left Republican People's Party (CHP) and right-wing Good Party (IP) over what is described as a veiled alliance with the pro-PKK Peoples' Democratic Party (HDP). The president also criticized CHP candidate Mansur Yavaş over allegations of forgery.

In his speech, Erdoğan underlined that Özhaseki, former environment and urban planning minister who now serves as a deputy from central Kayseri province where he held the Kayseri metropolitan mayor's office for more than 20 years, is unlike his main opponent Yavaş. He noted that Özhaseki has a vision and has countless numbers of projects to take the capital to the next level.

Meanwhile, MHP Chairman Bahçeli highlighted that people who vote for the People's Alliance will not only vote to elect a mayor but will also support and strengthen the presidential system of governance.

"We will transfer into a country where stability is entrenched with minimum political tension and with consolidated societal peace and normalization," Bahçeli said.

Also speaking at the rally, candidate Ankara mayor candidate Özhaseki said that he has spent an extensive amount of time to prepare for the elections and has worked with a team of 30 to come up with unique projects for the capital. He said that they aim to reach the expectations of Ankara residents.

"We created 111 projects for the city and 5,000 others for districts, especially for remote ones," Özhaseki said.

The People's Alliance will hold its grand rally in Istanbul's Yenikapı Square on Sunday.