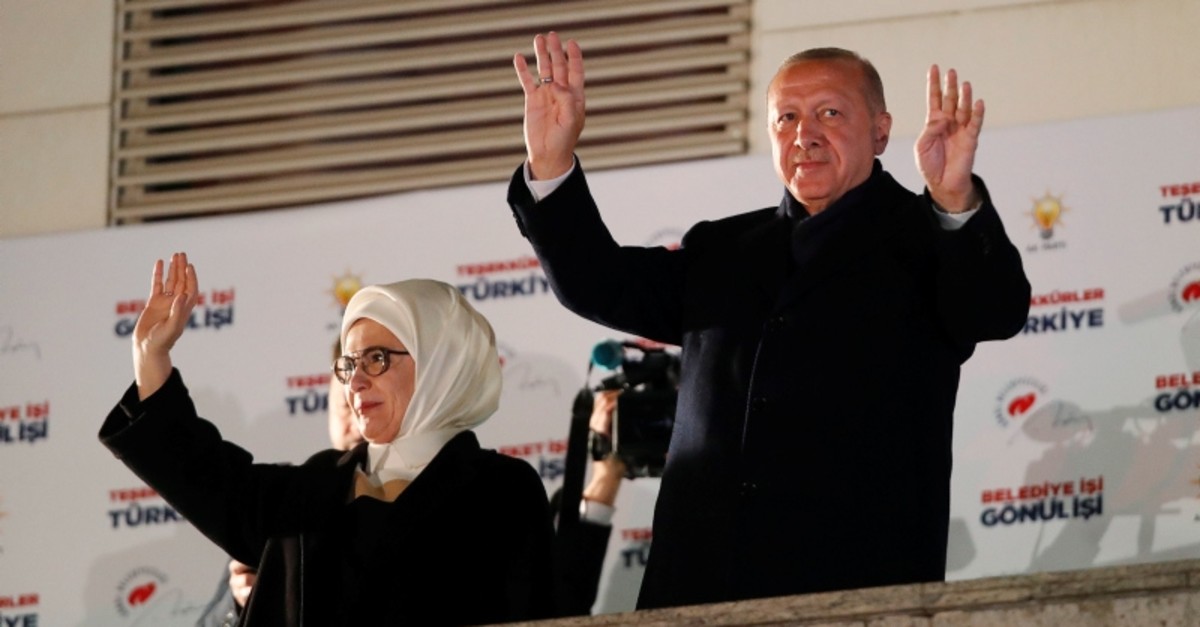 The momentum that the ruling Justice and Development Party (AK Party) has built since 2002 did not wane on Sunday, as the People's Alliance with the Nationalist Movement Party (MHP) declared victory in the local polls, taking 51.9 percent of the overall votes.

"The results show that we again turned out to be the leading party with major outpointing," President Recep Tayyip Erdoğan said after the election results were revealed.

"Preliminary results show that AK Party is the first party with a clear lead, and the People's Alliance we formed with MHP has won some 52 percent of the votes," Erdoğan added.

"We have won 778 municipalities in total, including 16 metropolitan municipalities, which means 56 percent of all municipalities in Turkey will be governed by the AK Party," Erdoğan said later Sunday night. He said together with the People's Alliance, they won 24 races for province centers, 538 district races and 200 township races.

Expressing his gratitude to the People's Alliance and his partner MHP leader Devlet Bahçeli, Erdoğan said that they will "continue to work for our country to make it a peaceful place."

"It's been a long, tiring journey but we still have lots of things to do," the president underlined.

At midnight on Sunday, with 91 percent of the ballotsvotes counted, the People's Alliance had received 51.74 percent of the votes nationwide, with the Nation Alliance garnering 37.64 percent.

Around 57 million people were eligible to participate in the municipal elections, in which voters were electing mayors, district mayors, city council members, mukhtars (neighborhood officials or village headmen), and members of elder councils. Voter turnout stood at 83.60 percent compared to 89 percent in the 2014 local elections.

Its rival, the Nation Alliance that was formed between the main opposition CHP and the Good Party (IP), received 37.57 percent of the overall vote.

"We had some wins, we had some loses," Erdoğan said during his speech, adding that every win and loss is part of democracy.

Two of the critical provinces where the AK Party lost were the capital Ankara and the third largest city Izmir. In Ankara, the Nation Alliance's candidate Mansur Yavaş received 50.35 percent of the votes to win against People's Alliance candidate Mehmet Özhaseki. Yavaş's victory ended the long-running AK Party rule in the capital.

Voters living in Turkey's larger cities voted to elect a mayor for the entire city, as well as district mayors, city council members, mukhtars, and members of elder councils. The voters chose from 12 political parties competing in the local elections.

Voting ended at 4 p.m. in Turkey's eastern regions, covering 32 provinces, while citizens living in the other regions of the country continued voting for another hour.

Mobile ballot boxes were brought to the homes of the sick and the elderly who were unable to get out and vote at designated polling stations.