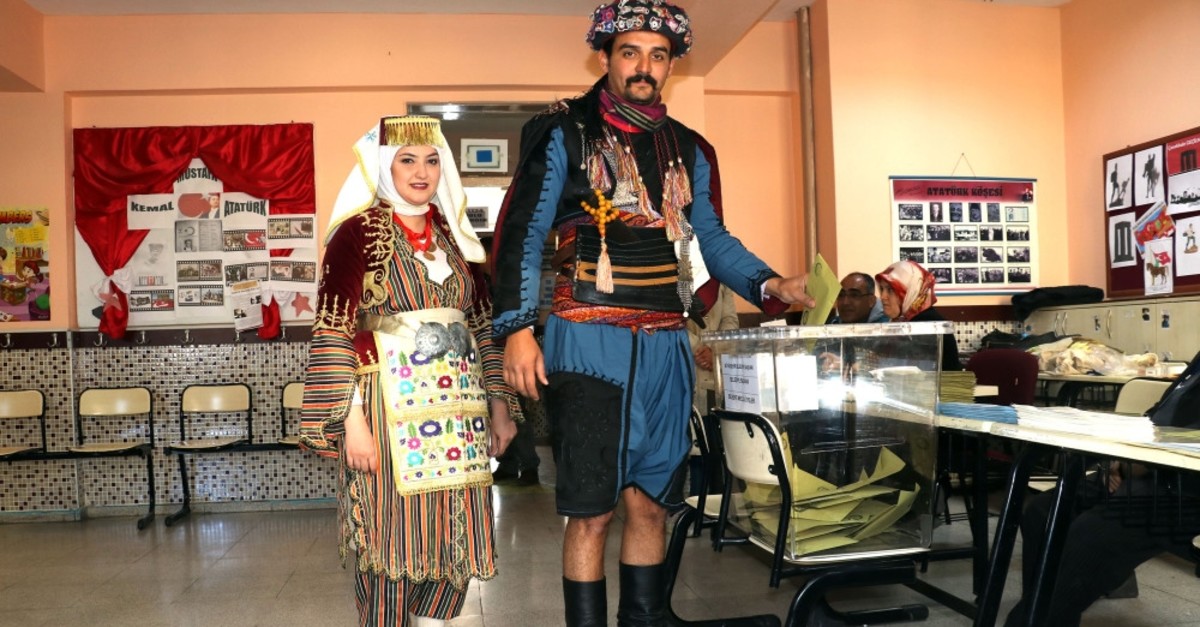 More than 57 million Turkish citizens cast their votes yesterday to elect their mayors, mukhtars and member of city councils. While there was an ordinary atmosphere for the most part, some interesting voters, who wanted to take this opportunity to give a message, gave rise to some of the most memorable moments of the day.

Numerous voters went to polls by wearing traditional outfits from head to toe to commemorate their ancestors and keep traditions and connections to the past alive. A voter in Nevşehir, İlhan Kılıçtaş voted in a traditional uniform of Ottoman janissary band. Kılıçtaş told Anadolu Agency (AA) that he wanted to remind people of their Turkish ancestors and raise awareness on the historical roots. A similar situation took place in eastern province Van's Erciş, where Kyrgyz Turks went to elect their mayors in traditional clothes. A couple living in Aydın, Fatma Şeyma and Ozan Ancın, preferred to cast their votes in "Efe" costumes used in the traditional dance of Zeibek, known as the soldiers from the Aegean Region of Anatolia. Ancın, who is also a folk dance trainer, underscored that he wanted to preserve the traditions.

Some chose to bring their pet and farm animals with them to join their excitement on the day of local elections. Mehmet Kılıç carried his two Macaw parrots named "Cafer" and "Alex" on his shoulder, letting one of his parrots to put the voting envelope into the ballot box.

A lot of people brought their cats and goats to draw attention to animal rights, while a voter entered the voting booth with his Siberian husky dog, a species known for its similarity to the wolf which is associated with the Nationalist Movement Party (MHP). İbrahim Ömür Belgin, a mukhtar candidate, who carried out his election campaign with the support of his horse "Cemşit" for four months, also voted with his horse. Election Day also showed the strong solidarity and unity within the Turkish society with various people helping those unable to go to polls due to their diseases or old age. Throughout Turkey, mobile ballot boxes were brought to the homes of the sick and the elderly, who are unable to get out and vote at the designated polling stations. Some 46 patients and people with disabilities cast their votes in Istanbul's Şişli thanks to the mobile ballot boxes. Polling stations were also set up at retirement homes, nursing and rehabilitation centers. A resident of a retirement home in Ankara, Güngör Başyeğit, 83, shared with media his joy of being able to vote.

In the provinces where the mobile ballot boxes were insufficient, patients were carried to the polling stations by paramedics via ambulances. In Ankara, Meryem Çınar, 80, cast her vote on her sickbed with the help of the health officials. In İzmir, people who requested transport from call centers were also transported to the polling stations by ambulances. Many citizens had to overcome difficulties in order to even go to polling stations. A disabled in Mersin had difficulty in going up the stairs, yet, the spirit of Election Day showed through again when other voters helped her by carrying the battery-powered wheelchair up the stairs. The world's tallest girl, Rumeysa Gelgi also cast her vote in a wheelchair. Despite her old age, 107-years old Şükriye Özbay preferred to cast her vote in the designated station. A veteran of the July 15, 2016, coup attempt, Mustafa Zorova also went to polls in Ankara's Kahramankazan. Even an earthquake did not discourage the enthusiastic voters in Denizli's Acıpayam. Turkish citizens cast their votes in a tent put up after the district was shaken yesterday by an earthquake with a magnitude of 4.9.