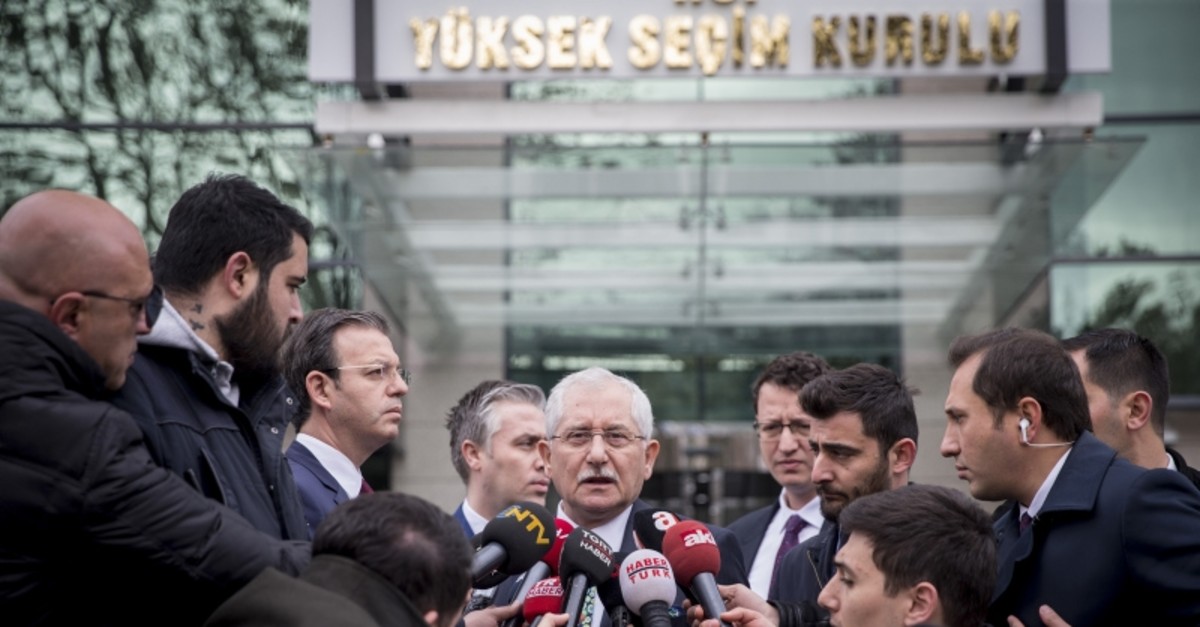 The appeal process continues for places in which complaints of voting irregularities were made during Turkey's March 31 local elections, but for races that did not receive objections, the winner will be announced, the Supreme Election Board (YSK) said Tuesday.

YSK Chairman Sadi Güven told reporters on Tuesday that the election had been completed and provisional results shared with the political parties.

"In places where there were no objections, the election mandate will be announced," Güven said.

Güven confirmed that the appeal process began on Monday, and reiterated that objections must be submitted to the district or provincial election boards by Tuesday at 3 p.m.

On Sunday, millions of Turkish voters cast their votes in the local elections to choose Turkey's mayors, city council members, mukhtars (neighborhood officials), and members of elder councils for the next five years.

The ruling Justice and Development Party (AK Party) has said it will object to invalid votes and irregularities in the capital Ankara and Istanbul, where main opposition Republican People's Party (CHP)'s candidates appear to hold a narrow margin over AK Party candidates.

In Ankara, CHP candidate Mansur Yavaş is leading the race with 50.9 percent of votes, according to unofficial results, with the AK Party's Mehmet Özhaseki trailing at 47.1 percent.

In Istanbul, the victory has come down to about 24,000 votes, as Nation Alliance candidate CHP's Ekrem Imamoğlu appears to lead the race for the Istanbul Metropolitan Municipality (IBB) against People's Alliance candidate the AK Party's Binali Yıldırım.

On Monday, AK Party Deputy Chairman Numan Kurtulmuş said: "There are nearly 300,000 invalid votes (in Istanbul). In some districts, the share is very high. Our organization is preparing objections. Both us and the CHP are following the (the process)."

In regard to Ankara, AK Party General Secretary Fatih Şahin said Monday, "We have identified invalid votes and irregularities in most of the 12,158 polling stations in Ankara."

According to the unofficial results, the main opposition CHP won mayoral races in Turkey's three largest cities — Ankara, Istanbul and Izmir — as well as in central Anatolian provinces of Bilecik, Bolu and Kırşehir, all previously held by the AK Party. The CHP also claimed victory over AK Party's People's Alliance partner the Nationalist Movement Party (MHP) in southern provinces of Adana and Mersin.