How the post-election period and appeal process works in Turkey 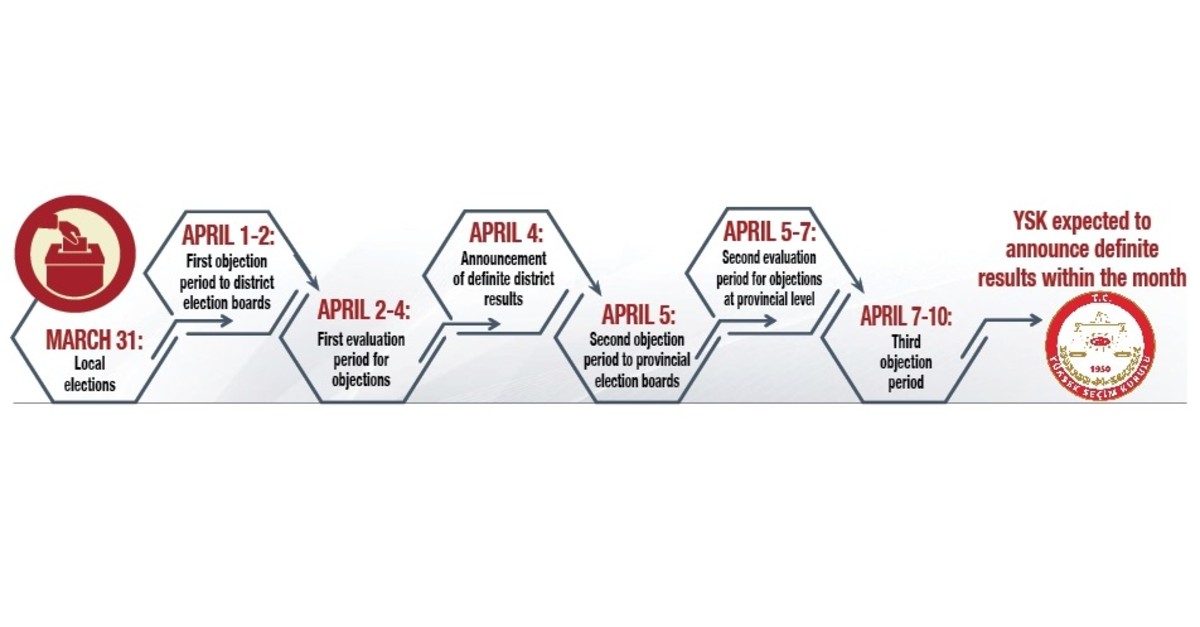 Although the unofficial results of the local elections have been circulating in the media, official data is yet to be announced at the end of this week after objections by the parties are evaluated, which may change the results in key cities – especially in Istanbul and Ankara. Sadi Güven, the head of the Supreme Election Council (YSK), told that the appeal process continues in places where complaints of voting irregularities were made during elections.

The first appeal period where parties can file their objections of the provisional results to the YSK's district election boards was from Monday to Tuesday. Following the evaluation of these objections, the district boards have two days to announce the definite district results by April 4. Provincial boards have one more day, until April 5, to announce the definite results after objections. The parties can again object to district board results and apply to the provincial election boards of the YSK which will have two days to evaluate the second objections. If the parties object for the third time, then the provincial election boards can come to the YSK within three days. The YSK is expected to announce definite results within the month.

"In places where there were no objections, the election mandate will be given," Güven added.

On Sunday, millions of Turkish voters cast their votes in the local elections to choose Turkey's mayors, city council members, mukhtars (neighborhood officials) and members of elder councils for the next five years.

According to the provisional results, the ruling Justice and Development Party (AK Party) won in over 575 out of 1,046 total municipalities in the country, continuing its trend of electoral victories by winning a majority of the votes once again. On the other hand, the main opposition Republican People's Party (CHP) won mayoral races in Turkey's three largest cities, Ankara, Istanbul, and İzmir, as well as in the central Anatolian provinces of Bilecik, Bolu and Kırşehir, all previously held by the AK Party. However, definite results can be announced only when irregularities in votes are corrected and objections from all parties evaluated by the YSK. The appeal process has always been a part of elections in Turkey, yet it has been never attracted attention to such a degree before due to its possibility of turning the tide in favor of the AK Party in Istanbul and Ankara.

Many officials from the AK Party have said they will object to invalid votes and irregularities in the capital Ankara and Istanbul, where the CHP's candidates appear to hold a narrow margin over AK Party candidates.

"There is a legitimate process and everybody needs to respect it. We will trace every vote in the ballots. Whichever result is announced, we will consider this as the decision of the people and respect it," Çelik said. Pointing out that the definite results will be revealed after the finalization of the appeal process, Çelik called for everyone to stake out their claims for their votes.

Accordingly, the AK Party declared yesterday that they will object the provisional election results in all the districts of Istanbul due to numerous irregularities in the votes cast as detected by the party organization in Istanbul.

AK Party Deputy Chairman Ali İhsan Yavuz stressed on Monday that the scrutineers wrote the results in the wrong sections on the counting-enumeration charts.

As of yesterday, the AK Party has officially challenged poll results in 39 districts of Istanbul. It has been decided that invalid votes in the districts of Beykoz, Çekmeköy and Fatih will be re-evaluated. Although the AK Party led in local elections in 24 out of 39 districts of Istanbul, for the Istanbul Metropolitan Municipality (IBB) the victory came down to about 24,000 votes, as the Nation Alliance's CHP candidate Ekrem İmamoğlu led the race against the People's Alliance candidate, the AK Party's Binali Yıldırım.

Invalid votes in key cities are also a much-debated matter in post-election day processes. In relation to the issue, Yavuz highlighted that most of the invalid votes in Istanbul were cast in districts where the AK Party had a strong voter base, which again raised questions on the matter. On Monday, AK Party Deputy Chairman Numan Kurtulmuş also said: "There are nearly 300,000 invalid votes (in Istanbul). In some districts, the share is very high. Our organization is preparing objections. Both us and the CHP are following the process."

Errors should be fixed to ensure national will

In Ankara, where CHP candidate Mansur Yavaş led the race with 50.9 percent of votes, according to unofficial results, with the AK Party's Mehmet Özhaseki trailing at 47.1 percent, may also see the appeal process. Highlighting that there are thousands of obvious errors in the counting of the votes, Özhaseki underscored that their only aim is to fix these errors to ensure national will rather than to change the national will or the results.

In regard to Ankara, AK Party General Secretary Fatih Şahin said Monday, "We have identified invalid votes and irregularities in most of the 12,158 polling stations in Ankara."

So far, the AK Party Ankara party organization has detected 108,680 invalid votes and almost the same amount of votes entered in the system wrongly after evaluating and comparing election reports, charts and the provisional results in the system. The party also indicates that invalid votes in the city increased considerably compared to other elections and the reason for the invalidity of these votes has not been disclosed to the public.