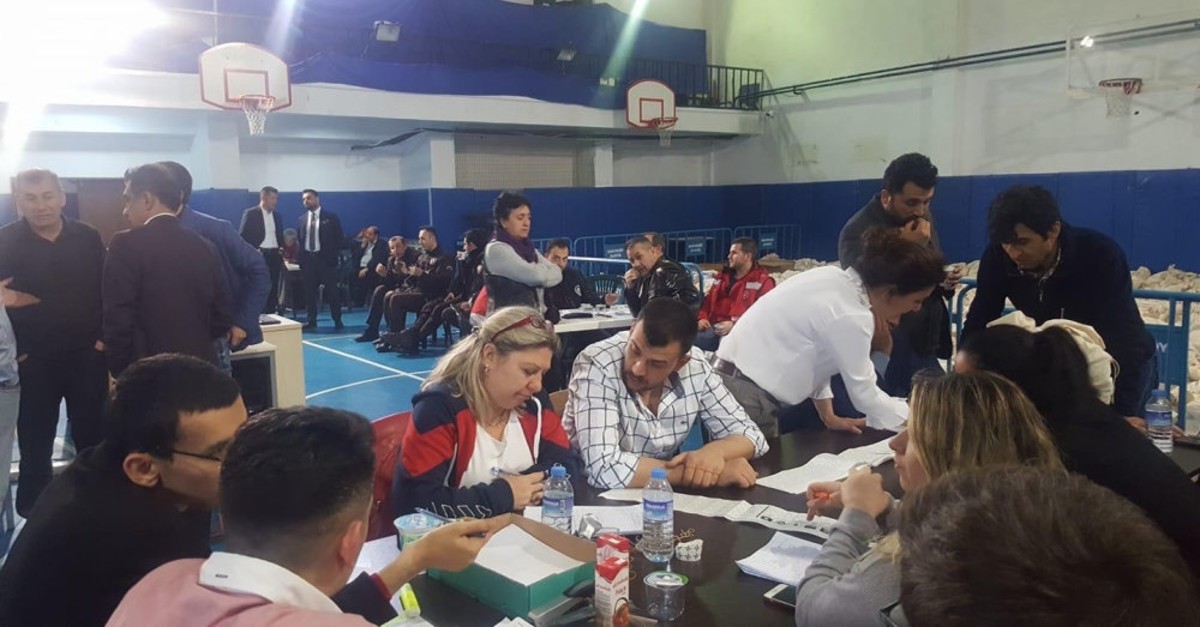 In this undated picture officials from the YSK and different political parties recount votes in the Istanbul Metropolitan Municipality elections, following objections of irregularities.
by daily sabah
Apr 27, 2019 12:03 am

The ruling Justice and Development Party (AK Party) has come up with a new idea to regulate the election process in the country by suggesting that all the elections – presidential, parliamentary and local – be held at once to be more convenient for the people and politicians. Due to the tense post-election period that troubled all political parties because of irregularities and objections that came up after, the AK Party decided to prepare a new regulation that will look into every step of the election process, from electorate lists to mandates.

A major change suggested as part of the prepared regulation is to have all the elections at once, which necessitates a change in the Constitution, Hürriyet Daily reported Friday.

If Parliament approves the change, the first elections in accordance with that are expected to be held in 2023, the 100th anniversary of the foundation of the Turkish Republic. This means that the next local elections, which are supposed to be held in 2024, will be handled a year earlier. The constitutional change is necessary to cut nine months from the duration of the work of the mayors, members of provincial committees and mukhtars.

Another idea is to have mukhtar elections on a separate day from local elections. If this idea fails, the AK Party plans to change the system of voting. In order to overcome the irregularities that emerged during the March 31 elections, it is planned to have four separate voting papers, four separate envelopes and four separate ballot boxes for the four separate elections.

AK Party authorities determined that during the re-evaluation of the votes in the post-March 31 period, many ballots lacked seals indicating the choices of the voters. Some AK Party voters, although voting on the balloting paper of the provincial committee members, forgot to vote for mayoral candidates and provincial municipalities. The party concluded that this was not deliberate but instead the electorate not understanding that indicating their choice once was not enough.

The ruling party also plans to come up with new measures for the process of forming balloting committees. Although the law requires all balloting committee members be public servants, it was found that there were some irregularities in the implementation of the rule. Therefore, punishments and responsibilities on the issue are expected to be re-regulated.

It is also planned to enable parties to object to balloting committees by having the lists of the committee members beforehand. In order to be able to come up with proper objections, all aspects related to the polls must be determined six months before the elections. Also, according to the new proposed regulations, the electorate will not be able to move their registers within this period. Following the local polls, the AK Party demanded that the Supreme Election Council (YSK) produce balloting committee lists from Istanbul to uncover suspicious members; however, the YSK rejected the party's demands and made the party examine the signatures on 31,280 reports one by one to produce a list of their own, which led the party to discover that 20,000 members were not civil servants and were illegally holding their positions as members. The AK Party is trying to avoid voter movement because of irregularities that emerged during the local elections, especially in Istanbul where more than 200,000 people made changes in their registers and moved to other provinces of the country before the local polls to vote for their relatives or acquaintances.

Following the changes, the AK Party determined that most of the voters who moved to other provinces were actually part of its voter base, which urged the party to restrict the alterations in electoral rolls. AK Party sources expressed that for a voter to change where he or she is registered only for the sake of voting for someone is not appropriate since that would mean they are not voting for the sake of the province where they actually receive services.

Millions of Turkish voters cast their votes nationwide on March 31 in local elections to choose mayors, city council members and other officials for the next five years. The AK Party submitted extraordinary objections to the YSK following the polls to cancel and redo the municipal election in Istanbul and demanded the YSK not give the mandate to any candidate until the entire appeal process was completed. The AK Party's extraordinary objection concerned four categories: Irregularities in the vote count sheets, serious discrepancies between the number of registered voters and the number of voting ballots, some balloting committee chairmen and members not being government employees as required by law and the participation of ineligible voters in the polls.