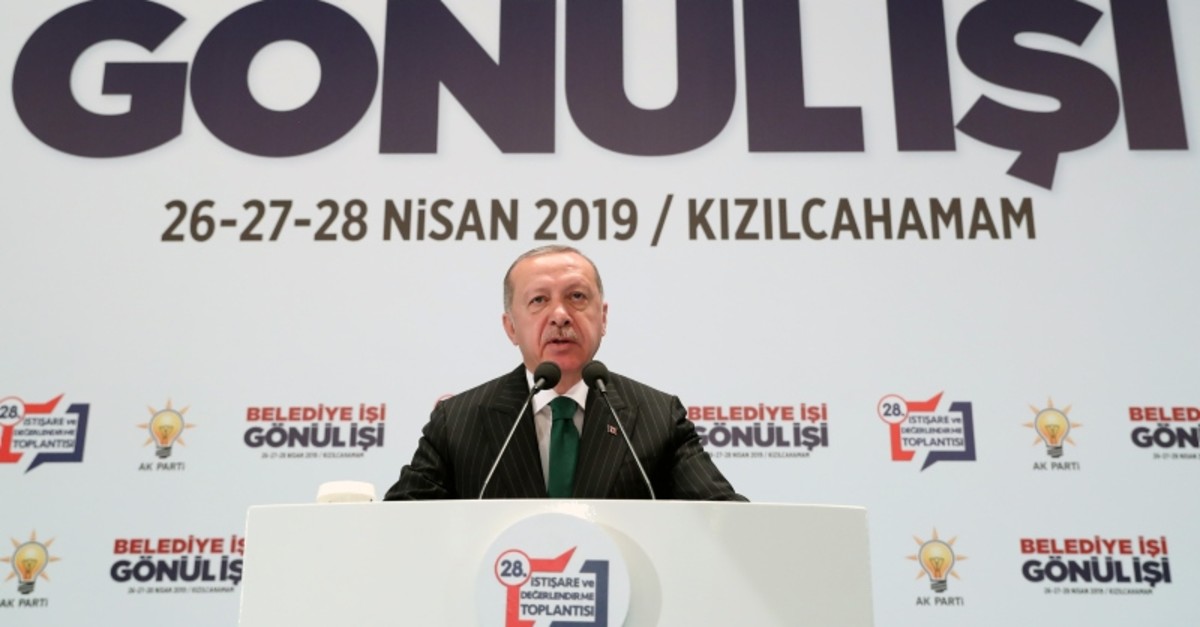 "Every election is an exam, a struggle and an opportunity for assessment. We substantially succeeded in the March 31 local elections," said Erdoğan during the inauguration speech of the ruling Justice and Development Party's (AK Party) 28th Assessment and Consultation Camp in the Kızılcahamam district of Ankara.

The president noted that the AK Party got 44.4% of the votes, which is the second highest rate of their party in terms of local elections to date, with the total share of votes of the People's Alliance with the Nationalist Movement Party (MHP) standing at 51.7%, in line with results of April 16, 2017, referendum and June 24, 2018 presidential elections. Erdoğan called the results of the elections an "undeniable success," extending his congratulations to MHP and its leader Devlet Bahçeli.

Erdoğan called the mayoral elections of Istanbul questionable, adding: "All doubts must be eliminated so that the people feel relieved."

Main opposition Republican People's Party's (CHP) Ekrem Imamoğlu swore in as the mayor of Istanbul earlier this month as he carried the race on March 31 in local elections amid AK Party's appeals to the Supreme Election Council (YSK) over voting irregularities. In the capital Ankara, CHP candidate Mansur Yavaş led the race. In both cities, the candidates running under the scope of partnership with the right-wing Good Party (IP) within the Nation Alliance, won in Antalya, Adana and Mersin municipalities.

Recalling the CHP's concerns over objections to Istanbul poll results, Erdoğan termed the situation "tragicomic" as the party has the right to challenge the results according to the electoral law.

Erdoğan referred to the documents which showed that there was a very serious organized set up in Istanbul polls. "The fact that we have saved nearly 15,000 votes through our struggle in Istanbul shows how right and suitable our appeals are. Think about it, [CHP] were saying that the gap [between Imamoğlu and AK Party candidate Binali Yıldırım] is at 30,000, but this has narrowed down to 13,000, and it will drop further," he said.

"Although we have won the districts, we will question why we lost the big cities," he added.

"We need to focus on what to do and how to evaluate this process, especially in the metropolitan cities," Erdoğan said.

The president also hinted at changes inside the party after the elections, warning party members and mayors to work hard.

"While we're fighting outside, I have to say, we had people doing us wrong from the inside too," Erdoğan said without naming any individuals, however, his comments came a few days after former Prime Minister Ahmet Davutoğlu, who resigned from party leadership in May 2016 after a growing rift with the party organization, issued an open criticism in the wake of the elections. Turkish pundits have long claimed that former President Abdullah Gül and former Deputy Prime Minister Ali Babacan are among intra-party opposition figures along with Davutoğlu. However, an intra-party leadership challenge or a move to launch a new party have not been openly attempted or made public by the aforementioned figures.

"What is going on in which province, in which district, all that information comes to us. We know it all ... For the future of this organization, we will call them to account. We're not going to carry them on our backs."

Noting that changing demands from the public requires special projects for women, youth, children, elderly, handicapped, students and other groups apart from regular municipal work as infrastructure or sanitation, Erdoğan noted that this also leads to change of profiles of mayors, demanding to have closer communication and relations with people.

Erdoğan also urged for fiscal discipline in municipalities, saying that a successful mayor that deserves his/her seat is the one that is able to create funds apart from those coming from the central government budget.

Reiterating that his party and partners MHP had paved the way to reach a common ground in Turkey, Erdoğan invited all Turkish citizens, except for those what he termed as "who had not sold their hearts and minds to external powers and terrorists," to join their alliance. He emphasized that there is no polarization in Turkey with the exception of one entity which supports terrorist organization in a veiled reference to the pro-PKK Peoples' Democratic Party (HDP).

Erdoğan reiterated his criticism for the CHP and its Chairman Kemal Kılıçdaroğlu for their cooperation with the HDP in the elections, saying that the attack targeting Kılıçdaroğlu during a fallen soldier's funeral on Sunday in the Çubuk district of Ankara was a result of this cooperation. He also accused the CHP leader of showing up in such funerals for political abuse.

During the weekend, The AK Party is expected to discuss election results, the objection process and why in some of the metropolitan cities the party's votes decreased.

Erdoğan is also expected to give the closing speech respectively on Sunday.