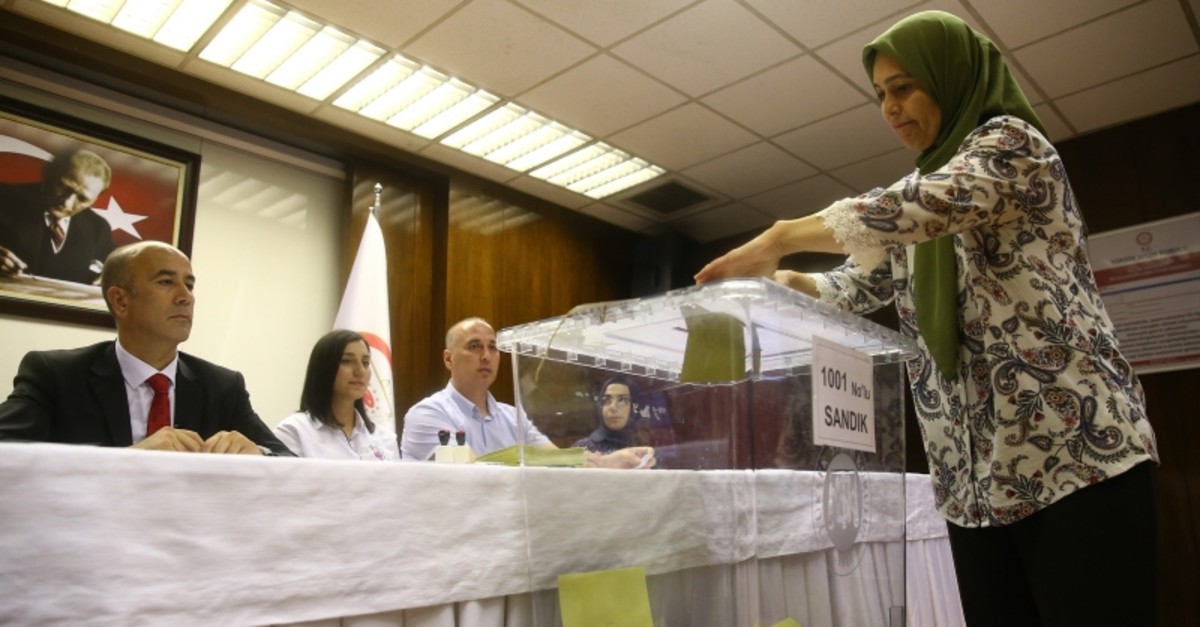 This file photo shows a simulated voting process at the Supreme Election Council (YSK) headquarters in Ankara ahead of the June 24 presidential and parliamentary elections. (AA Photo)
by Daily Sabah May 02, 2019 12:09 pm

The Chief Public Prosecutor's Office in Istanbul's Asian side has launched 32 separate investigations related to criminal complaint regarding irregularities in March 31 local elections in Maltepe, Ataşehir and Kadıköy districts, according to the official Anadolu Agency's report released Thursday.

Accordingly, some of the complaints regarding irregularities committed by balloting committees during counting and data entry processes were made by the ruling Justice and Development Party (AK Party) and its People's Alliance partner Nationalist Movement Party (MHP), while others were filed by district election boards for criminal instances during ballot counting process.

The prosecutor's office demanded related district election boards to provide vote count tallies and identity information of the balloting committee personnel in working in ballot boxes reported in complaints. Over 100 people, including balloting committee chairs, members, and personnel tasked with data entry, were then called in by the prosecutor's office as suspects to provide their testimonies.

At least 10 suspects were asked to give their testimonies in an investigation over misconduct and charges related to breach of election law.

Meanwhile, a separate investigation was launched into a newspaper's report on balloting committee chairs and members tasked by the district election board in Maltepe. Accordingly, this investigation carried out by the organized smuggling and fiscal offenses department is related to whether balloting committee chairs and members are eligible for this task.

Speaking at a press conference, AK Party Deputy Chairman Ali Ihsan Yavuz said that they are not surprised with the investigation and a team formed by the party had been working over criminal complaints for officials involved in the alleged irregularities for a while.

The March 31 local elections in Istanbul, where Nation Alliance candidate Republican People's Party's (CHP) Ekrem İmamoğlu was awarded with the mandate with only a 13,729-vote difference, were followed by lengthy discussions and objections by parties demanding a do-over election due to irregularities and unlawfulness in the elections. The AK Party submitted an extraordinary objection to the Supreme Election Council (YSK) two weeks ago to cancel and redo the municipal election in Istanbul.

The YSK is expected to announce its final judgment on extraordinary objections next week after demanding Istanbul's district election boards gather relevant evidence around objections.