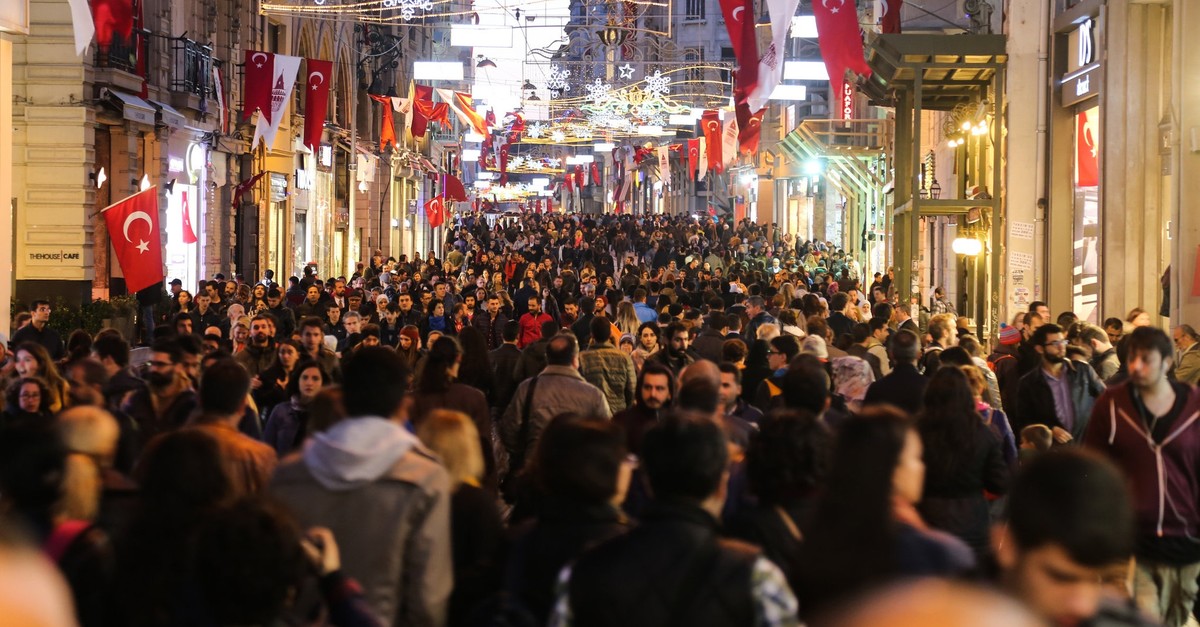 Turkey is waiting for the top election body to announce its final verdict on the recent Istanbul Metropolitan Municipality mayoral election.
by Daily Sabah May 06, 2019 12:10 am

Following its interim decision asking district election boards to investigate their respective ballot box officials that served in the March 31 elections, the Supreme Election Council (YSK) is expected to decide late today whether to annul the local elections and re-hold them. The objection process is most likely to come to an end today with the YSK's expected decision on the extraordinary objection by the ruling Justice and Development Party (AK Party) and the Nationalist Movement Party (MHP). After evaluating reports submitted by district election boards in Istanbul over alleged irregularities in the elections, the YSK will one more time give the opportunity for the AK Party to present its counterarguments and evidence. The council meeting is expected to last until late in the day. Related to the issue, AK Party Istanbul candidate Binali Yıldırım told reporters yesterday, "Post-election events have entered the legal process. The YSK will assess our party and the MHP's objections regarding the local elections. I believe the council will render its decision tomorrow [on May 6]," he added. Pointing out that the final decision should be respected by all parties, Yıldırım added that his party fulfilled its responsibilities to protect the voting rights of citizens, and now the only thing they will do is to wait for the YSK.

The March 31 local elections in Istanbul where Nation Alliance candidate from the main opposition Republican People's Party (CHP) Ekrem İmamoğlu was awarded the certificate of the election with only a 13,729-vote difference were followed by lengthy discussions and objections by parties demanding a do-over election due to irregularities and unlawfulness. After the elections, the AK Party submitted an extraordinary objection to the YSK for the Istanbul Metropolitan Municipality, Maltepe Municipality and Büyükçekmece Municipality two weeks ago to cancel and redo the Istanbul municipal election.

Although the process was almost completed, some district election boards in Istanbul failed to transfer documents regarding the balloting committees' members list issued by district governorships to the YSK to stall the process. The council has to review lists of district governorships to identify any illegal tasking of members by comparing them to the list submitted by district election boards. Relevant laws state that members and presidents of balloting committees should be public servants and reside in the respective districts where they are tasked.

On Saturday, President Recep Tayyip Erdoğan called for a re-vote in the mayoral elections in Istanbul.

"My people tell me the elections should be renewed. I have not spoken until now; I've been silent. But everyone else has spoken. Enough already. Eliminating irregularities and tampering in the elections would both clear the name of the YSK and ease the conscience of our fellow citizens," he said while addressing businesspeople in Istanbul. Stressing that corruption in the elections are as clear as day since the vote difference was reduced from 27,000 to 13,000, Erdoğan noted that in similar situations elections are re-held in every corner of the world and even in our country in the past.

Erdoğan was supported by his close ally Devlet Bahçeli, the incumbent chairman of the MHP. Bahçeli emphasized yesterday that a do-over election should be organized in line with the rule of law and ethical principles, adding that they will not remain idle when the people's will and democracy are violated. He announced that in the case of a new election, he and his party would be present and establish its headquarters in Istanbul until the new election day.

AK Party to submit petition on voters dismissed by decree

Meanwhile, AK Party Deputy Chairman Ali İhsan Yavuz said yesterday that they will submit an additional petition to the YSK regarding the ineligibility of voters previously dismissed from their public office by emergency decrees due to their links with terrorist organizations.

The YSK previously rejected a separate petition submitted by the AK Party on April 21 saying that 14,712 voters who were dismissed from public posts with presidential decrees during the state of emergency in the aftermath of July 15, 2016, were ineligible to vote and were found to have voted in Istanbul during the March 31 local elections.

Although the YSK's rulings are final and cannot be appealed, this ruling forms another area of contention since election legislation says those dismissed from public office are not entitled to vote in elections. More than 130,000 public officials, many holding positions in the government and military, have been dismissed or suspended

from their positions due to suspected involvement in the coup bid, affiliation with a terrorist organization or for posing a continuous threat.

The Council of State, the highest administrative court, later ruled in favor of the dismissals in several applications, forming precedent on this issue. However, opponents of this view say that procedures and appeals against dismissals through decrees are ongoing and that their ineligibility should be limited by a deadline as prescribed by the law. 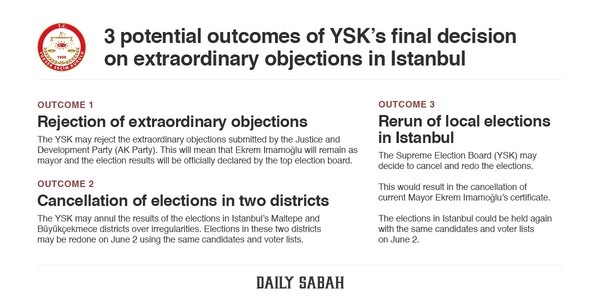 On the other hand, the CHP continues to insist that there were no irregularities in the elections and that the People's Alliance is trying to take hold of the council. Yet, recent hash remarks by CHP Group Deputy Chairman Engin Altay have drawn a lot of criticism. Altay previously said that if the YSK decides to hold a new election, "Council members cannot walk in the streets, and people will spit in their faces."

Vice President Fuat Oktay slammed these remarks by Altay, saying that the CHP has been issuing threatening statements day by day. "The YSK has the final say, and their decision is the final decision. However, the one oppressing the council is, in fact, the CHP," he added.

Lashing out at the remarks, AK Party Spokesman Ömer Çelik noted that the CHP has been getting aggressive by using threatening language. Bahçeli also commented on the issue, saying that such discourses are damaging to democracy and a sign of how the party is in despair.

Meanwhile, Ekram İmamoğlu pointed out yesterday that the AK Party and the MHP have done their objections in line with the rights provided by law, yet reiterated that there is no irregularity in the elections and the allegations are baseless.

Expressing his belief in the Council, İmamoğlu highlighted that the YSK will render the most appropriate decision today on the behalf of democracy, the people and the future of the city.