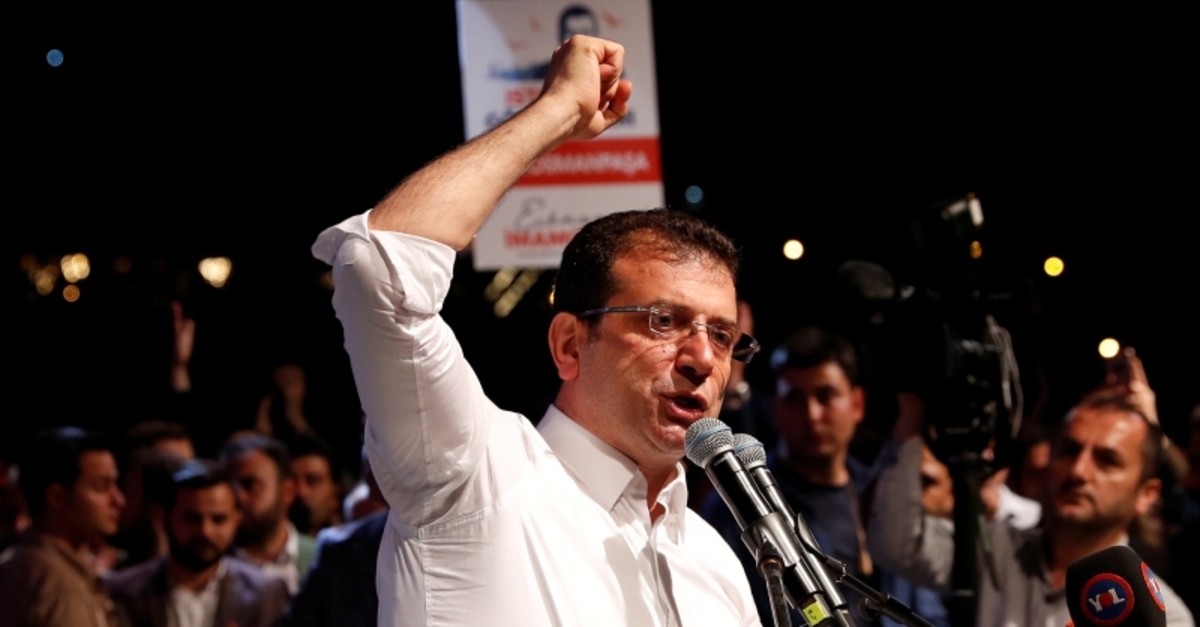 Ekrem Imamou011flu of the main opposition CHP, who was elected mayor after the March 31 elections, addresses his supporters after the Supreme Election Council decided to re-run the mayoral election, in Istanbul, Turkey, May 6, 2019. (Reuters Photo)
by Daily Sabah May 07, 2019 12:57 pm

Calls for a boycott of the rerun of the election on June 23 were widely voiced after the YSK ruled seven against four in favor of the ruling Justice and Development Party's (AK Party) application and annulled the results of the mayoral election in Istanbul., citing irregularities in the formation of the balloting committees. There were also protests late Monday in Kadıköy, Beşiktaş and Şişli districts, traditional CHP strongholds, along with other districts.

The provincial election board declared on April 17 that CHP's Ekrem Imamoğlu, who ran as a joint candidate for the Nation Alliance formed with the right-wing Good Party (IP), was the winner of March 31 election race with a slim 13,729-vote difference against AK Party's Binali Yıldırım, who ran for People's Alliance with the Nationalist Movement Party (MHP). He was presented with the official Istanbul metropolitan mayor mandate the same day amid criticism from the AK Party and MHP.

"If there is doubt in on balloting committees, then the April 16, 2017 constitutional referendum, June 24, 2018 presidential and parliamentary elections and the district mayor and city council elections, carried out with same ballots and same envelopes on March 31 along with Istanbul Metropolitan Mayor elections, should be renewed with the same criteria," the CHP said in a statement after the meeting.

"If there is a mistake in balloting committees, the responsible party is YSK alone. YSK's blame cannot be cast on voters, voters cannot be punished. YSK members should altogether resign for the crime committed against voters," the statement added.

The CHP previously condemned the decision by YSK to renew the election as "neither democratic nor legitimate."

A defiant Imamoğlu held a rally late Monday, vowing he would not give up but emerge even stronger in the next election scheduled for June 23.

"Maybe you are upset but never lose your hope," he told thousands of his supporters in the Beylikdüzü district on Istanbul's western outskirts, where he was previously mayor.

According to the final tally of the provincial election board, Imamoğlu carried the elections with 4,169,765 votes against Yıldırım's 4,156,036 votes, with a gap of only 13,729 votes. The initial difference in votes announced by the YSK was 28,000 as of the morning of April 1, the day after elections, but the gap narrowed after a partial recount in several districts.

Meanwhile, three minor communist movements that received nearly 14,500 votes, including the Communist Party of Turkey, announced they will not participate in the elections scheduled for June 23 and withdraw their candidates in favor of Imamoğlu.