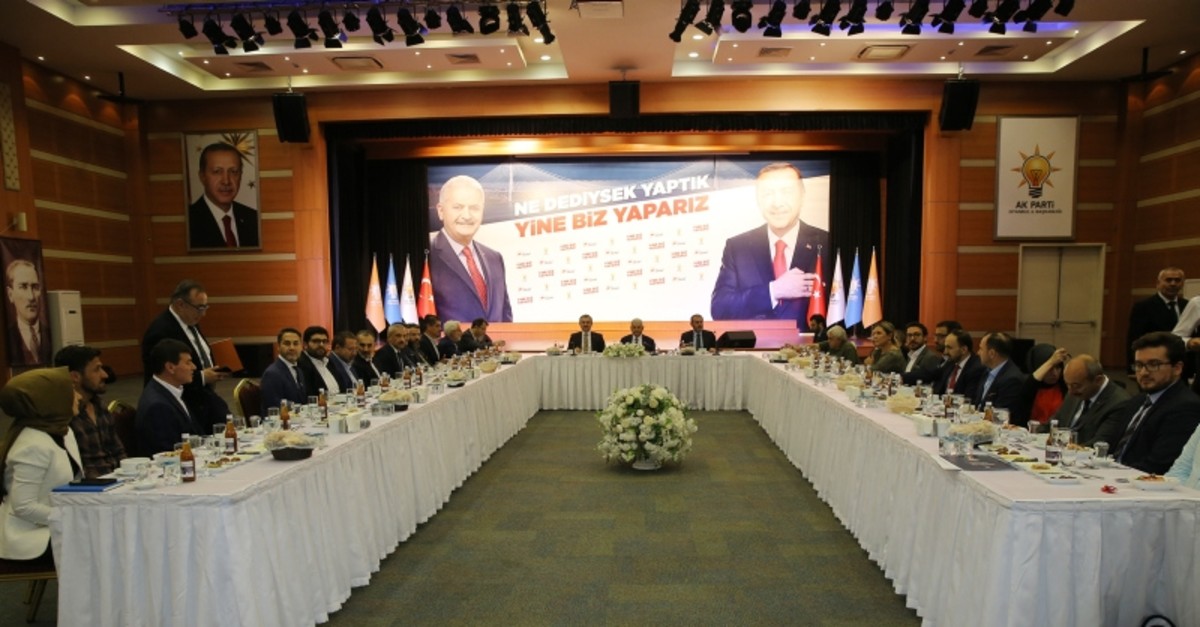 "I did what I promised before. A bright future is ahead for Istanbul," the former prime minister said in a meeting with editors-in-chief of several media outlets in Istanbul.

As part of his election pledges for youth, Yıldırım promised the city's teens a special city card that would allow them to enjoy the city's museums free of charge as well as 10 gigabytes of mobile internet services per month. He explained that the card would allow teens to enjoy city theaters for free as well, and the municipality will provide financial aid for the stationary needs of students of low-income families.

Elaborating on the "youth and students" projects, the city's students will also enjoy paid internships, and 50,000 part-time jobs will be created exclusively for the city's youth, Yıldırım said. He also promised to offer Istanbul drivers free parking for an hour, as well as removing tolls for the city's 300,000 motorcycle drivers for the July 15 Martyr's Bridge and the Fatih Sultan Mehmet Bridge.

Yıldırım also made pledges to young couples preparing to marry, such as financial aid packages, and for the families already married, he gave an assurance of write-offs totaling nearly TL 500 million for interest on debt incurred by those families.

He also said to stimulate the city's economy, young investors will be eligible for TL 100,000 in aid, while housewives will be able to apply for TL 1,000 in support for handcrafted goods. He also added that they would be able to sell their goods on an online platform.

Concerning the ongoing Uber debacle, Yıldırım said the city's taxis would be revamped to be similar to services offered by Uber. Yıldırım also promised to boost the monthly budget of the city's amateur sports clubs tenfold, from TL 10,000 to TL 100,000.

The Supreme Election Council (YSK) decided to annul the March 31 mayoral elections in Istanbul due to irregularities and unlawfulness. The YSK's decision for the Istanbul Metropolitan Municipality elections came down to a vote of four members against seven in favor on May 6. The renewed election will be held on June 23.

The elections in Istanbul saw İmamoğlu being awarded the certificate of election with only a 13,729-vote lead. The decision was followed by lengthy discussions and objections by parties demanding a do-over election due to irregularities.

Meanwhile, according to the AK Party's polls, Yıldırım's votes have increased against İmamoğlu thanks to an extensive campaign by the AK Party team for the redo elections in Istanbul. Also, the polls suggested that İmamoğlu has started to make mistakes in his campaign for the rerun.

Discounts for gas, water for families

Stressing that Istanbul's residents are almost TL 2 billion in debt, in which TL 500 million is interest, regarding unpaid water and natural gas bills, Yıldırım said the municipality will waive the late fees as part of "Social Peace."

Promising to make a 10% discount on natural gas prices, following the recent 46% discount on water bills, Yıldırım expressed that low-income families will also be supported with monthly TL 80 in aid for their electric bills and TL 50 for their gas bills. "We will also make additional discounts with mutual utility meter systems," he said.

On traffic planning regulations, Yıldırım noted that the first hour will be free in all parking areas that are owned by the municipality and he promised to build an additional 244 parking areas in the next five years.

During his election campaign, Yıldırım indicated that there are currently 770,000 parking lots in Istanbul, but in fact the city needs at least 1.75 million as 40% of the city's roads are being used for parking, worsening the traffic problem.

Istanbul, Turkey's most populated city with more than 15 million inhabitants, is notorious for its massive volume of traffic. It also has the largest number of motor vehicles compared to other cities in Turkey, at more than 4.1 million.

For educational projects, Yıldırım said that 955 kindergartens will be built in 300 neighborhoods of Istanbul, and low-income families will benefit from them free of charge. "Every district of Istanbul will have a kindergarten," he said. He added that the municipality will also support 3,128 schools in collaboration with parent-teacher associations in terms of hygiene, personnel and urgent needs. The former prime minister also announced a plan to provide free public transportation services for teachers and the residents in Istanbul's islands.

The municipality will also provide TL 8,000 to couples for their weddings and assign them facilities of the municipality and give to them 8,000 TL aid, Yıldırım stated.

Announcing his projects for disabled citizens, Yıldırım said they will receive a week-long summer holiday free of charge with their families. "There are 180,000 disabled citizens in Istanbul. We will send 25,000 disable citizens to free one-week holidays in the municipality's facilities and camps every year," he stated.

Stressing that new investments will be made to increase employment, Yıldırım said 100,000 more people will be employed every year. "With the coordination of the Family and Social Policies Ministry, we will also provide part-time job opportunities for 50,000 young people. They will provide the budget, and we will provide the jobs," he said.

Yıldırım added that young entrepreneurs will be provided cash support of up to TL 100,000, especially those with projects on informatics, coding, software, artificial intelligence (AI) and big data analysis.