With less than a week left to polls, live debate to sway undecided voters 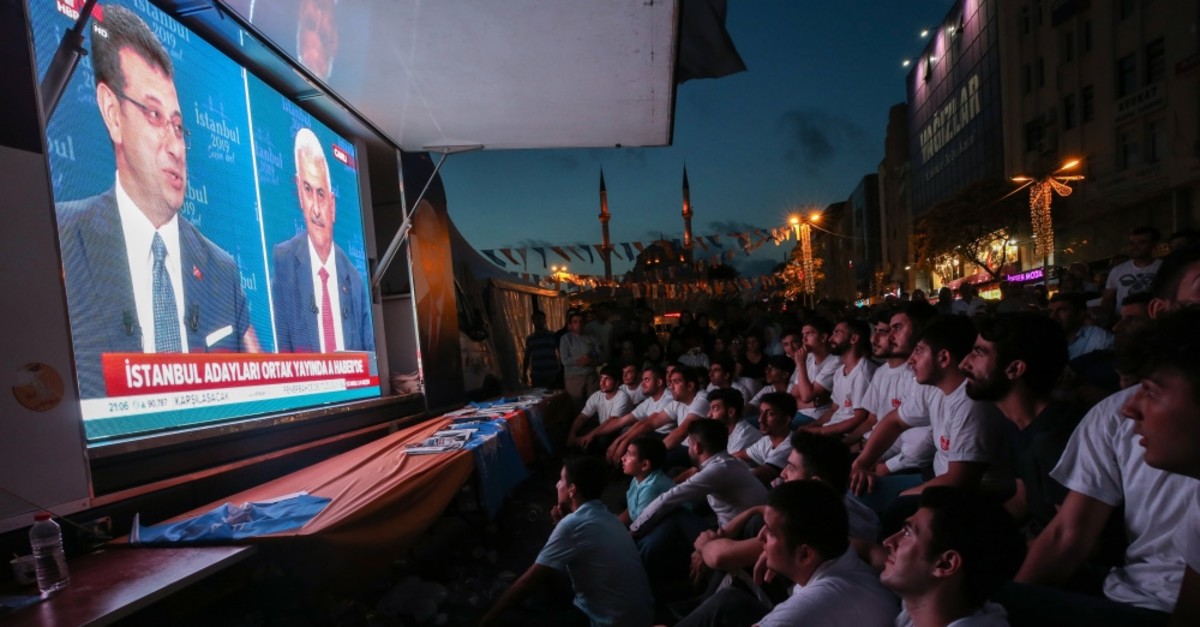 The candidates' performances in the first televised live debate in years are expected to create an impact, attracting undecided voters and motivating their voter bases

With less than one week remaining for the mayoral election rerun in Istanbul, the live televised debate between the two major candidates on Sunday night added spice and zest to the campaigning period as it attracted millions of viewers.

According to experts, while the debate is not likely to sway voters, it will be quite effective for undecided voters. This is quite significant for the June 23 polls since undecided voters are expected to determine which candidate is going to win.

Millions of Turkish citizens tuned into the debate between People's Alliance candidate Binali Yıldırım and Nation Alliance candidate Ekrem İmamoğlu, gathering in squares and cafes to watch the live broadcast on seven TV channels and many YouTube channels. The debate between Istanbul's top two mayoral candidates at Istanbul's Lütfi Kırdar Congress Center started under the moderation of veteran journalist and TV presenter İsmail Küçükkaya and lasted for nearly three hours. A&G Research Company General Manager Adil Gür said both candidates were more concerned with not making mistakes rather than establishing superiority over their rival. At the end of the day, the debate was good for our democracy, commented Gür.

"I do not expect that the debate will have a significant effect on polarized voters. Voters in Turkey have been acting in separate blocs in a very polarized political environment for a long time. That's why this debate could not result in transitions between opposite blocs," he added.

"However, even if it exerts influence on voters who are undecided or who did not participate in the previous elections, it would be very effective to determine the results," added Gür, speaking about the very close race between the two candidates on March 31.

While many candidates had the opportunity to explain their projects and pledges, the debate was heated when both candidates talked about the March 31 elections and beyond.

Many wonder how and to what extent the live debate will affect the voters' preferences a week ahead of a rerun of polls in the Turkish megalopolis, home to some 16 million people.

İhsan Aktaş, the president of the GENAR Research Institute, said the debate was important for Binali Yıldırım to motivate AK Party's voter base. Underlining that the opposition bloc was already motivated, Aktaş said, "It was more important and beneficial for the ruling party to motivate its voters."

Yıldırım usually preferred the pronoun "we" with 84 uses while using "I" two times. On the other hand, İmamoğlu used "we" 15 times while using the subject "I" 75 times.

İmamoğlu also said "I do not know" 10 times, "I have no information" eight times and "I have nothing to do with this" six times. 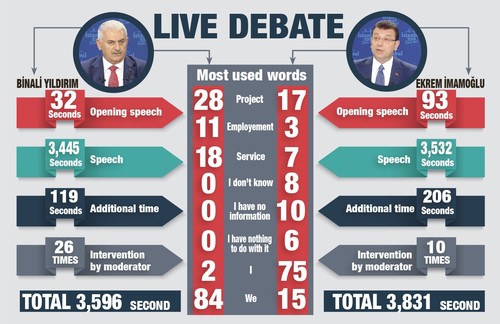 Küçükkaya opened the debate by asking each candidate to weigh in on what happened in the March 31 elections and the rationale behind the decision for a rerun.

Yıldırım insisted that his Justice and Development Party (AK Party) did not prefer a rerun, but the opposition Republican People's Party (CHP) did not accept its suggestions for a full recount of the vote.

"Our preference was not to renew this election. We tried very hard for this, but the CHP did not help us. They refused our request for a full recount and rejected the decision, so we had to go to the election," he said, adding that "stolen votes" necessitated the rerun.

"If my vote was tallied for the CHP or another candidate, this was theft. There's no explanation for this," he added.

İmamoğlu fiercely refuted his opponent's assertion that votes had been stolen, asking who had stolen the March 31 election, in which he was briefly named mayor before Turkey's election authority overturned the results over irregularities and illegalities.

"Are your words for AK Party polling officials for the Good Party [İP], for the MHP [Nationalist Movement Party] or the CHP or for the heads of balloting committees?" he asked.

"The renewed election is a struggle for democracy, it's not just a local election," İmamoğlu added.

Speaking on İmamoğlu's attempt to copy data from Istanbul Metropolitan Municipality during his brief tenure in office, Yıldırım said, "This copying data work is a FETÖ [Gülenist Terror Group] tactic. FETÖ did it in its history," referring to the group behind the failed 2016 coup attempt in Turkey.

Yıldırım stressed that three experts from outside the municipality were also appointed for the process of copying the data.

"This is a disastrous thing in itself," he added.

In response, İmamoğlu said a mayor could do any work or examination regarding his city's government. He also said the process posed no security risk.

Commenting on the effectiveness of the candidates' performance, Gür stated that voter behavior is generally affected by polemics in debates and added, "There was no polemic between the two candidates. Every voter probably found their own candidate successful."

Saying that İmamoğlu followed an agenda based on aggressive allegations, Aktaş added that Yıldırım calmly falsified these allegations.

But Yıldırım disputed this, saying: "There is no such figure in the court of accounts report."

He added that the report actually found TL 108,000 in irregularities, not the larger figure quoted by İmamoglu, which he said had been repeatedly disproved.

The statement released by the court yesterday of accounts on May 23 also was confirmed by Yıldırım, saying that there are no released reports on municipality accounts for 2018 or 2019.

İmamoğlu also repeatedly rejected allegations that he insulted the governor of northern Ordu province, despite video footage that paints a different picture.

The AK Party candidate promised to create some 500,000 more jobs for Istanbulites by attracting more investors through new projects in the next five years.

He also announced the establishment of a technology base in the city if he is elected mayor. The base will facilitate big data processing as well as a center for artificial intelligence.

Yıldırım also touched on AK Party's success in women's workforce participation rate, noting the ratio of employed women has risen from 21 percent to 34 percent in the last 16 years of his party's rule.

Yıldırım said housewives are needed as they bear the responsibility of both children and the house.

He said they will contribute a family budget of up to TL 1,000 for the handcrafts of housewives.

Expressing that one in four families in Turkey are under the hunger threshold, İmamoğlu said they are planning to provide up to TL 2,020 to financially support these families.

He added that this will be an average of TL 6,000 to TL 13,000 per year, which will be shared with the mother of the house. İmamoğlu said jobs will be created for 200,000 people who register with the Regional Employment Office.

Transportation a major concern in Istanbul

Yıldırım said every year they will add 50 kilometers to Istanbul's railways, increasing the existing 233-kilometer-long rail lines to 518 kilometers in the next five years.

Mentioning the same issue, İmamoğlu stressed finding solutions with the main actors in the sector, such as drivers of buses, taxis, shuttles and other mass transport vehicles.

He also indicated allowing toll-free access to taxis and minibuses to use bridges in the city.

Speaking on transportation, he said transportation will be free for children under 12 and mothers who have babies 4 years old and younger. İmamoğlu added that a 40 percent discount will also be provided for those under the age of 25 without the condition of being a student. İmamoğlu stressed he plans to fight poverty by providing some free-of-charge opportunities for the people working as volunteers in municipal services.

Yıldırım also pledged that his administration would provide 10 gigabytes of free internet for the youth, in addition to making entry free to municipality museums, theaters and sports facilities.

Both candidates promised to increase green space in the city. Yıldırım said he would create 20 "green corridors" and integrate them with Istanbul's northern forests and planned "public gardens," greatly boosting the city's green space.

"There will be hiking, cycling and picnic areas around the corridors," Yıldırım said, adding that there will also be playgrounds in each neighborhood of the city if he is elected. İmamoğlu vowed to add 30 million square meters of green space to Istanbul.

Regarding the situation of over 500,000 Syrian refugees living in Istanbul, İmamoğlu said, "We will establish a special unit to address the Syrian refugee crisis in Istanbul. We will hold a refugee population census, especially among children."

İmamoğlu also said Turkey has not handled the issue well, and it has had to do it on its own, without international help, adding that there are 547,000 registered Syrian refugees in Istanbul, or some 4 percent of the population. Commenting on İmamoğlu's idea to build a special unit for Syrian refugees, Yıldırım said such a section already exists but "could be strengthened."

Responding to the same question about Syrian refugees living in Istanbul, Yıldırım answered, "Syrians living in Turkey are under temporary protection. They will return home. Nearly 500,000 people returned to areas liberated from terrorists by Turkey and more will leave after the area east of the Euphrates is cleared." He also said Syrians living in Istanbul who disturb the peace or engage in illegal activities would be apprehended.

Yıldırım also agreed with İmamoğlu that Turkey has not gotten enough international support on the Syrian refugee issue.

'Voters in Istanbul will have the final word'

Yıldırım and İmamoğlu are vying for the Istanbul mayoral seat again after the Supreme Election Council (YSK) ordered a rerun of the March 31 Istanbul polls.

The results of the vote were canceled after the ruling AK Party and MHP appealed to the council, citing irregularities and violations of election law.

The two candidates concluded the evening by taking a photo together with their family members and Küçükkaya in a show of unity.

In the final week, the candidate who will motivate and mobilize his voter base will be successful in the elections, said A&G Research Company General Manager Gür and added that candidates' speeches and projects will not be effective to make voter transition between opposite blocs.

Commenting on the campaigning process before the elections, GENAR Research Institute President Aktaş said, "The YSK decision initially worked for the opposition, however, the AK Party closed the gap recently."

Addressing reporters yesterday, Binali Yıldırım evaluated the debate and said voters in Istanbul will have the final say about the debate.

"We said what we had to say. Everyone watched, evaluated and commented. As I see it, they evaluated it in detail and the citizens listened. They will make their decision on Sunday," he added.