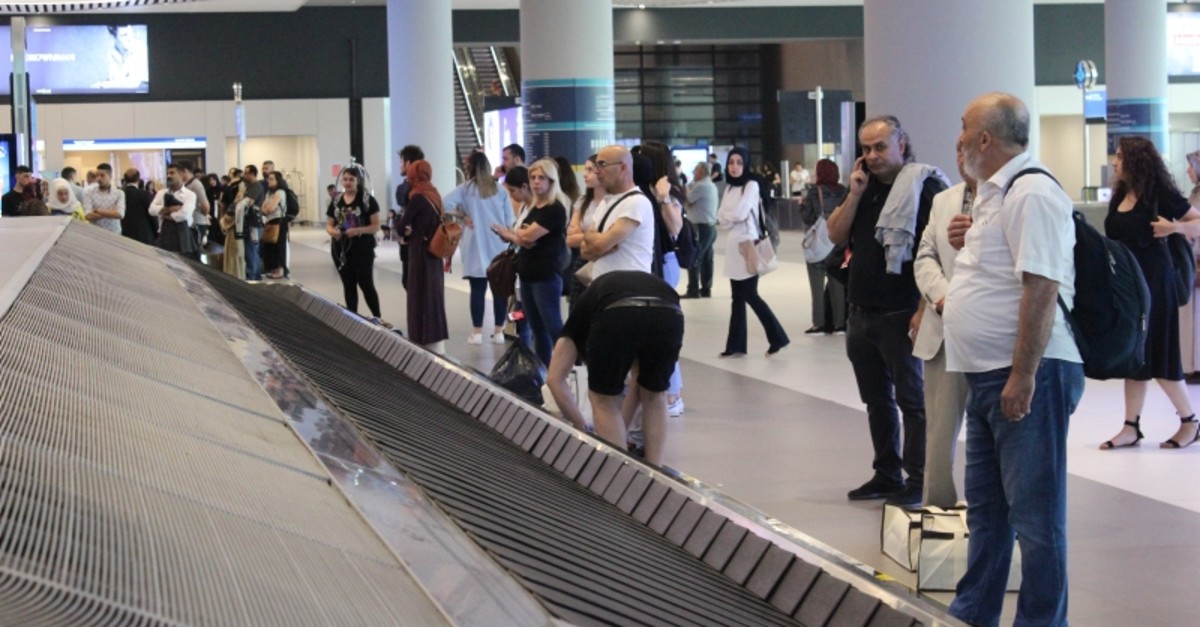 Hundreds of thousands of Istanbulites were returning to the 15-million megacity from their hometowns and southern resorts on Saturday to vote in the highly anticipated mayoral election rerun on Sunday.

As spring came to an end, many people proceeded with their annual routine and left the city to spend the summer in their summerhouses or villages, and the volume of the exodus increased after the end of school year on June 14.

However, Turkey's top election body Supreme Election Council (YSK) canceled the results of Istanbul mayoral election on May 6 and set June 23 as the date for a rerun, prompting a reverse mass exodus often witnessed during long national and religious holidays.

Some 10.5 million voters will head to the polls to cast their votes on June 23, which is expected to be a tight race between the two leading candidates of the March 31 nationwide local elections. Republican People's Party's (CHP) Ekrem Imamoğlu, the candidate of Nation Alliance with the Good Party (IP) and backed by the Peoples' Democratic Party (HDP), and Justice and Development Party's (AK Party) Binali Yıldırım, the candidate of the People's Alliance with the Nationalist Movement Party (MHP), will vie to run the metropolitan municipality of Turkey's economic and cultural capital.

Istanbul's main gateways, especially domestic arrival terminals of the newly-inaugurated Istanbul Airport, Sabiha Gökçen Airport and Esenler July 15 Democracy Bus Station were busiest than normal. Many others are also believed to arrive in the city with their own cars.

In Istanbul Airport, both the exit areas and baggage claims were crowded, and planes arriving from Antalya, Sivas, Trabzon, Malatya, Diyarbakır and Izmir were full. Mehmet Emen, who flew in from Diyarbakır, told Ihlas News Agency that normally he had things to do in Ankara but changed his plans to cast his vote first.

Dursun Çağlayan and his wife arrived from northern Turkey's Trabzon, the hometown of Imamoğlu. "We have businesses both in Trabzon and Istanbul," saying that several members of his family will cast their votes in Istanbul and return to Trabzon. 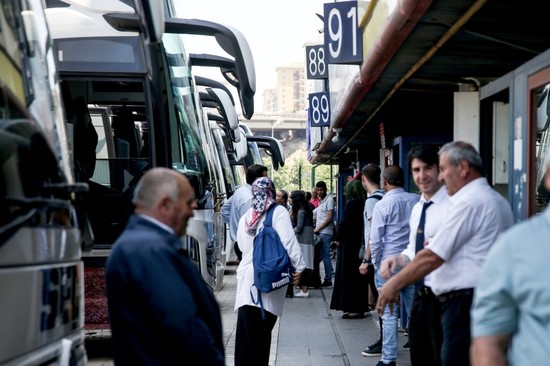 Vehbi Kaya traveled more than 1,000 kilometers from eastern province of Erzincan, the hometown of Yıldırım, to vote in the election. Kaya told Anadolu Agency in that he wasn't in Istanbul for the last couple of months and did not vote in the previous election, but will vote this time and use the occasion to visit several relatives.

Having left Istanbul for the occasion of Ramadan Bayram (Eid al-Fitr) in early June, Hatice Sevinç returned from southern city of Antakya by bus to cast her vote in the rerun. "May those who will serve win and take over, rather than parties," Sevinç said, adding that she will return to Antakya with her grandchildren after the election.

In addition to planes, trains and intercity coaches, both the ruling Justice and Development Party (AK Party) and the main opposition Republican People's Party (CHP) have launched hundreds of buses and minibuses throughout Turkey to carry voters back to Istanbul.

Mehmet Cavit Şireci, the provincial chairman of the AK Party in Erzincan, told reporters Saturday that their election transfer commission had sent off 37 voters buses to Istanbul, in addition to nearly 500 people who departed for Istanbul with their own means.

Ali Celiloğlu, deputy provincial chairman of the CHP in eastern Malatya province, said more than 20 buses have departed for Istanbul.

Resort towns in the Aegean and Mediterranean, normally packed during this time of the year with vacationers from Istanbul, had an appearance of almost deserted settlements except for natives and foreign tourists, who seem to be enjoying their brief calm.

In Antalya, dubbed Turkey's tourism capital, hotels and beaches were nearly empty while long queues were formed in domestic departure terminal of the city's airport.

Ülkay Atmaca, the chairman of the Professional Hotel Managers Association (POYD), told IHA that both accommodation sector and transport sector have greatly supported voters to facilitate their return to Istanbul to vote. "There were no reservation cancellations but rather changes in dates. This is actually trust to democracy, I think of it as a good step to look after Istanbul. Yes, the facilities will be empty for one day but what matters is that the democracy wins," Atmaca said, adding that both sectors offered free change options to vacationers once the re-run date was set.

Three airliners have organized 30 trips to Istanbul from Milas-Bodrum Airport serving the Aegean resort town of Bodrum. Cihan Yavaş, who owns a business in Bodrum's Bitez neighborhood, told IHA that currently 95 percent of their customers are foreign tourists. The AK Party district organization has arranged 10 buses for Istanbulites in Bodrum while the CHP arranged 31 buses.

The beaches of the Gulf of Edremit area, where resort towns of Ayvalık, Burhaniye, Gömeç, Akçay and Altınoluk are located, were nearly empty, according to Demirören News Agency's (DHA) report. The region is one of the closest summer destinations to Istanbul, where some 140,000 summerhouses mainly owned by Istanbulites are present. Local organizations of the AK Party and the CHP have organized nearly 300 buses to carry voters.

Metin Palay, who runs a café in Akçay beach, said the town was nearly empty on Saturday, and local shopkeepers are thinking of having a day off on Sunday as many of the remaining people in the area also expected to leave to cast their vote.

Why the re-run election is being held?

Millions of Turkish voters cast their votes nationwide on March 31 in local elections to choose mayors, city council members, mukhtars (neighborhood officials), and members of elder councils for the next five years. The turnout was 83.88%, six percentage points lower than the previous local elections of March 30, 2014.

In Istanbul, Imamoğlu received 48.8% of the vote, whereas Yıldırım got 48.55%, according to official figures from the YSK. AK Party won 24 district municipalities across the province, while the CHP won 14.

The results in March were canceled after AK Party the MHP appealed to the YSK, citing irregularities and contradictions with legal measures, leading to the annulment of Imamoğlu's mayoral certificate awarded by the provincial election board on April 17.

The YSK ruled in favor of a re-run, with seven votes in favor and four against. Some 30,281 votes in 108 ballot boxes were declared invalid due to vote-counting sheets being unsigned or absent altogether, the YSK said in its detailed ruling. Also, balloting committee chairman who were not civil servants as prescribed by law served in 754 polling centers in the March 31 mayoral elections in Istanbul.

The YSK said this practice was unprecedented and influenced the difference between Imamoğlu and Yıldırım, a slim margin of 13,729 votes that fell from original 29,000 after appeals and recounts, and therefore raised questions on the validity of results.

YSK chief Sadi Güven said all eligible voters who cast their ballots in the March 31 poll would be able to do so again in a re-run vote for Istanbul's metropolitan mayor. However, 44,852 voters were removed from the electoral lists due to conviction, military service or death.

On the March 31 elections, voters chose from among 32 candidates -- 24 of them independent -- on the ballot.

This time, there will be only 21 candidates, including nominees from AK Party, the CHP, the Felicity Party (SP) and the Patriotic Party (VP) along with 17 independent hopefuls.

How did parties react to the re-vote?

The Democratic Left Party, (DSP) Independent Turkey Party (BTP), Democratic Party (DP), Communist Party of Turkey (TKP), Labourist Movement Party (EHP) and Communist Movement of Turkey (THK) withdrew their candidates in order to protest the YSK decisions to re-run the election, with a few of them and other minor parties declaring their support for Imamoğlu while others remained neutral.

The total votes for the withdrawn six parties counted at roughly 94,500, which is set to be a highly relevant base considering the final difference between Imamoğlu and Yıldırım was only 13,000 votes.

President Recep Tayyip Erdoğan, who is also the head of AK Party, rebuffed critics of the new vote.

"Our sole purpose in this [election] process has been to ensure that the outcome of the national will was recorded in the most accurate and healthy way," said Erdoğan.

"Those who are on vacation should return [to Istanbul] and cast their votes," said Kılıçdaroğlu.

The CHP said it aims to place a lawyer to preside over each ballot box to monitor the voting process.

Noting that there are 76 election boards in Istanbul, the CHP said it would assign one of its parliament deputies to each board responsible of counting the ballots.

Meanwhile, AK Party said it would assign at least nine officers to each box.

Prior the election, Yıldırım and Imamoğlu on June 16 sat down for a televised debate a week ahead of the re-run polls.

This was the first and long-awaited political debate between major candidates after AK Party won the general elections 17 years ago.

During the debate, moderated by veteran journalist and TV presenter Ismail Küçükkaya, Yıldırım stressed that AK Party had first proposed a recount of all invalid ballots, not a new election, but that the opposition failed to cooperate.

"If my vote was tallied for the CHP or another candidate, this was theft," he said.

For his part, Imamoğlu rejected the accusations of voting theft and characterized the Istanbul re-vote as part of the fight for democracy, "not just a local election."

Moving on to election promises, Imamoğlu said if elected, he would assign a desk to look exclusively into Syrian nationals living in the city. Istanbul is home to hundreds of thousands of Syrian migrants and refugees from other nations.

Yıldırım said Syrians were already active in the social and working life in Istanbul and that municipal initiatives on the issue "already exist", though that they could be strengthened.

Both candidates agreed that Turkey has not yet received enough international support on the Syrian refugee issue.

They also promised to create new jobs for Istanbulites through new projects and municipal employment offices, as well as to increase green space across the city.

During campaigning, both CHP and AK Party leaders and candidates attended several meetings in different districts of the city and held nearly daily public demonstrations.

Both parties conducted active election campaigns with advertisements via a variety of media outlets on TV and radio.

After this, the ban prohibits political advertisements on all broadcasters, news about the election and its results or any predictions about its outcome.