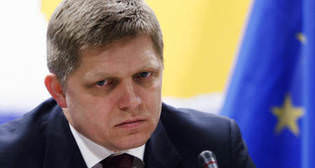 by Mar 05, 2014 12:00 am
Istanbul (Daily Sabah) - Slovakia's Prime Minister Robert Fico sent an official letter to Turkish Prime Minister Recep Tayyip Erdoğan to begin their final stage of a country-to-country agreement for a 5,000 megawatt electrical power plant project in Konya-Karaman, Turkey The project will be developed by Singa Energy Solutions (SIGNA), based in Bangkok, Thailand, in cooperation with Slovakia, a member of the European Union.

SINGA Chairman Alexander Misir announced his company is committed to the Republic of Turkey for this project. Financing will be secured and backed by the Slovakian Export-Import Bank and its affiliates. The project will involve companies from several countries, including the Czech Republic, Germany, Russia, Slovakia, Thailand, Turkey, and the United States.

Misir and senior advisor to the Slovakian minister of economy, Vladimir Pristas met with the governors and mayors of Konya and Karaman. Misir briefed attendees on the project and said it will provide 4,000 to 5,000 local jobs in the short term. In the long term, the additional electrical energy will create new business growth in Turkey and help ensure sustained availability of lectricity.

Misir also announced that SINGA is conducting project studies for future opportunities, including how to best utilize
Lignite fuel from Konya-Karaman in an environmentally friendly manner and how to build the largest and most sustainable power plant while remaining financially feasible. The estimated foreign investment into Turkey for the KonyaKaraman power plant roject is more than $10 billion.