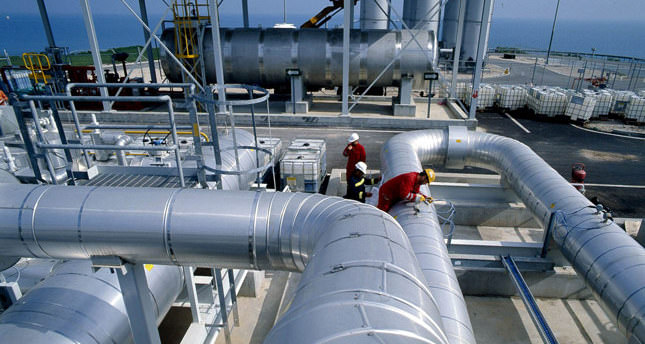 by AA Apr 09, 2014 12:00 am
ANKARA — The oil flow through a Turkey-Iraq pipeline, which stopped on March 1, will resume within one week, said Iraq's oil minister, Abdal- Kareem Luaibi, during a joint press conference Wednesday with the Turkish energy minister in Ankara, Turkey's capital.

Luaibi said that the flow stopped due to technical problems resulting from "terrorist attacks" on the pipelines on the Iraqi side, as well as the malfunctioning of Turkish Petroleum Pipeline Corporation's (BOTAS) pumping stations.

Yildiz said that as of April 9, Turkish Petroleum Corporation (TPAO) and other consortium members are beginning to conduct $US25 billion worth of energy trade in Iraq, adding that TPAO's share is around $US5.5 billion.

"We currently have two natural gas and two oil projects, and we have to produce eight million barrels of oil per day," Yildiz said.

Luaibi said Irbil and Baghdad will reach a reconciliation on the oil export issue on the long-running row between the Kurds in Iraq's north and the central government in Iraq over how to share oil revenues within the next two days at most.

On March 20, in a bid to resolve the dispute, KRG Prime Minister Nechirvan Barzani announced that his government would accept the export of 100,000 barrels of oil per day through Iraq's state-run oil company, SOMO, from April 1 as a "gesture of goodwill", while negotiations for a permanent deal with Baghdad continued.