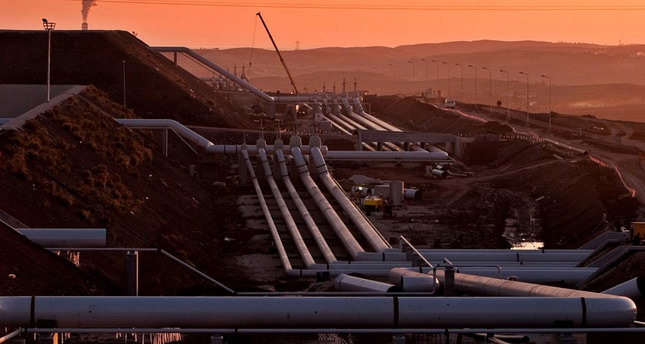 by AA Apr 19, 2014 12:00 am
ANKARA — Turkey's importance in world energy markets is growing - both as a regional energy transit hub and as a consumer, according to a U.S.-based energy research institute.

According to an analysis on Turkey published online by the Energy Information Administration, the country's role as an energy hub has become increasingly important due to it geopolitical value.

As well as being located at the crossroads between the oil-rich former Soviet Union and Middle East countries, the east of the country holds nearly 70 per cent of world's proven oil and natural gas reserves.

And to its west lie the European energy markets, which consume nearly the 70 per cent of world's energy resources.

The oil-rich Caspian and Middle Eastern countries have formed connections with Turkey in order for their exports to reach to some of world's biggest consumers in Europe.

Turkey's largest oil pipeline by capacity - the 1,000km-long Kirkuk-Ceyhan line - serves as a transport pipeline for Iraqi oil and consists of two lines with a capacity of 1.65 million barrels a day (bld).

The Baku-Tbilisi-Ceyhan Pipeline (BTC) - Turkey's longest line at 1,750km - has a capacity of 1.2 million bld.

It transports Azeri light crude - mainly from the Azeri-Chirag-Guneshli field - via Georgia to Turkey's Mediterranean port of Ceyhan for further export via tankers.

Kazakh crude oil has also been shipped via the BTC since 2008.

The Ceyhan terminal port, on Turkey's Mediterranean coast, serves as an outlet for oil exports from northern Iraq and for both oil and natural gas exports from Azerbaijan.

Currently, almost 1.5 million barrels of Iraqi crude oil are stored in Ceyhan for export, according to Turkey's energy ministry.
Another important strategic asset for Turkey is the Turkish Straits.

The Bosphorus and the Dardanelles Straits, which together comprise one of the world's busiest chokepoints, saw 3 million bld of oil and oil products travel through by tanker to Western markets last year.

Besides its international pipelines, Turkey has two domestic ones: the Ceyhan-Kirikkale Pipeline which, at a length of 450km and capacity of about 100,000 bld, delivers imported crude oil from Ceyhan to the Kirikkale refinery near its capital of Ankara.

Meanwhile, the 515km-long Batman-Dortyol Pipeline transports domestically-produced crude oil from the southeastern province of Batman to the terminal in Dortyol on the Bay of Iskenderun near Ceyhan.

Turkey distributes natural gas via its central pipeline network to various cities and consumers within the country as well as to Greece, which receives the gas as a re-export of Azerbaijani gas via the Baku-Tblisi-Erzurum (BTE) pipeline.

Turkey receives 59 per cent of its total natural gas imports from Russia, according to Eurogas, an alliance of European natural gas companies.

Turkey imports 25.5 billion cubic meters (cbm) of Russian natural gas via the Blue Stream pipeline and West Line, which carry Russian gas via a pipeline from Bulgaria to Turkey, according to Gazprom.

The BTE pipeline supplies Turkey with about 3.5 billion cbm of Azerbaijani gas, whereas Turkey imports almost 6 billion cbm of Iranian gas via the Tabriz-Dogubayazit pipeline.

Turkey must be able to import enough gas to satisfy both domestic demand and any re-export commitments, as well as provide enough pipeline capacity to transport Caspian natural gas across Turkey to Europe, it says.

The Trans Anatolian Natural Gas Pipeline (TANAP), on which construction has already started, could prove one of the most strategic projects in helping Turkey fulfill its ambition of becoming an energy hub.

TANAP is part of a project which will carry Azerbaijani gas via Georgia and Turkey to Greece, and from Greece to further European markets.

It is expected to initially provide 16 billion cbm of natural gas per year by 2019, which could later increase to 23 billion cbm by 2023.

Other proposed pipelines include; the Interconnector Turkey-Greece-Italy Pipeline (ITGI), which currently operates between Turkey and Greece; the Turkey-Iraq Pipeline, which would supply Iraqi gas to European markets and Turkey; and the extension of the Arab gas pipeline to Turkey, which would allow deliveries from Egypt to Turkey via Jordan and Syria.

The ongoing tensions in Ukraine and mounting European concerns over energy security only add to the importance of Turkey as an economically and politically stable alternative route of pipelines, which could carry more of the Russian, Caspian and Middle Eastern resources to Europe.

As an energy market, Turkey has seen one of the fastest growth rates in energy demand among the countries in the Organization for Economic Cooperation and Development (OECD) over the last three years.

The International Energy Agency forecasts energy use will continue to grow at an annual rate of about 4.5 percent from 2015 to 2030, approximately doubling over the next decade.

Turkey last year consumed 734,800 bld of liquid fuels, of which more than 90 percent come from imports. Iran supplied 35 per cent of its crude oil imports, having replaced Russia as its largest source for imports.

Natural gas consumption - mainly used in power generation and space heating in Turkey - has increased rapidly over the past decade.
It reached a peak of more than 45 billion cbm in 2012 and is expected to grow in line with its economic growth.

The power sector consumed approximately 53 million cbm per day in 2009, doubling from around 22.5 million cbm in 2000, according to data from PFC Energy, a consulting firm specializing in the oil and gas industry.

Residential use also nearly doubled, while industrial consumption tripled over the same period.

Turkey imported approximately 45 billion cbm of natural gas in 2012, with 56 percent coming from Russia and 18 percent from Iran, mainly via pipelines.

Turkey imported 23 per cent of its total coal supply in 2012, and volumes of imported coal are expected to rise in the future because of the projected increase in electricity demand.

Turkey had total recoverable coal reserves of 2.3 billion tonnes at the end of 2012, according to BP's Statistical Review of World Energy 2013.

It has also started building a nuclear plant in Akkuyu near Mersin province on its Mediterranean coast to meet its ever-growing demand for electricity.

It also has plans to build a second nuclear plant in the port city of Sinop on the Black Sea coast with a Franco-Japanese consortium, and a third in the north-western Kirklareli district with domestic funding.