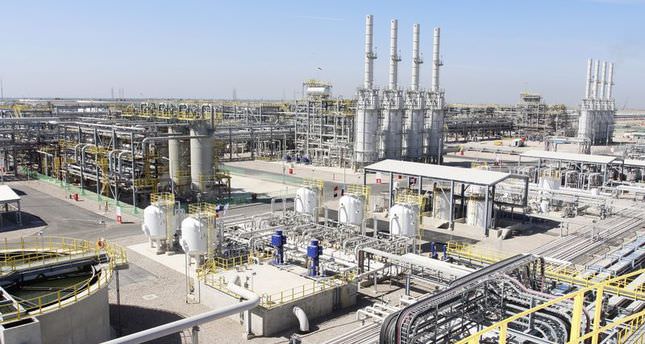 by AA May 09, 2014 12:00 am
ANKARA — Iraq's oil and natural gas reserves hold great importance for Turkey, a country which is highly dependent on imports for energy consumption.

Iraq has been struggling to stabilize politically since the US invaded in 2003 and removed the Baathist regime of Saddam Hussein, yet Iraq has become Turkey's second largest trade partner after Germany. As of 2013, Iraq and Turkey have a trade volume of $12 billion.

Even if Iraq was to overcome its problems in production, the unresolved question is how this gas will reach international markets. Turkey's Southern Gas Corridor project, which will supply Europe with gas from Azerbaijan via Turkey, seems like the most viable option.

Michael Knights, a fellow at the Washington Institute for Near East Policy, told the Anadolu Agency that the key problems facing federal (southern) Iraq in the hydrocarbons sector is the lack of administrative capacity and human capital to process dozens of strategic projects simultaneously. "Iraq lacks both administrative capacity and human capital. So key bottleneck projects like Basra oil storage and export facilities, or water injection facilities for upstream fields, hardly progress at all for years," Knights said.

Knights explained that a possible solution to the current impasse between KRG and Baghdad would be to ratify the 2014 Iraqi budget, with no punitive clauses that could threaten KRG's budget.

"The Kurds should export oil in collaboration with the state marketer SOMO, with Baghdad remitting the oil revenue directly back to Iraqi Kurdistan. This is what the Americans, the Turkish government, IOCs and even Baghdad ultimately want. It is a win-win-win solution," Knights said.

The KRG region of northern Iraq is believed to have one of the largest untapped oil reserves in the world, with more than 45 billion barrels of oil according to some estimates. In November 2013, KRG signed an agreement that would enable Kurdish oil to flow to Turkey's port of Ceyhan.