Pipeline for Israeli gas on the table 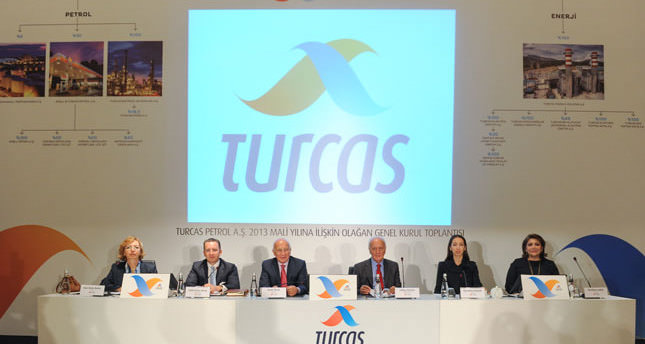 ANKARA — Turkish energy company Turcas Petrol announced that they are considering to build a pipeline for natural gas in Israel's Leviathan field. Last month Turcas informed Istanbul's stock-exchange BIST that they were in talks with Istanbulbased Enerjisa, which is owned by Turkey's Sabancı Holding and German utility E.ON, to buy the gas from the Israeli field.

Turcas CEO Batu Aksoy announced that Turcas and E.On unit Enerjisa may grow their alliance to buy Israeli gas and the company may consider building a pipeline for gas from the Leviathan field. According to Aksoy the pipeline may cost about $2 billion (TL 4.15 billion) and could supply 7-10bcm gas annually to Turkey via a 500km undersea route.

Leviathan Natural Gas Field, located in the eastern Mediterranean Sea area, off the coast of Israel, was discovered in December 2010. The discovery is situated in 1,645m of water in the Levantine Basin, located approximately 130km west of Haifa, Israel. Turkish consortium planning to transport the natural gas in Israel's Tamar and Leviathan areas through pipelines for the first stage. In the medium term the consortium also planned to add Cypriot gas to the route. The consortium envisages that 7 to 10 billion cubic meters of gas will be transported to Turkey annually through the yet-to-be built pipeline. Turcas wants to move ahead of its competitors by building a strong supply chain, following the transmission of the gas to Turkey.

EnerjiSA, which has a gas power plant of nearly 1,300 megawatts, is among the biggest natural gas consumers. The company also plans to build a new gas plant of 500 megawatts in the medium term.

On the other hand Israel's Leviathan natural gas field consortium announced earlier that developing natural gas field estimates it will cost $4.5 billion to develop the offshore well, not including infrastructure for exports. Energy experts believe that international political environment should be appropriate in order to implement major projects such as this pipeline. Therefore the conclusion of Turkey-Israel normalization talks is also important. Regarding this issue Israeli media outlet reported on Sunday that Israeli Prime Minister Benjamin will finalize the deal on his return from Japan on May 16. "We are waiting for the prime minister to return and finalize the deal," Israeli newspaper Jerusalem Post quoted an Israeli official as saying.

Furthermore, media outlets reported last month that partners of the Leviathan natural gas field has bid to supply Greek Cyprus' state-run natural gas company, DEFA, between 0.7 to 0.95 billion cubic meters (bcm) of gas annually for up to 10 years. The plan would be to build a pipeline from the field, which is located in the eastern Mediterranean between Israel and Cyprus, and supply DEFA with gas starting in 2016 or 2017.
Last Update: May 15, 2014 1:07 am
RELATED TOPICS